A ‘Revolution of Tenderness’ 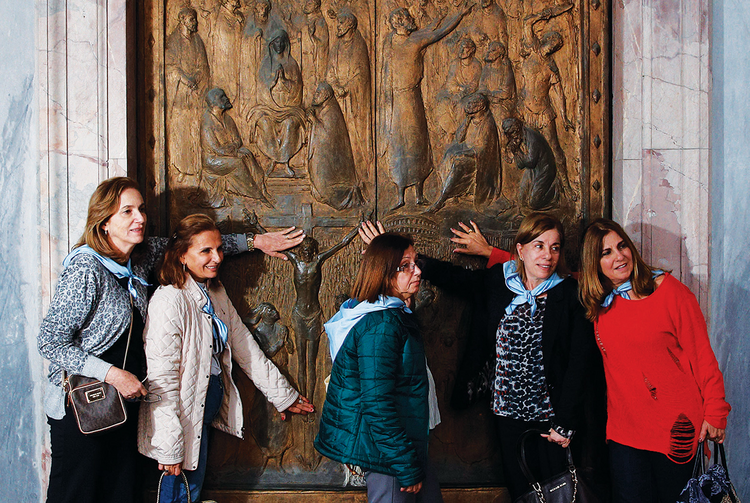 When Pope Francis planned the Year of Mercy and the opening of the Holy Door, he did not mean to give the starting signal for a frenzied wave of pilgrims to Rome. More than a call to sign up for an Eternal City package tour, the pope is inviting people to strike out on a yearlong spiritual journey to recognize a loving God who’s already knocking on their door.

He says he wants the Year of Mercy to usher in a “revolution of tenderness.”

Once people realize “I’m wretched, but God loves me the way I am,” then “I, too, have to love others the same way,” the pope said in an interview with Credere, the official magazine for the jubilee year, published just a few days before the year began on Dec. 8.

Whether in Rome or at home, Catholics will have a variety of ways to take part in the Year of Mercy. The Pontifical Council for the Promotion of New Evangelization, the office organizing events for the holy year, presented details about some of the events planned at the Vatican and the services available for pilgrims. Pope Francis will use a “very simple” ceremony to open the Holy Door in St. Peter’s Basilica on Dec. 8, said Archbishop Rino Fisichella, council president, who spoke at a Vatican news conference on Dec. 4. After reciting verses from the Psalms, the pope will open the door and lead a procession of cardinals, bishops, priests, religious and laypeople through the door, arriving at the tomb of St. Peter.

In his interview, Pope Francis revealed that he would perform a symbolic and concrete work of mercy on one Friday of each month during the jubilee year. The first such gesture would take place on Friday, Dec. 18 when Francis will open the Door of Mercy at a hostel run by Caritas Rome near the city’s central train station where for the past 25 years “persons in grave need, who require our help” have been assisted.

Archbishop Fisichella said these gestures “will be a testimony through which Pope Francis intends to highlight the major forms of need, marginalization and poverty that are present in society.” The jubilee is “a Holy Year to place mercy at the center,” Archbishop Fisichella said. In this context he said that the pope will commission some 800 “missionaries of mercy,” priests. coming from all parts of the world.Beginning on Ash Wednesday, he will give them “the mandate to be preachers of mercy and confessors full of mercy.”

Every evening until the year ends on Nov. 20, 2016, groups will take turns leading the recitation of the rosary in front of the statue of St. Peter in St. Peter’s Square.

Pilgrims who wish to walk through the Holy Door at St. Peter’s or take part in other major jubilee events in Rome will have to register in order to receive the free tickets. This can be done online at www.im.va or in person at the official pilgrim information center at Via della Conciliazione 7, on the wide boulevard that leads to St. Peter’s.

Pope Francis has asked that doors of mercy be opened on Dec. 13 in every cathedral, major church or sanctuary in the world so that people can experience a pilgrimage near their own homes.

From AP, CNS, RNS, Staff and other sources
Show Comments (
1
)
Comments are automatically closed two weeks after an article's initial publication. See our comments policy for more.
Mike Evans
5 years 9 months ago
What if every bishop in every diocese across the entire world presided at a huge communal reconciliation service which concluded with general absolution for everyone who was present? They could fill every stadium and ballpark in every major area many times over between Christmas and Easter. Millions who have stayed away and are fearful could return in droves, to sacramental life, hearing and understanding the Word of God, and beginning again to raise their families and communities in the virtuous life of grace. All that would be missing is the foolish gatekeepers.