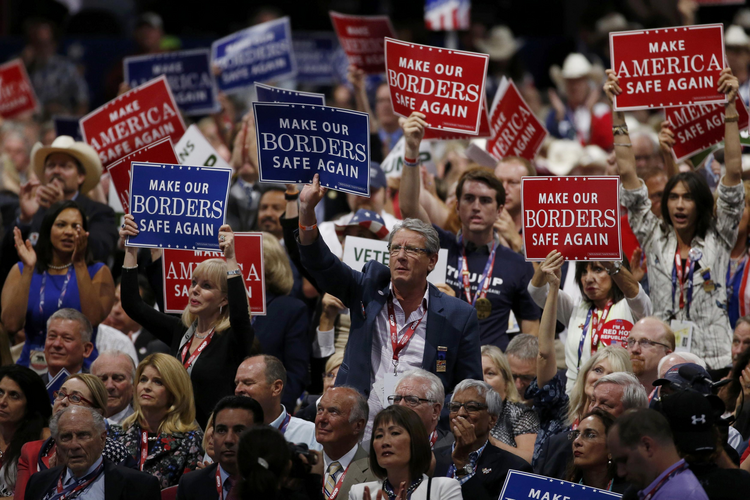 The Republican Party has adopted what Christian conservatives cheered as the most conservative party platform ever, pushing the GOP decidedly to the right on abortion and gay rights amid uncertainty about Donald Trump's policies.

The New York billionaire's campaign largely took a hands-off approach to the divisive social issues, fighting instead for an immigration policy that focuses on building a wall along the U.S.-Mexico border and a trade policy that includes "better deals" for America.

The new platform, as adopted by the Republican National Convention on Monday, represents the GOP's formal policy positions for the next four years. The document is not binding, but is intended to guide Republican policymaking at every level of government.

The 2016 platform is "the most pro-life platform ever," according to the anti-abortion Susan B. Anthony List. Christian conservatives also cheered the GOP's continued opposition to same-sex marriage and formal opposition to bathroom choice for transgender people. They also endorsed new language that condemned same-sex parenting: "Children raised in a traditional two-parent household tend to be physically and emotionally healthier, less likely to use drugs and alcohol, engage in crime or become pregnant outside of marriage."

The new language on same-sex marriage, which the Supreme Court made legal nationwide in 2015, drew passionate opposition from younger Republicans and moderate-leaning party leaders across the Northeast in the days leading up to Monday's formal vote.

"The platform is a broad statement," said Steve Duprey, a RNC member from New Hampshire. "Not everybody agrees with everything in the platform, including our nominee."

Indeed, Trump has been reluctant to embrace social conservative positions in some cases, particularly as Republicans across the country push for new restrictions on bathroom access for transgender people.

Trump, who claims strong support from the gay community, has invited transgender celebrity Caitlyn Jenner to use whichever bathroom in Trump Tower she'd like. He also said North Carolina's so-called "bathroom law," which directs transgender people to use the bathroom that matches the gender on their birth certificates, has caused unnecessary strife.

Yet Republicans on Monday let stand language that attacks the Obama administration for directing schools to allow transgender students to use restrooms and other facilities that match their gender identities. "Their edict to the states concerning restrooms, locker rooms and other facilities is at once illegal, dangerous and ignores privacy issues. We salute the several states which have filed suit against it," reads the platform.

Republican National Committee Chairman Reince Priebus called the GOP "the party of the open door," despite the aggressive language.

"We're still a party that believes that marriage is between one man and one woman, but it doesn't mean that we're going to kick people out," he said. "I can't win this race if I tell people that they're not welcome in our party."

On trade, the new platform embraces Trump's hardline approach to immigration, led by his call for a massive wall along the U.S-Mexico border.

"The border wall must cover the entirety of the southern border," reads the updated platform, which adds that "the presence of millions of unidentified individuals in this country poses grave risks to the safety and sovereignty of the United States."

Trump's team also pushed for more liberal language on trade and banking, calling for the reinstatement of the Glass-Steagall Act of 1933 that would limit the size of banks and backing off the GOP's long embrace of free trade. Trump has railed against free trade deals throughout his candidacy.

On social issues at least, Tony Perkins, the head of the socially conservative Family Research Council, called the new platform "without question" the most conservative he can remember.

He noted that the policies help guide policymaking at every level in American politics: from the White House all the way down to school boards and city councils.

"It's a useful and helpful document that does help guide and shape policy across the nation," said Perkins, who served on the committee charged with updating the platform. "It has great significance."