South Sudan's leaders are getting rich while their country burns 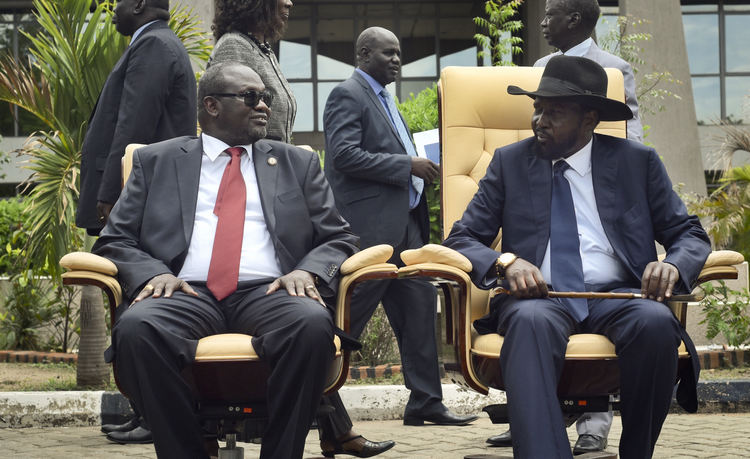 South Sudan's leaders have amassed wealth abroad amid a conflict in which tens of thousands have been killed, a U.S.-based watchdog group said Monday, charging that the civil war is being fueled by competition among rivals over national resources such as oil.

South Sudan President Salva Kiir, former deputy Riek Machar and those close to both men have looted the country in accumulating wealth that includes mansions, luxury cars and stakes in a number of businesses abroad, according to the report by The Sentry.

The report says it has obtained images of officials' family members jet-setting and partying in five-star hotels, as well as documentation of their properties abroad. Officials in South Sudan who earn modest salaries have been able to amass fortunes with help from arms dealers, bankers, lawyers and others abroad, it said.

"The key catalyst of South Sudan's civil war has been competition for the grand prize—control over state assets and the country's abundant natural resources—between rival kleptocratic networks led by President Kiir and (former) Vice President Machar," the report says.

"The leaders of South Sudan's warring parties manipulate and exploit ethnic divisions in order to drum up support for a conflict that serves the interests only of the top leaders of these two kleptocratic networks and, ultimately, the international facilitators whose services the networks utilize and on which they rely."

South Sudan, which gained independence from Sudan in 2011, plunged into conflict soon after Kiir fired Machar from his post as vice president in 2013. A peace deal reached a year ago under international pressure has been violated repeatedly by fighting, and Machar fled the country in recent weeks.

The report by The Sentry, which was co-founded by actor George Clooney, says that in 2015 it began "to follow the money that has been and continues to be amassed" by networks loyal to either Kiir or Machar.

The report says the country's leaders, including some military generals, have much of their wealth in the form of high-end properties in neighboring countries such as Uganda and Kenya. Gen. Paul Malong, the chief of military staff, owns two villas in Uganda in addition to a $2 million mansion in a gated community in Kenya's capital, Nairobi, according to the report, which cites his annual salary as roughly $45,000.

Documents show that several children of the president, including his 12-year-old son, have held stakes in a number of business ventures, the new report says.

"Machar has had far less access to rent-seeking opportunities," it says.

The report urges the international community, including South Sudan's neighbors, to crack down on banks that fail to stop dubious transactions, and impose asset freezes on those responsible for human rights violations.

1
Lay people have been passing on the Catholic faith for 2,000 years. Now Pope Francis has made it an official ministry
Gerard O’Connell
2
No one can win the Communion wars over abortion
Sam Sawyer, S.J.
3
Gloria Purvis: ‘I’m not a conservative. I’m not a liberal. I’m just Catholic.’
Gloria Purvis
4
A coroner ruled that victims of 1971 Belfast massacre—a priest and 9 lay Catholics—were ‘entirely innocent’
Michael Kelly - Catholic News Service
5
‘I’m angry about homophobia in my church’: Why this German Jesuit is going against a Vatican decree against blessing gay unions
Michael J. O’Loughlin