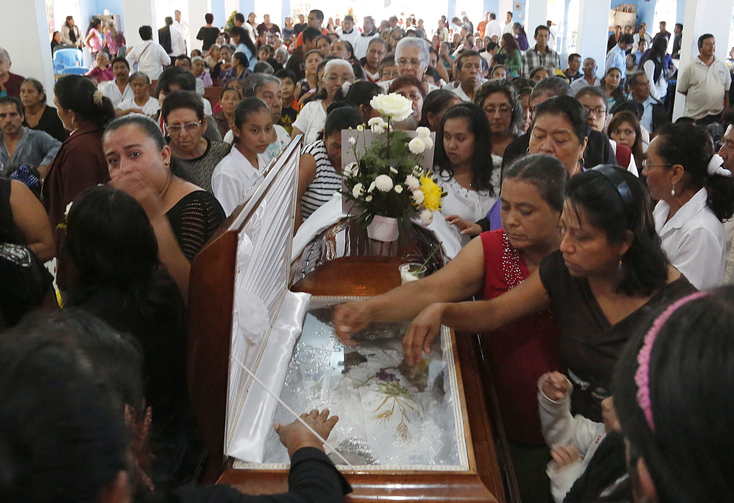 Roman Catholic Church officials pleaded on Sept. 22 for the life of a priest who was kidnapped from his parish residence one day after one of two other priests who had been abducted and killed was laid to rest in another part of Mexico.

The Archdiocese of Morelia said priest Jose Alfredo Lopez Guillen was abducted Monday from his parish residence in the rural town of Janamuato, in the western state of Michoacan. The archdiocese said he was kidnapped after he was robbed.

"We plead that the life and physical integrity of the priest be respected," the archdiocese said.

In a video statement, Cardinal Alberto Suarez Inda, head of the Morelia archdiocese, said, "After sharing the enormous pain of the death of two young priests in the diocese of Papantla, Veracruz, we are now suffering our own anguish with the disappearance of one of our priests."

Two priests were kidnapped Sunday in the Gulf coast state of Veracruz, and their bullet-ridden bodies were found on a roadside the next day.

"Our community suffers the death or anguish of any of the faithful," the cardinal said. He said the missing priest "is a good man, a man who does good, a peaceful man, and so this barbarity is in no way justified."

The two attacks on priests have raised concerns, although prosecutors in Veracruz state said the two priests kidnapped Sunday knew their attackers and had been drinking with them. Robbery was also a suspected motive in that attack.

The Catholic Media Center reports that 28 priests have been killed in Mexico since 2006, not counting this week's slayings.

The U.S. State Department wrote in its 2015 International Religious Freedom report that priests in Mexico are "victims of extortion attempts, death threats, and intimidation by organized criminal groups."

Mourners packed a church on Sept. 21 for a funeral Mass in memory of one of the murdered priests.

Parishioners filled all the standing room inside the church in the community of Paso Blanco while others outside listened through the windows, huddling under the eaves as a steady rain fell.

A large banner on the front of the church bore a photo of the young Rev. Jose Alfredo Suarez de la Cruz, who was ordained only a few years ago and arrived at his post in the city of Poza Rica just a month before he was murdered.

"You are a priest for always," the banner read.

Suarez and Rev. Alejo Nabor Jimenez were last seen Sunday in Poza Rica, and their bullet-ridden bodies were discovered the following day on a roadside miles away. One had been shot nine times.

State prosecutors say they believe the clerics knew their attackers and had been drinking with them before the get-together "turned violent."

But some parishioners are skeptical of that theory and say organized crime has plagued Poza Rica with killings and disappearances.

"Unfortunately, Poza Rica is a very severe place in [terms of] security," a priest said during the service, calling on authorities to ensure justice in the killings.

Suarez's casket was on display during the Mass. Parishioners broke open the floor of the church to construct the vault that will be his final resting place.

Pope Francis sent a letter of condolences calling the slain clerics "victims of inexcusable violence." The letter was signed by Cardinal Pietro Parolin, the Vatican secretary of state, and posted online by the Mexican Conference of Bishops.

"Yet again we confirm that violence and insecurity have taken root in our society," Bishop Jose Trinidad Zapata Ortiz of the city of Papantla, near Poza Rica, said in a statement released by the Conference. "We hope that authorities clear up the crime and that such a regrettable loss of our brothers serves for the arrival of the peace we all desire so much."