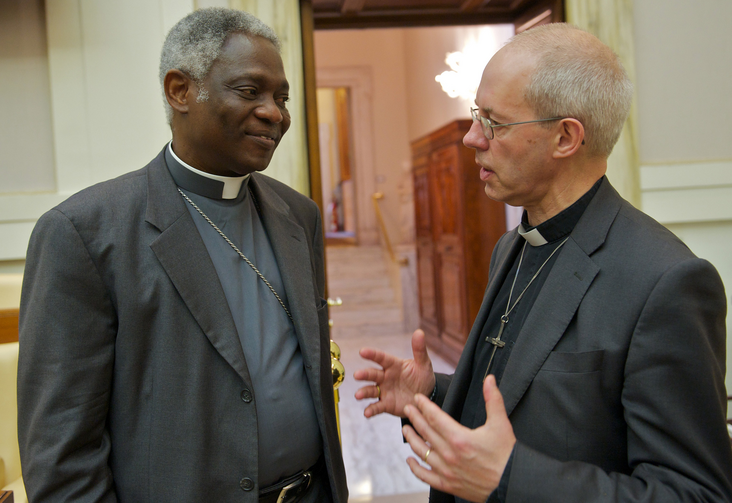 “Don’t forget the three P’s: prayer, peace and poverty,” Pope Francis, speaking in English, told the Archbishop of Canterbury, Justin Welby, as he bade him farewell after their 40 minute meeting in the Vatican on June 16. “We must walk together!” he added.

It was the second meeting in the Vatican between the leader of the 80 million member worldwide Anglican Communion and the head of the 1.2 billion Catholics across the globe. Their first encounter took place exactly one year ago in June 2013, but that was of a more informal nature during which they not only talked and prayed together, and committed themselves to combatting human trafficking, as they did this time, but they also had lunch together in the Santa Marta guesthouse in the Vatican where the Pope resides. On both occasions, they were joined in the public sessions by the President of the Pontifical Council for the Promotion of Christian Unity, Cardinal Kurt Koch, and the Archbishop of Westminster, Cardinal Vincent Nichols.

The 58-year-old Welby, who was installed as the 105th Archbishop of Canterbury on March 21, 2013, a week after Francis inaugurated his Petrine ministry, told me after this meeting with the Pope that “I was, as last year, deeply appreciative of his time and deeply appreciative of the wisdom that I had from him.” When I asked the archbishop afterwards what he was taking away from his meeting with the Pope, he reflected briefly and then said: “The one thing I go away with most clearly is how there was a chord struck about the essential things that are worth thinking about, and he listed them beautifully as ‘the three P’s’: prayer, peace and poverty.”

“We just hit a chord on that and on the way we communicate,” the archbishop said.

While the Pope, who studied English for a short time in Dublin in1980, had a translator to assist him throughout the private and public session of their encounter, sources told me that Francis actually understood the Cambridge University educated archbishop perfectly well when he spoke in English and had recourse to the Vatican monsignor-translator mainly to convey clearly what he wanted to say. The same was true in June 2013.

Archbishop Welby revealed that he and Pope Francis “spoke about the Holy Land, and what he [the Pope] had achieved there, and how for religious leaders bringing people to prayer, as I did in Nigeria with the President of that country last week, is of huge significance. It’s not about us doing political things, it’s about praying.” He confirmed that the Pope had also referred to ‘the three P’s” in English during their private conversation and spontaneously raised this again in their public session when the two cardinals and others were present. “He broke off from the Italian in which he was speaking, and said, ‘Remember the 3 P’s: prayer, peace and poverty,’ ” Welby said.

In his public address of welcome, Pope Francis described the archbishop and himself as “co-workers in the Lord’s vineyard and fellow pilgrims on the path to his Kingdom” and prayed that their meeting “will serve to strengthen further our bonds of friendship and our commitment to the great cause of reconciliation and communion between Christian believers.”

Speaking frankly about the centuries old division between Catholics and Anglicans, Pope Francis said, “We cannot claim that our division is anything less than a scandal and an obstacle to our proclaiming the Gospel of salvation to the world.” Indeed, he said, “our vision is often blurred by the cumulative burden of our divisions and our will is not always free of that human ambition which can accompany even our desire to preach the Gospel as the Lord commanded.”

Then striking a note of hope, he declared that while “the goal of full unity may seem distant indeed, it remains the aim which should direct our every step along the way.”

Drawing on the Second Vatican Council’s Decree on Ecumenism, the pope told the primate of the Church of England, in words also meant for the worldwide Anglican Communion, that “we should advance in our relationship and cooperation by placing no obstacle to the ways of divine providence and by not prejudicing future promptings of the Holy Spirit.”

Pope Francis recalled that “progress towards full communion will not be the fruit of human actions alone, but a free gift of God.” But, well aware that many Catholics and Anglicans are deeply discouraged by the growing divisions between them—“matters of deep significance that separate us” was how Welby put it—resulting from decisions in the United States, Australia and New Zealand, and most recently in the Church of England (expected to be confirmed by the General Synod next month), to proceed with the ordination of women bishops, the pope reminded everyone that “the Holy Spirit gives us the strength not to grow disheartened and he invites us to trust fully in the power of his works.”

In his talk, the Jesuit pope, recalled that the previous Sunday evening, June 15, the Archbishop of Canterbury had presided at Vespers in the Church of San Gregorio al Celio, from which Pope Gregory the Great sent forth Augustine and his monastic companions to evangelize the peoples of England, “thus inaugurating a history of faith and holiness which in turn enriched many other European peoples.”

“This glorious history has profoundly shaped institutions and ecclesial traditions which we share and which serve as a solid basis for our fraternal relations,” the pope said, and “on this basis, then, let us look with confidence to the future.” In that future, he added, the Anglican-Roman Catholic International Commission and the International Anglican-Roman Catholic Commission for Unity and Mission are “significant forums for examining, in a constructive spirit, older and newer challenges to our ecumenical engagement.”

In the final part of his address, Pope Francis rejoiced that he and Welby had “discussed our shared concerns and our pain” in the face of “a number of grave evils afflicting our human family” and in particular “the scourge of human trafficking and forms of modern-day slavery.”

He praised the Anglican archbishop for the “leadership” he is giving in combatting “these intolerable crimes against human dignity,” and he welcomed the “notable collaborative efforts” in this field “on the ecumenical level and in cooperation with civil authorities and international organizations,” as well as “the action network against the trafficking in women set up by a number of women’s religious institutes.”

Editor's Note: As Associate Editor and Vatican Correspondent for America, Gerard O’Connell will be based in Rome and will be responsible for planning and producing America’s coverage of the papacy, Vatican affairs and Rome events. Beginning on August 1, 2014, he will write a weekly column in the print edition of America called “Vatican Dispatch” and will file reports regularly via America’s other digital platforms.