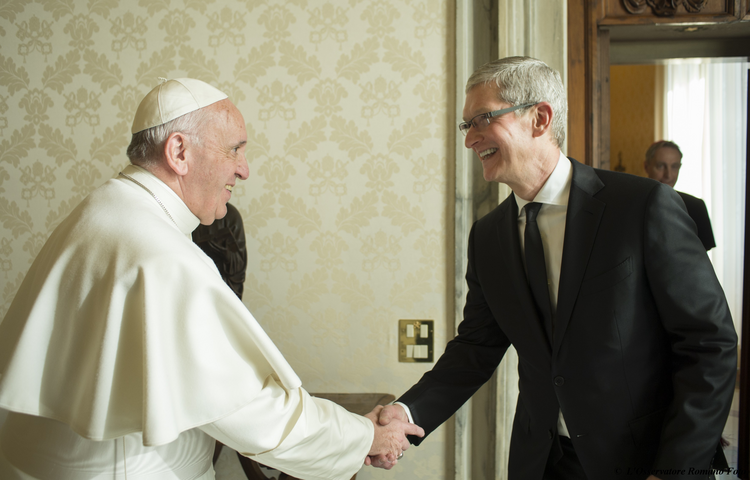 The pontiff spent around 15 minutes in a private conversation with Cook on Jan. 22. Francis regularly meets with dignitaries at the Vatican, but the arrival of the Apple chief raised eyebrows particularly for its timing. Just a week earlier the pope had met with Schmidt, currently executive chairman of Alphabet Inc., parent company of Google, where he served as CEO for a decade.

Francis has confessed to being a “dinosaur” when it comes to technology, shunning the Internet and television as well. But the pope is well aware of the importance of technology in mobilizing Catholic youth, one key area of his papacy, and once called the Internet a “gift from God.”

Marking the World Day of Social Communications on Friday, Francis said it was up to individuals to decide whether they choose to harness the Internet for good or bad.

“The digital world is a public square, a meeting-place where we can either encourage or demean one another, engage in a meaningful discussion or unfair attacks,” he said. “The internet can be used wisely to build a society which is healthy and open to sharing.”

In the pope’s meetings with Cook and Schmidt, he may have found common ground aside from technology. The Apple CEO pledged last year to donate his fortune to charity, while the Alphabet chairman has a family foundation dedicated to the sustainable use of energy—an area close to Francis’ heart.

Ahead of Cook’s arrival at the Vatican, Apple on Thursday announced a new app development center in Italy. The tech hub will be located in Naples, southern Italy, which has suffered from organized crime and was visited by Francis in March 2015.

But Cook’s visit to the Vatican could prove controversial among conservative Catholics, as in 2014 he became the first head of a Fortune 500 company to come out as gay. The Catholic Church continues to hold a negative view of same-sex relationships, deeming them “intrinsically disordered,” although Francis is viewed as having a more welcoming stance than his predecessors.