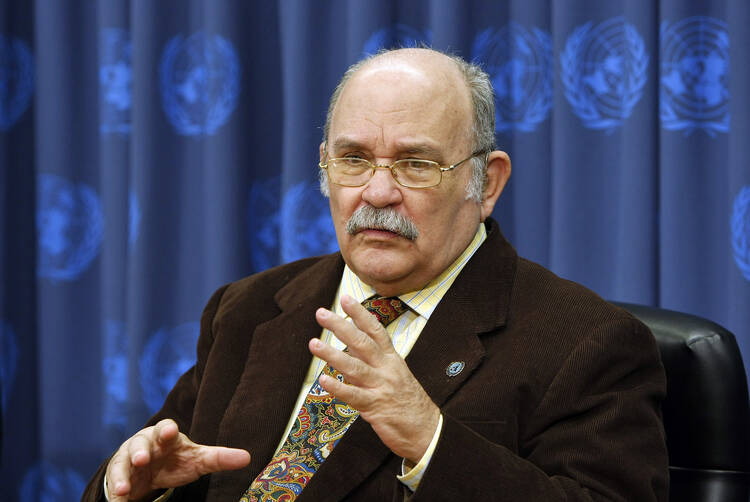 Continuing a bid to revive a movement that was sidelined by his predecessors, Pope Francis has reinstated a Central American priest who was suspended by the Vatican in the 1980s for his involvement in the political activities of Nicaragua’s leftist Sandinista movement.

The Rev. Miguel D’Escoto Brockman, 81, was suspended from his duties by St. John Paul II and recently wrote to Francis asking for that order to be revoked so he could celebrate Mass again before he died.

D’Escoto and three other dissident priests were suspended in 1985 for defying a church ban on clergy holding government jobs. The Sandinistas, who supported the “popular church” of liberation theology, overthrew the pro-American regime of Anastasio Somoza in 1979. D’Escoto served as Nicaragua’s foreign minister from 1979 to 1990.

The Vatican announced on Aug. 4 that Francis had agreed to the priest’s request to lift the 29-year suspension and asked D’Escoto’s superior in the Maryknoll order to help reintroduce him to priestly ministry.

Maryknoll Fathers and Brothers confirmed in a statement that the pope had agreed to remove “the canonical censure inflicted upon him,” and approved his reintegration and resumption of his priestly duties.

The move is likely to provoke fresh debate about Francis’ own political stance since he has been criticized by conservative American commentators for having a “Marxist” political perspective on international finance and capitalism.

The sanction was also a reflection of John Paul’s broader crackdown on liberation theology in Latin America.

“During the 1970s, Father d’Escoto became engaged in politics in Nicaragua,” the Maryknoll statement said. “He joined the Sandinista National Liberation Front, a political party that overthrew Anastasio Somoza Debayle and established a revolutionary government.

“For his political actions, involvement in the Sandinista government and failing to resign from a political office held in violation of his ministry, Father d’Escoto was suspended from his priestly duties by the Vatican.”

D’Escoto was ordained a Roman Catholic priest in 1961. He helped found Orbis Books, the theological publication division of Maryknoll, and he was an official with the World Council of Churches. From September 2008 through September 2009, he presided over the 63rd session of the U.N. General Assembly as its president.

Josephine McKenna - Religion News Service
Show Comments (
8
)
Comments are automatically closed two weeks after an article's initial publication. See our comments policy for more.
Bill Mazzella
8 years 4 months ago
Lot of chickens coming home to roost.The difference between JPII, Benedict, compared to Francis is that Francis learned how the liberation theology movement is really according to the gospel. Francis thought like them as a young person, although he was always concerned about the poor. But Francis learned and now he is a shepherd who has learned that the essential mission of Jesus is to free the captives. There are many privileged clerics who are fiercely clinging to the old Empire of domination and privilege. We must pray that Francis prevails in bringing the gospel to the church and having it preached.
Vincent Gaitley
8 years 4 months ago
Captives? I thought He came for the sinners.
Tim O'Leary
8 years 4 months ago
Maybe, Bill means captives of sin. Perfect freedom is freedom from sin.
ed gleason
8 years 4 months ago
Maybe Vincent & Tim can explain to the Central American children at the border that they are mistaken about the dangers and governance in their Banana republics .. and that JPII would have them stay in place and endure.
Tim O'Leary
8 years 4 months ago
Ed - You may think drug cartels are somehow practicing a form of liberation theology but you may not have seen this report of the hundreds of bodies of illegal immigrants reported by the British media. Death has always been the consequence of Marxist ideology - http://www.dailymail.co.uk/news/article-2712187/EXCLUSIVE-A-lot-people-die-blood-Obamas-hands-Shocking-images-corpses-illegal-immigrants-left-die-border-crossings.html For Christian motivations, I am a strong proponent of immigration into the USA (but even if only for our own sakes - we need to replace the millions of children missing as a consequence of our nation's selfish contracepting culture).
Vincent Gaitley
8 years 4 months ago
Yes, I can explain. But I wouldn't argue politics with a child. However, for you…Remember that the governments in Central America are all run by folks ostensibly Catholic, and certainly in the heritage of the Church there. And by your own naming them "Banana republics", you admit they failed. Name one nation on earth that has a Catholic heritage and style of government that is a roaring economy, a stable democratic government, etc. Our Church has much to answer for, especially the legacy of failed economics in Latin America.
Vincent Gaitley
8 years 4 months ago
Just what we need, another priest set loose upon us who doesn't know a thing about economics, business, money, and earning a living. Forgive him surely, but please don't give him a microphone. We've heard it before.
Tim O'Leary
8 years 4 months ago
This is an act of mercy to permit the 81-year old priest to say Mass again for his remaining years. It of course in no way endorses liberation theology to reconcile with someone who requests it. Like the father in the Prodigal Son, the Church should have open and welcome arms for anyone who wishes such reconciliation.