Pope Francis: ‘A Crime Against Humanity’ 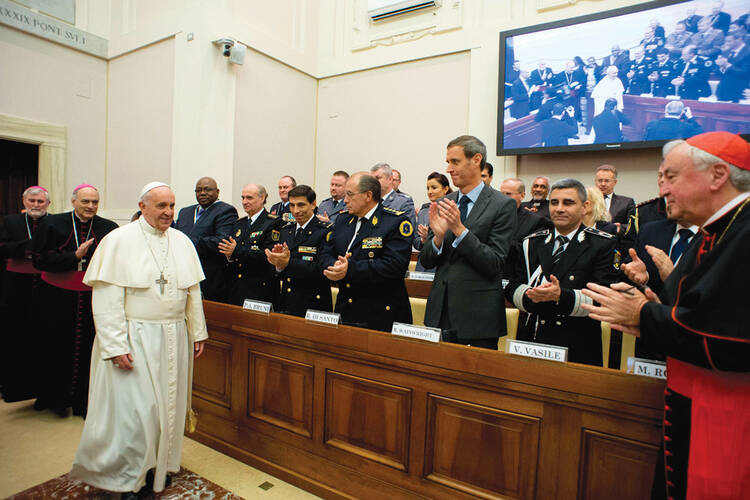 When the pope was Cardinal Jorge Mario Bergoglio of Buenos Aires, he dragged the hidden problem of human slavery into broad daylight, annually celebrating open-air Masses in the city’s Constitution Square for and with victims of human trafficking. Now, as leader of the universal church, Pope Francis is dragging the blight of human trafficking onto the global stage, decrying the world’s indifference.

The Vatican recently sponsored a conference of church workers, charity representatives and police chiefs from 20 nations, Interpol and Europol, who pledged greater cooperation to prevent trafficking. “Human trafficking is an open wound on the body of contemporary society, a scourge upon the body of Christ,” Pope Francis said, addressing the gathering on April 10. “It is a crime against humanity.”

The United Nations estimates that 2.4 million people are trafficked at any given time. Their exploitation generates $32 billion in annual profits for criminals. The Global Slavery Index estimates nearly 30 million people worldwide are living in slave-like conditions.

Pope Francis has made combating human trafficking and slavery a priority of his papacy. The Vatican recently joined forces with the Anglican Church and Al-Azhar University, the world’s foremost seat of Sunni learning, in an anti-slavery initiative. Not long after his election in March 2013, he asked the chancellor of the pontifical academies of sciences and of the social sciences to work on the problem of human trafficking and modern-day slavery.

Just a few months later, Bishop Marcelo Sánchez Sorondo, the Buenos Aires-born chancellor of the Pontifical Academy of Science, hosted the first of three international gatherings on trafficking and the marginalized. He said the pope’s focus on the issue is driven by a deep desire to be close to those who suffer, recognizing that Christ himself can be found in their wounds.

“He really has always had this ‘nose for’ the people of the Beatitudes,” those who are poor in spirit, the meek, the persecuted and so on, he said. “This is his instinct.”

Bishop Sánchez said the pope’s arguments to end slave labor appeal not only to people of faith, but also to people who believe only in the bottom line. In a speech to new ambassadors to the Vatican last December, the pope said that “the increasingly aggressive crime” of trafficking and slave labor “threatens not only individuals, but the basic values of society and of international security and justice, to say nothing of the economy, and the fabric of the family and our coexistence.”

Bishop Sánchez said economists who support the pope’s position argue that living wages for workers pump money back into the economy, stimulating business and increasing government revenues through taxes. But the pope knows that ultimately converting hearts and minds is what will determine whether Catholics, economists, businesses, police and politicians take action.

“Humanity still hasn’t learned how to cry, how to lament. We need many tears in order to understand the dimension of this drama,” the pope said at the conclusion of the trafficking conference.