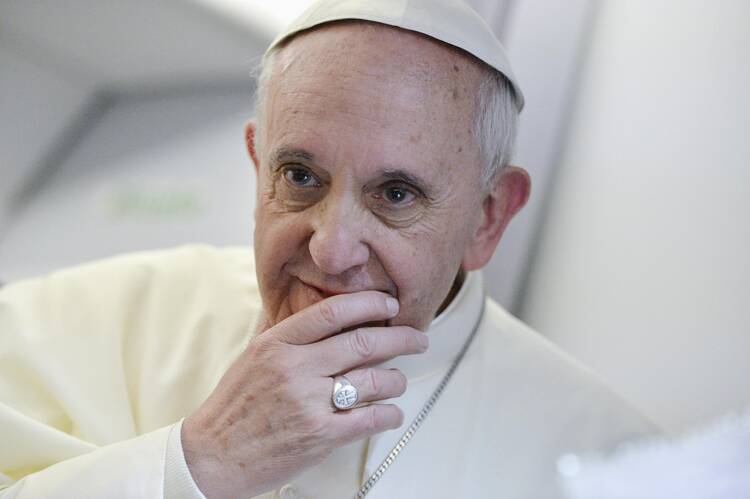 ABOARD THE PAPAL FLIGHT FROM BRAZIL (CNS) -- From his personal prayer life and spirituality to the role of women in the church and the pastoral care of the divorced, Pope Francis responded to several questions about church teaching and ministry July 28 when he met reporters on his flight from Rio de Janeiro to Rome.

On the possibility of the Catholic Church ordaining women priests, Pope Francis said, "the church has spoken and said, 'no,'" and the form in which Blessed John Paul II declared that was "a definitive formula." Blessed John Paul said that because Jesus chose only men as his disciples, the church was not able to ordain women.

However, Pope Francis said, the Catholic Church still has far to go in developing a real theology that explains the importance of women in the church and how it would be impossible for the church to live up to its role as mother and bride without the contribution of women.

Asked about any possibility that the Catholic Church would begin to allow Catholics who have been divorced and remarried only civilly to receive the sacraments, Pope Francis said he wanted to make it clear that divorced Catholics can receive the sacraments. The problems begin when they marry a second time without having their first union annulled.

He said the annulment process needs to be reformed and streamlined, but even more importantly the Catholic Church needs to get serious about developing a comprehensive pastoral program for the family, and that was one topic he planned to discuss Oct. 1-3 with the commission of eight cardinals he named to advise him on the reform of the Roman Curia and other important matters.

The late Cardinal Antonio Quarracino, his predecessor as archbishop of Buenos Aires, used to say that he thought half the Catholic marriages in the world could be annulled because people marry "without maturity, without understanding it was for one's entire life or because it seemed socially necessary," the pope said.

Pope Francis also mentioned the practice of the Orthodox churches that allow a second marriage -- what he called "a second chance" -- in some cases, giving the impression that the Catholic practice could undergo modification.

Asked about why he speaks so frequently about God's mercy, he said, "I think this is a time for mercy," particularly a time when the church must go out of its way to be merciful given the "not-so-beautiful witness of some priests" and "the problem of clericalism, for example, which have left so many wounds, so many wounded. The church, which is mother, must go and heal those wounds."

"If the Lord never tires of forgiving us, we have no other choice but to do the same," he said. Pope Francis told the reporters that in the Gospel story of the Prodigal Son, when the young man returned after squandering his inheritance, "his father didn't sit him down and say, 'How did you spend the money?' but he threw a party."

And, the pope said, the father "didn't just wait for his son, he went out to look for him."

A Brazilian journalist asked Pope Francis why he did not speak out during his trip against proposals to liberalize Brazil's abortion laws and to legalize gay marriage.

"The church already has spoken on these issues," he said. "Young people understand perfectly what the church's point of view is."

A Portuguese reporter told the pope it seemed a bit odd to hear a pope repeatedly asking people to pray for him.

"When I was a priest, I asked people to pray for me, but not as often," he said. "I started asking with some frequency when I began the work of a bishop because I believe we need the Lord's assistance in this work to help the people of God move forward."

In addition, the pope said, "I truly feel I have many limits, even sins" and so is in need of prayer.

Pope Francis said he still considers himself a Jesuit, but first he posed a tricky logic problem: "The Jesuits make a special vow of fidelity to the pope. But if the pope is a Jesuit, does he have to make a vow to the superior of the Jesuits?"

"I am a Jesuit in my spirituality, a spirituality involving the Exercises (of St. Ignatius)," he said. "And I think like a Jesuit," he said, but smiled and quickly added, "but not in the sense of hypocrisy."

As for his decision to continue living at the Domus Sanctae Marthae, the Vatican guesthouse, he insisted it was a matter of liking to have a lot of people around and not a statement about simplicity or austerity, although he said both are essential for every minister in the church.

"I couldn't live alone or with just a few people," he said. The papal apartment in the Apostolic Palace "isn't luxurious -- it's large, it's big, but not luxurious." He said he was telling the whole truth when he met students from Jesuit schools and told them his housing choice was a "psychological necessity."

He said people were mistaken if they thought the cardinals who work in the Curia live a life of luxury.

"They don't live like rich men, they live in little apartments," he said.

Looking ahead, Pope Francis said he was looking forward to canonizing Blesseds John XXIII and John Paul II, but choosing a date has become tricky.

First, he said, he thought the Dec. 8 feast of the Immaculate Conception would be appropriate, but that would make it difficult for poorer Polish pilgrims who would have to travel winter roads by bus. The late-November feast of Christ the King -- which also is the end of the Year of Faith -- is a possibility, he said, but it is probably not enough time to prepare. The best guess, he said, is Divine Mercy Sunday, April 27, the Sunday after Easter in 2014.

Pope Francis also responded to a question about his relationship with retired Pope Benedict. Pope Francis smiled warmly and spoke with admiration of the retired pope's humility, intelligence and prayerfulness.

The unusual situation of having a pope and a retired pope both living at the Vatican is working out very well, although he said he has tried to encourage Pope Benedict to feel freer to invite people over, to go in and out and to join him for events.

Having the retired pope nearby to consult with or ask questions of, he said, "is like having a grandfather at home -- a very wise grandfather."

Catholic News Service
Show Comments (
3
)
Comments are automatically closed two weeks after an article's initial publication. See our comments policy for more.
Frank Bergen
8 years 3 months ago
Pardon my irreverence but it is just plain silly and hardly a theological argument to say that Jesus' choice of the twelve makes is impossible two millennia later for the church to ordain women as deacons, priests or bishops. It is likewise something approaching the absurd to cling to Jesus' words regarding divorce as though marriage hadn't changed over the millennia from his day, when prohibiting divorce was protective of women who were at the mercy of their husbands in the marital relationships of the time.
Beth Cioffoletti
8 years 2 months ago
(I didn't want my reply to be here and I don't seem to be able to delete it)
Beth Cioffoletti
8 years 2 months ago
I am so looking forward to the "real" theology that explains the importance of women in the Church. I've always felt that this business of making girls altar servers and even the push for the ordination of women was somehow missing the mark. Could the role of women actually surpass that of priests? This is what Francis seems to be saying, and if that were truly understood and embraced could have profound effects on how women are known and treated throughout the world. This is radical. Women being shown special favor by God in the grand scheme of things just might mean the end sex slaves, no more genital mutilations, no more rape and abuse. Such crimes would be seen as the sacrilege that they are.