Pope Calls for Ethics Reforms, End to 'Cult of Money' 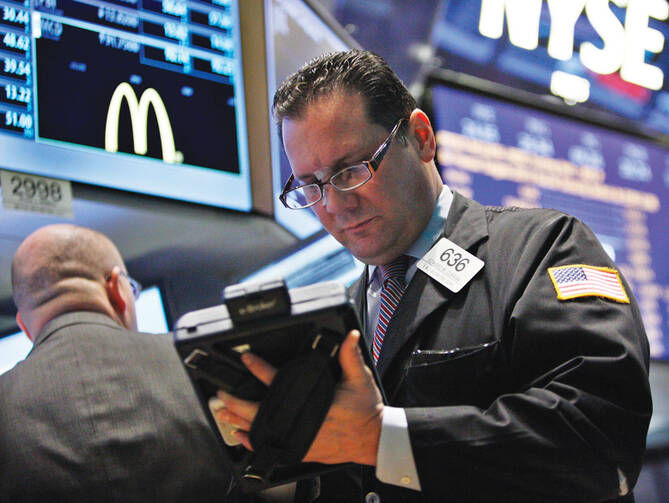 In his strongest remarks yet concerning the world’s economic and financial crises, the pope said, “Money has to serve, not to rule.

“We have created new idols,” Pope Francis told a group of diplomats gathered at the Vatican on May 16, and the “golden calf of old has found a new and heartless image in the cult of money and the dictatorship of an economy which is faceless and lacking any truly humane goal.” According to Pope Francis, a major reason behind the increase in social and economic woes worldwide “is in our relationship with money and our acceptance of its power over ourselves and our society.” He called for global financial reform that respects human dignity, helps the poor, promotes the common good and allows states to regulate markets.

The Vatican spokesman, Federico Lombardi, S.J., told journalists it was the pope’s “first forceful speech on the economic and financial crisis,” social justice and the attention needed to the world’s poor. Father Lombardi described the speech as “in continuity with his previous talks on these subjects” as Cardinal Jorge Mario Bergoglio of Buenos Aires, Argentina. “But as pope it is his first powerful and explicit speech,” touching on such themes in-depth, he said. The pope made his remarks during a speech welcoming four new ambassadors as they presented their credentials to the Vatican.

The pope highlighted the root causes of today’s economic and social troubles, pointing to policies and actions that stem from a “gravely deficient human perspective, which reduces man to one of his needs alone, namely, consumption.

“We have begun this culture of disposal,” he said, where “human beings themselves are nowadays considered as consumer goods which can be used and thrown away.”

The wealth of a minority “is increasing exponentially,” while the income of the majority “is crumbling,” he said. This economic inequality is caused by “ideologies which uphold the absolute autonomy of markets and financial speculation and thus deny the right of control to states, which are themselves charged with providing for the common good.”

The lack of adequate economic regulation or oversight means “a new, invisible and at times virtual, tyranny is established, one which unilaterally and irremediably imposes its own laws and rules,” Pope Francis said. Ethical principles and policies of solidarity are “often considered counterproductive, opposed to the logic of finance and economy” and “ethics, like solidarity, is a nuisance,” and so they are rejected along with God. “These financiers, economists and politicians consider God to be unmanageable, even dangerous,” he added, “because he calls human beings to their full realization and to independence from any kind of slavery.”

Pope Francis called on the world’s political and financial leaders to consider the words of St. John Chrysostom: “Not to share one’s goods with the poor is to rob them and to deprive them of life. It is not our goods that we possess, but theirs.”

The pope said he “loves everyone, rich and poor alike,” but that as pope he “has the duty, in Christ’s name, to remind the rich to help the poor, to respect them, to promote them.” Why shouldn’t world leaders “turn to God to draw inspiration,” the pope asked. Looking to God and “his designs,” he said, would help create “a new political and economic mindset” that would bring economics and social concerns back together in a healthy and harmonious relationship.

From AP, CNS, RNS, Staff and other sources
Show Comments (
5
)
Comments are automatically closed two weeks after an article's initial publication. See our comments policy for more.
Lucie Johnson
8 years 6 months ago
In a sense, this position is not new, but it is stated more directly than usual. The words of John Chrysostom are strong medicine. One gets the sense that what Pope Francis says stems from a deep conviction that orients his own life. That is encouraging as well as challenging. Maybe we --as a church and as individuals-- will find the courage to live this more.
Michael Barberi
8 years 6 months ago
There is no question that the wealth of the minority is increasing exponentially while the income of the majority is crumbling. This varies by country. Clearly, Pope Francis is right that the rich, inclusive of governments, must do more to help the poor. World leaders need to reform their economies to be more just with respect to the poor and redistribute income appropriately. However, without examples of countries where this nobel and righteous ideology works, or specific proposals for specific countries that will also balance the many factors and consequences of such a decision will result in 'wise words that are lost in the wind'. Consider China, the Middle East and African countries as well as the U.S. If we begin by changing the hearts of individuals, inclusive of world leaders, and ask them to turn to God for inspiration, then we face the fact that most world leaders are not Christian or Catholic. Even natural and universal laws of human kindness and justice, while acceptable to most people, result in different interpretations of what constitutes sound and fair economic policies. Consider the complex series of questions in creating a fairer U.S. tax code and more money for the poor. How much should the rich pay in total taxes? How do we define "the rich"? Is paying 50% of their income to the government fair? Should everyone pay a minimum level of taxes (e.g., almost 50% of US individuals pay no taxes)? How much should corporations pay? These questions are not posited to be arrogant. They point to a complex series of decisions with far reaching consequences. Looking to God and his designs will help, but they will not result in concrete solutions as if God will provide them in a dream or something that will suddenly emerge in the minds of leaders. Reform will take time. Consider that the debate over simplifying the U.S. tax code has been going for decades. Should we do more? Of course, we should and we must. However, even in the U.S., the political positions of Presidents and Congress require compromise for the greater good. We have seen very little of this recently. Eventually, reform will happen, but it will likely not look like what Pope Francis has in mind. I hope I am wrong.
Fernando Diaz del Castillo Z.
8 years 6 months ago
This is the chalenge of christians: to build the new "city", that is the new country, the new world of justice and love. That this is impossible? Well, this is our challenge, and it takes a change of mind, to change the love and worship for money, to change greed for love. It will take a long time, no doubt, but I think this is our call to follow Christ. Catholics who have the call to politics may not forget their vocation as Cristians.
THEODORE DELANEY
8 years 6 months ago
At last!
Michael Bradley
6 years 2 months ago
I so welcome the leader of the Catholic Church, Pope Francis, and his message that resonates with all men and women of good will. The crass materialism that is celebrated in the United States and much of the world ruled by multinational corporations and billionaires that seeks to disconnect politics from ethics poses a great threat to the worlds survival. . A society that pretends that selfishness and greed are not moral short comings misses the central moral and spiritual message of Jesus Christ. The Hypocritical defenders of unbridled Free Market Capitalism who feel threatened by Pope Francis' message are fearful because they feel guilty. They feel guilty because they are. The living example of service, humility, and compassion demonstrated by Pope Francis is powerful and persuasive because it speaks to the heart and soul of all men and women who believe in goodness and truth.