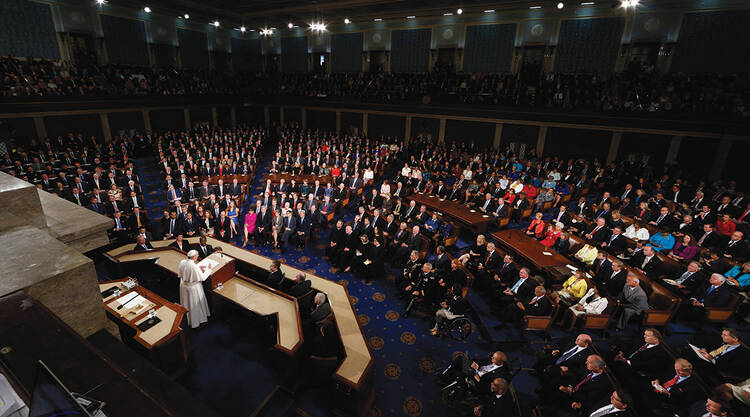 Francis, the first pope ever to address the United States Congress, provoked sustained applause by his very first words, expressing his gratitude for the invitation to address this joint session of Congress in “the land of the free and the home of the brave.”

Many veteran politicians, including Speaker of the House John Boehner, were moved to tears as they strained to hear the pope speaking softly in English even as he touched on a number of potentially incendiary issues in the U.S. Congress, from immigration to the death penalty and a consistent defense of life. The Golden Rule, he told Congress, requires us to respond generously to global neighbors migrating from the south and “also reminds us of our responsibility to protect and defend human life at every stage of its development.”

He told Congress on Sept. 24, “The world is facing a refugee crisis of a magnitude not seen since the Second World War” and called for a response that is “always humane, just and fraternal.”

His mention of the care of creation, care of migrants and care of the family in American life, threatened, he worried, by forces “from within and without,” drew sustained applause from Congress members. A call to end the arms trade, which he suggested produced profit “drenched in blood,” drew a more subdued response. (The United States is the world leader in arms exports.) The pope included among his concerns for life a call to end the death penalty.

“We, the people of this continent,” he told Congress, “are not fearful of foreigners, because most of us were once foreigners.”

Pope Francis stressed the importance of dialogue in resolving international disputes (a reference to Iran and Cuba), his endorsement of the need to respond to the crisis of climate change and the promotion of a more merciful response to global migrants.

Pope Francis knew that his address represented a unique opportunity to raise issues that are of fundamental importance and to influence the most powerful and richest nation on earth, and he did not waste it. He spoke in a fraternal way to the lawmakers—31 percent of whom are Catholic—about the need to be especially attentive to “fundamentalism, whether religious or of any other kind.” He said it is necessary to guard against “the simple reductionism which sees only good and evil…the righteous and sinners” and to “confront every form of polarization which would divide” the world “into these two camps.”

He affirmed that “if politics must truly be at the service of the human person, it follows that it cannot be a slave to the economy and finance.”