Why do people vote in churches and synagogues but not mosques? 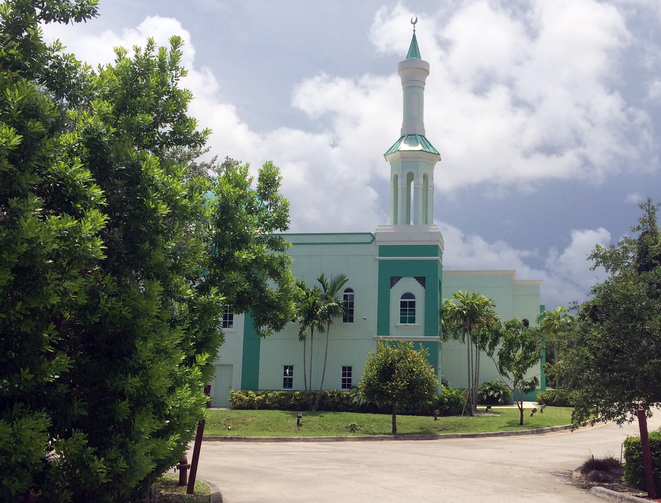 Palm Beach County voters have been assigned to polling stations in about 80 Christian churches and five synagogues or Jewish centers this year, along with schools, government buildings and other locations. Until last week, a single mosque was part of this mix.

County Elections Supervisor Susan Bucher had invited the Islamic Center of Boca Raton to host a polling site for the Aug. 30 Florida primary and Nov. 8 general elections. Then she disinvited the mosque after an anti-Islamic backlash.

She told the center's president that she received about 50 complaints, including threats of violence, from people who don't want to vote in a mosque, according to the Council on American-Islamic Relations-Florida.

But moving the polling station to a nearby library hasn't saved Bucher from criticism.

U.S. Reps. Ted Deutch and Lois Frankel, both Palm Beach Democrats, issued statements Tuesday night opposing religious discrimination. "If we are going to use places of worship as polling places, we should not discriminate," Deutch said.

"People of religion need to understand that we all have a common enemy -- those who do violent acts in the name of religion," said Omar Saleh, a CAIR-Florida attorney. "As much as I hate to say it, by removing the polling place you let the terrorists win. They want to instill fear and this is one way to do it."

The Islamic Center actively participates in interfaith efforts in its community, and should be allowed to host voting, just like almost 100 other houses of worship in the county and several mosques across the nation, Saleh said.

By caving in to threats, Saleh said Bucher is giving unwarranted support to those who say Muslims are not legitimate Americans because of violent extremists such as the gunman who killed 49 people at an Orlando nightclub last month.

Bucher, a Democrat and former state legislator now running for a third four-year term as elections supervisor, did not respond to several calls and emails from The Associated Press seeking comment, nor has she answered an AP public records request seeking the emails she received.

Her original decision to hold voting at the mosque received sharp criticism on anti-Islamic websites and from Jose Lambiet, who runs the popular GossipExtra website in South Florida, which has one of the nation's largest Jewish populations.

Lambiet accused former leaders of the Boca Raton mosque of having ties to the Islamic militant group Hamas and anti-Israel protests, and noted that the U.S. government once sanctioned the mosque's current president, Bassem Alhalabi, because he shipped to his brother in Syria a thermal imaging device, which can be used in warfare to detect people at night. Alhalabi, a Florida Atlantic University computer science and engineering professor, said his brother wanted the device to find gold.

"That is an overwhelmingly Jewish neighborhood and forcing local Jews to vote at a mosque is not the smartest thing," Lambiet said. He added that he "feels sorry" for Alhalabi and the other mosque leaders because they were approached by Bucher and just wanted to be good neighbors.

CAIR-Florida spokesman Wilfredo Ruiz said such critics are part of the "Islamophobia industry" that profits by stigmatizing Muslims. Calls to the mosque were not returned.

Nationally, there are no statistics on the number of houses of worship that host polling places. Churches and synagogues are often chosen for their large auditoriums and parking lots, which aren't usually used on Tuesdays.

An AP search found mosques in California, Iowa, Pennsylvania and Ohio that serve as polling places, one of them since at least 2004. But Ruiz said he is unaware of any Florida mosques that host voting.

The First Amendment bans government endorsements of religion, but some courts have approved of placing polling stations at houses of worship. U.S. District Judge Donald Middlebrooks, in a 2007 Palm Beach County case, rejected a lawsuit by a Jewish photographer who argued that having to vote in a Catholic church violated his rights.

Middlebrooks said the government's intent wasn't to advance religion, but to hold an efficient election.

The national Freedom From Religion Foundation disagrees with such rulings, saying houses of worship should not host polling sites, which can be intimidating to those who don't share such beliefs. But if churches and synagogues are allowed to host polling, so should mosques, said Annie Laurie Gaylor, the group's co-president.

"Christians who are offended about voting at a mosque now know how it feels for an atheist or agnostic who is forced to vote at a Catholic church or a mega church," she said.

Saleh, for one, says his polling station is at a church, and he votes there gladly.

"It is an honor to do it among my neighbors, no matter what their religion is. If that is at a church or a synagogue, it is a great way to come together discuss our differences," Saleh said. "I was born a Muslim and born an American and I am proud of both."