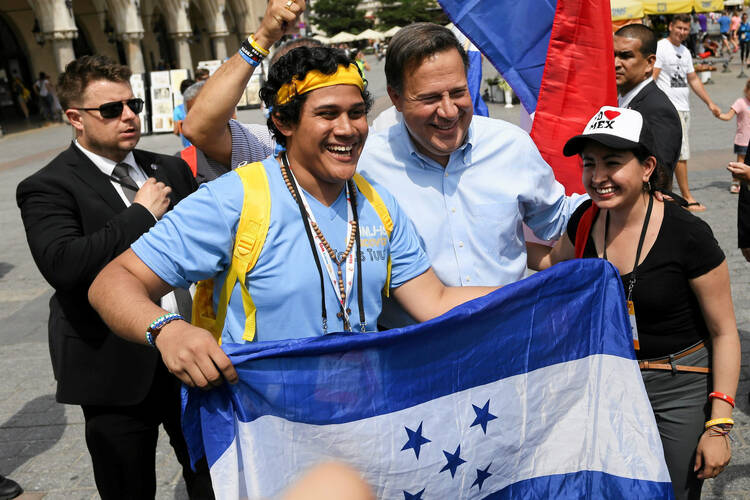 Panama, which will host World Youth Day in 2019, is a small country, but the head of its bishops' conference has no doubts the church will be able to organize the event.

"Panama, with its canal, is a bridge between two continents, and we'll also make it a symbolic bridge between young people, especially in Latin America," said Cardinal Jose Lacunza Maestrojuan of David, Panama.

At a news conference in Krakow on July 31, the cardinal said Panama was well-placed for air, road and sea communications with North and South America and would give the World Youth Day a distinctive character.

"We truly hope this will be a blessing for our country, placing it at the center of the whole world's attention," Cardinal Lacunza said.

Bishop Manuel Ochogavia Barahona of Colon-Kuna Yala said Panama was "a multicultural country, incorporating all the world's races," and would make World Youth Day a "fiesta Latina," adding that plans would include "a lot of sun and salsa."

Archbishop Jose Domingo Ulloa Mendieta of Panama told journalists Pope Francis had "once again surprised us" by choosing Central America as a venue, adding that World Youth Day would be an opportunity to "promote the region's youth."

"Panama's youngsters are suffering from mass emigration, unemployment, violence and [human] trafficking—so this will be a great stimulus for us to start again," the archbishop said. "It'll also be important for following the pope's call to bring the faith to the peripheries. Panama is one of those peripheries, and the World Youth Day will achieve this end."

In a July 31 statement, he said he was happy Pope Francis had recognized that Panama's values of "peace, dialogue and coexistence" were similar to those of World Youth Day, adding that his government would back the Catholic Church in facilitating "an event which includes every part of society."

Catholics traditionally make up three-quarters of the 3.3 million inhabitants of Panama.