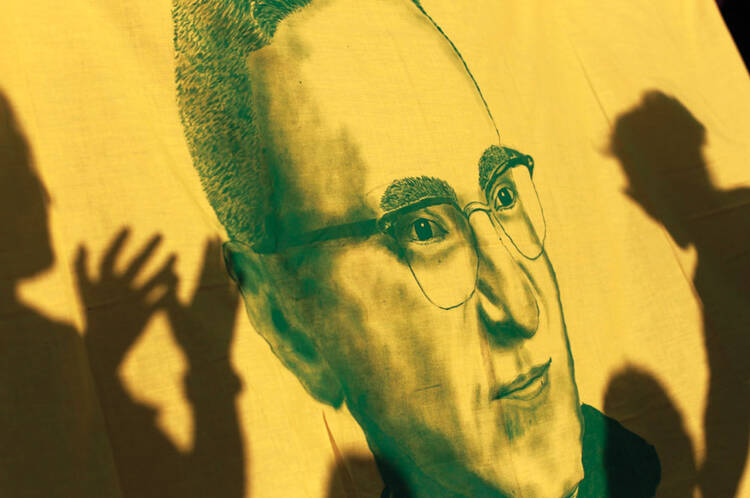 Archbishop Vincenzo Paglia, president of the Pontifical Council for the Family and the official promoter of the cause for canonization of the late Archbishop Oscar Romero of San Salvador, said the process to beatify and eventually canonize the slain Salvadoran archbishop has been “unblocked.” Archbishop Paglia, who has been the postulator of Archbishop Romero’s cause for years, made the announcement in a homily on April 20, just a few hours after meeting with Pope Francis.

The archbishop gave no more details, and his office said on April 22 that no more would be said until there is something “concrete” to report. In his homily Archbishop Paglia said, “Martyrs help us live, help us understand there is more joy in giving than in receiving. This is why we need to preserve their memories.”

The election of Pope Francis, a South American and previously the cardinal archbishop of Buenos Aires, had given new hope to supporters of Romero’s sainthood.

“We are in the best of circumstances. The time is ripe for a final verdict,” Auxiliary Bishop Gregorio Rosa Chávez of San Salvador said a few days after the pope’s election.

Msgr. Jesus Delgado, now vicar general of the Archdiocese of San Salvador, recalled a conversation in 2007 with Pope Francis, then Cardinal Jorge Mario Bergoglio, who told him that if he were pope, the beatification and canonization of the slain archbishop would be the first thing he would pursue. When Cardinal Bergoglio was elected on March 13, Monsignor Delgado told local media it was “a wonderful surprise.”

Archbishop Romero was a staunch defender of the poor and a vocal critic of human rights violations by the military junta that ruled El Salvador. He was assassinated on March 24, 1980, as he celebrated Mass in San Salvador. The Congregation for Saints’ Causes authorized the opening of his cause in 1993. Often the Congregation for the Doctrine of the Faith is asked to review the writings of candidates for canonization to ensure they are free of doctrinal error. Many people working for Archbishop Romero’s cause described the review as “blocked” in the congregation from 2000 to 2005.

One of those supporters is Roberto Morozzo della Rocca, a professor of contemporary history in Rome and author of Primero Dios: Vita di Oscar A. Romero (“God First: The Life of Oscar A. Romero”). He said Archbishop Romero’s “enemies claimed there were theological errors” in his writings and sermons. “This took years of work to clear up.”

The next step in the process is a formal papal declaration that Archbishop Romero died a martyr—that he was killed because of his faith. Opponents of his cause have claimed his assassination was politically motivated. A miracle is not needed for the beatification of a martyr.

Regardless of how the canonization advances, “the Salvadoran people have named him saint long ago,” Bishop Rosa Chávez said.

From AP, CNS, RNS, Staff and other sources
Show Comments (
1
)
Comments are automatically closed two weeks after an article's initial publication. See our comments policy for more.
ed gleason
9 years ago
Stalling the process is understandable..e.g. 'lets examine his holiness ' But CDF blocking ia an active negative stance. Of course the death squads would like 'blocking'. We need to know who in the CDF blocked.. he needs to be vetted and stand for dismissal.