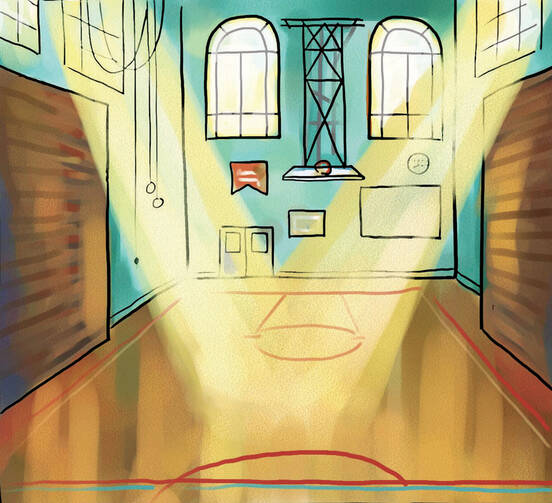 Here’s a wonderful, redolent, crucial part of our Catholic childhoods that we do not talk about much and maybe we should: the sweet, spicy, sharp, stinging scent of old gymnasiums in old Catholic schools, with their slightly sagging stages on which the Christmas pageant was held, and commencement exercises, and the annual visit from His Excellency the Bishop; and the side basketball baskets that folded up to the ceiling if necessary and had to be cranked up and down with a pole 1,000 feet long that could only be wielded properly by the gruff wizard of a janitor who knew where everything was and could fix everything and could clean up any and all accidents and could, if necessary, like that one time perform cardiopulmonary resuscitation, not to mention temporarily splint broken fingers and ice swollen ankles and soothe Mrs. Adams when she wept uncontrollably the day Kennedy was murdered.

And the creaking, golden, dusty, wooden floors with their dead spots in the corners toward which seasoned defenders angled their man in crucial moments of games when you needed a turnover in the worst way, like against the powerhouses like St. Mary Star of the Sea and St. William the Abbot; and the ancient bathrooms which probably were imported whole and untouched from the catacombs beneath the Eternal City and were dotted with heartfelt mosaic messages from the early Christians; and the bleachers that were folded shrieking and groaning back up against the gym wall by a tremendous muscular effort from the whole team, even the coach, and also as many fathers as could be recruited to push, and even that one time Father Pastor, although he was older than all the dads put together and rumor had it that he had known St. Thomas Aquinas personally.

And the immense, mullioned windows, which also had to be cranked open with long, rusty, metal poles and which had not been cleaned since the time Elizabeth Taylor borrowed the church for one of her 50 weddings and the church and school and rectory and convent were cleaned and repainted by an anonymous gift from a Welsh actor, who married her every five years or so; and the tremendous doors, each heavier than a hill, each reportedly made from metal harvested from Luftwaffe airplanes shot down by members of the parish; and the ancient basketballs, some as flaccid as towels, which shared the utility closet with rubbery dodgeballs and moldy softballs and baseballs stained so green with grass that they looked like fishing floats; and metal folding chairs stamped with the name of the parish and painted a color never seen before and never again in the world except on parish folding chairs, a color something like gray and brown had gotten married and gone to sea for their honeymoon cruise and both were terribly seasick; and the occasional sparrow and swallow and even once a crow in the gym, because the kids would prop the emergency exit doors open to ventilate the building, knowing that the dramatic signs warning about sirens and alarms were total fiction; and the stray socks and mathematics textbooks and love notes beneath the stage, where you could also find most of the props from the Christmas pageant, not to mention supplies for May Day and unopened boxes of Baltimore Catechisms and most of a bottle of Four Roses whiskey.

And the twin basketball hoops at each end of the gym floor, one an inch higher than the other, a fact known to the home team, which is why we went that way in the second halves of games; and the baskets’ battered backboards, once white but now a sort of pearl gray, with the ghostly imprints of a hundred thousand bad shots stamped faintly on the wood like a code; and the latticed metal struts that proffered the baskets thirsty for basketballs; and the silvery nylon nets, never whole for more than a day, stitched anew to their stalwart loops before every game by a slight boy sitting on the shoulders of an unsteady, burlier boy; and the two referees, aging and slightly paunchy now but sure of their authority and quick to issue technical fouls for abuse of equipment and disrespect of the game; and the squeak and squeal of sneakers during basketball and volleyball and dodgeball and kickball games, the last held in the gym only on days of epic and fearsome and inarguable rain; and here the thought occurs to me that the sweetest sound of my Catholic childhood, perhaps the sweetest song and prayer of all because it was so open and innocent and untrammeled and made by and of and for sheer wild headlong joy, was the music of all those sneakers. Remember?

Brian Doyle is the editor of Portland Magazine at the University of Portland and the author, most recently, of the essay collection Grace Notes.

Show Comments (
3
)
Comments are automatically closed two weeks after an article's initial publication. See our comments policy for more.
Paul Leddy
8 years 2 months ago
Two thumbs up. The best reading I've read in a while. Good job.
Patricia O'Neill
8 years 1 month ago
Absolutely pinpoint perfect description of thousands of elementary schools......including mine and my husband's! Delightful reading and brought back so many happy memories. Thank you Brian Doyle for such a nostalgia piece!
Nurteik Poole
7 years 11 months ago
I'm really glad to read the post and specially the depiction about those gym schools that to of olden days.Here