Skip to main content
Synod on the FamilyOctober 6, 2014 issue

The Nuclear Option: A call to refocus on the love between a man and a woman 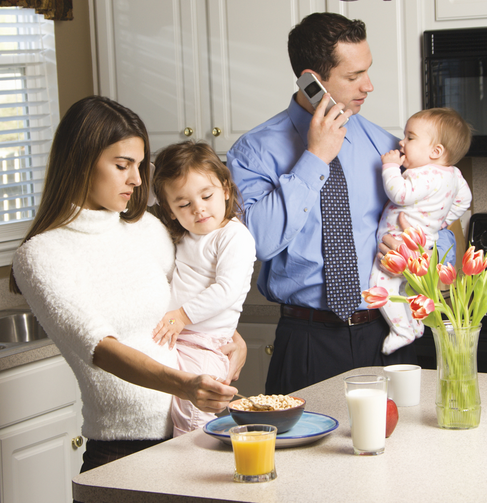 Contraception and the possibility of readmitting divorced and remarried Catholics to the sacraments have captivated the imagination of many Catholics. Many of them hope that when the bishops of the world meet this October fot the Synod on the Family, they will focus on these issues.

These are undoubtedly important questions. But there are other problems that should also be taken into account. The rise of homosexual unions requires that the bishops give thoughtful attention to the higher value to be found in the permanent and exclusive sexual love of a man and a woman. There are also changing ideas about the nature and purposes of marriage that need to be addressed.

Traditionally, there was a division of labor in the family between husband and wife; the former being “the breadwinner” and, at least notionally, head of the family, while the latter maintained the household and was responsible for the nurture and care of the children. The advancement of women’s rights has substantially altered these arrangements. There is now an equality between the sexes that has not only changed relations between men and women in society at large, but has also created a new experience of marriage itself. Now, in many cases, both husband and wife have careers. There is less separation of roles within the home and a greater sharing of parental and household responsibilities. This division of labor, which once gave basic stability to conjugal life, has generally disappeared.

More significantly, the time-honored distinction between parent and child has become blurred or ignored. The modern household revolves around the children. Their security and interests have the highest domestic priority, and both parents are deeply immersed in the lives of their offspring. In this culture of “hyper-parenting,” spousal love has little independent significance within the general experience of family.

The child-centeredness of modern marriage has brought many positive benefits. Children raised in such households feel more loved and secure, more at ease with themselves and others, and more confident about their abilities at school and on the playing fields. Parents, meanwhile, have gained from the rejection of rigid gender roles. But the change has not been unambiguously for the better. When the welfare of the children becomes virtually an obsession, the love between husband and wife does not fully develop. The relations between them become more familial than erotic. There is less time for deeper physical and emotional intimacies and, in many cases, lessening interest in them as well. Consumed by work and parenting, such couples come to see themselves as partners more than lovers. They share little that can be separated from their mutual concern for the good of their children. As the years go by, they begin to lose any deeper sense of a companionship and mutual affection that transcends, but does not oppose, the other purposes of family life.

In his book The Fate of Man in the Modern World, Nicholas Berdyaev observed that when married love is bound up with family rather than with personality, the person affected—whether husband or wife—cannot endure such a state of affairs. Feminism has highlighted this problem on behalf of the wife, who is struggling to establish her independent identity and is desperately trying to balance career and family. But the situation diminishes the male partner as well, especially if he feels excluded from whatever bonds may exist between mother and children.

These painful realities are particularly difficult for some bishops to comprehend, since they have for centuries emphasized procreation as the fundamental purpose of marriage. They have little appreciation for the depth and scope of spousal love when it is not directly concerned with reproduction. They understand how married couples become father and mother but their continuing union as husband and wife is of little consequence, even though it is at the heart of the sacrament. At the synod, the bishops will stress the importance of procreative love, but they also need to articulate the independent value of the spousal relationship between an adult man and woman. Only then will the hierarchy speak with comprehensive authority about the nature and purposes of sacramental love.

The Demands of Love

Yet years of marriage can help them reach this understanding. Unfortunately, the individualism of American culture understands personal happiness as an individual matter rather than as an aspect of a shared life. Under these circumstances, the vocation of spousal love is often seen as an impediment to self-fulfillment. But we need to remember that the mutuality at the heart of spousal love between a man and a woman is not limited to their sexual capacity to engender new life. The sacramental union is a total sharing of life and love, and, as a couple, the husband and wife complement each other in ways that are virtually inexhaustible. If married love matures—and in modern life the “if” is significant—the partners can both experience even more deeply the happiness that flows from exclusive and durable sexual commitment.

In the dynamics of married love, each should delight in the life and accomplishments of the other, because the good of the beloved is an essential aspect of each lover’s own happiness. Such happiness extends beyond parental and domestic experience. Under the conditions of modern equality, both wife and husband seek some form of personal fulfillment beyond the home, especially in terms of employment. Work can be a matter of financial necessity, but it can also be an expression of personal freedom. Such external engagements can create difficulties, not just for the care of the children, but also for the marriage itself. The conjugal love between the couple is impaired when the satisfactions and burdens of such occupations are experienced without reference to the community of life and love between the spouses.

The initial romance of marriage is exuberant, but it is impermanent. At the beginning each is so absorbed in the other that they give inadequate attention to themselves. Here lies an unexamined problem: the love that we have for another must be compatible with the love that we have for ourselves. The blissful unities that initiate a marriage and are consummated in the creation of new life become strained as partners become more aware of their own need for self-fulfillment. Such legitimate self-love becomes selfish if it is forgotten that from the beginning there has been a perception of something lovable in the other that must also be sustained.

In married love there is a mutuality that cannot be limited to generative ends. Love between spouses is love between persons, persons who affirm and support each other in all the various activities of a complete life, whether they are undertaken alone or in the company of the other. If attention is given to this aspect of a mature marriage, the husband and wife should draw closer together in intimate friendship and mutual respect. As love for each other deepens, the responsibility they bear for their children is seen in a more balanced perspective. As the spouses become more concerned with each other, excessive parenting will decline. The children may receive less direct attention, but their lives will be greatly enriched by the witness of the love that their parents show for each other. And as husband and wife gradually develop their intimate friendship, they are preparing for the life they will have together after the children are no longer with them.

Cornelius F. Murphy Jr., is the author of Beyond Feminism: Toward a Dialogue on Difference (The Catholic University of America Press).

Show Comments (
2
)
Comments are automatically closed two weeks after an article's initial publication. See our comments policy for more.
Abigail Woods-Ferreira
6 years 10 months ago
Yes, yes, yes to all of this. I want to add that children not only benefit from being witnesses to the love between their parents, but they also benefit from not having childhoods that are "all about them." My parents put each other and their relationship first, they always drew healthy boundaries and set limits on how much they were willing to extend themselves for my and my siblings' activities, and they created space in our house for everyone to have quiet "Me Time," including themselves. They also always let us know that we were loved unconditionally and that these boundaries were set for our good, so we would learn that "the world does not revolve around us". We were always required to give as well as receive as members of the family. I am so thankful for my parents' commitment to their marriage and their witness of love. But I am also very thankful that the home life they made for us was not centered around us.
6 years 9 months ago
Will someone immediately get Cornelius Murphy onto the agenda of the coming synod? Please!