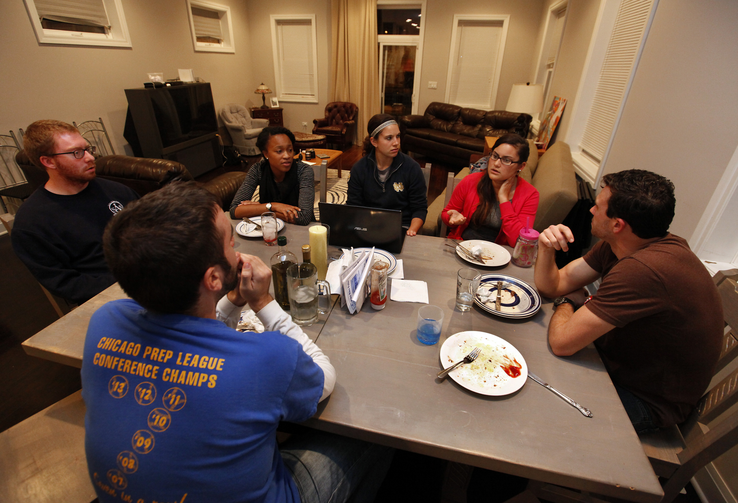 Maria Rodriguez is not a religious sister, but she lives and works like one.

The 23-year-old San Diego native teaches third-grade students in a Chicago Catholic school and lives in a house with other new schoolteachers.

Rodriguez and her housemates exchange ideas about their educational ministry, pray together, participate in community outreach projects with one another, and live very much like the vowed men and women religious who once dominated the U.S. Catholic school system.

Everyone in that household is part of the University of Notre Dame's Alliance for Catholic Education program's teacher formation, which was set up with some of the same tenets that exist in religious communities.

ACE, as the alliance is known, "focuses on preparing young people in three pillars -- in spirituality, in professional teaching, and living in community," said Benny Morten, principal at St. Ann School in Chicago and a former ACE teaching fellow. "Those are three important aspects of a school community itself."

"It is almost like a religious community and I would say that's not by accident," said John Schoenig, teacher formation director for ACE. "It's one of those things where, you know, good artists borrow and great artists steal.

"This was an idea that worked quite well for many generations in the Catholic Church and I think this is one of the more attractive elements of our formation model, of our framework."

"First-year teaching can be very difficult, so it's great to live in a community with other people going through the same things," said Matt Gring, an ACE teacher at St. Ambrose Catholic School in Tucson, Arizona. "There's a lot of support, a lot of both professional support, personal support, spiritual support."

The University of Notre Dame in Indiana developed the ACE program more than two decades ago to address the needs of struggling Catholic schools throughout the country. Other U.S. Catholic universities established similar programs for the same reason.

The Catholic school system boasted booming enrollments in the mid-20th century at a time when the Catholic Church enjoyed flourishing religious communities of vowed men and women to teach in those schools.

As the numbers of women religious teaching in the schools waned and they were replaced with lay teachers, tuition spiked to pay for those salaries and enrollment nose-dived, forcing the closure of thousands of U.S. Catholic schools.

Re-creating some aspects of the religious communities in the teaching formation program is one method ACE employs to help reimagine Catholic schools for the 21st century, Schoenig said.

"It's really a fully integrated approach to teacher formation," he told Catholic News Service during an on-site interview at the University of Notre Dame. "The point is that one lives and breathes in one's ministry. It's just the ocean that we swim in is continuous improvement of teaching practice as well as spiritual growth."

It's a value adopted from the men and women religious who built the U.S. Catholic school system, Schoenig said.

"We all work together on our own spirituality to help each other grow, as well as coming up with ways to help our students grow," said Jessica Jones, a 22-year-old ACE teacher and colleague of Rodriguez at Maternity of the Blessed Virgin Mary School in Chicago.

As Jones gathered her fourth-grade students to sit around a statue of Mary in her inner-city classroom, she told them how faith could impact every aspect of their lives, from their school work to being a good citizen in their community.

That notion of charism in the schools eroded as religious vocations declined, and Catholic schools were staffed by lay teachers who came from many different universities, worshipped in many different parishes and had many different approaches to education, he said.

"I think we're seeing a reanimation of that... with ACE and programs like it," Schoenig said. "These young (teachers) are coming in and they're really being able to help cultivate, within their own particular school, a charism that is unique to the school community, but nonetheless reflective of church teaching."

Ryan Gallagher, a fourth-grade ACE teacher at St. Ann School in Chicago, said the charism in his school community has helped him grow professionally, personally and spiritually.

"It's integrated my faith with my vocation and I can see how that's impacted the students I teach," said Gallagher, a 23-year-old native of Duluth, Minnesota. "I've learned that teaching is a service and that it's a vocation to serve those around you. You are doing it for your kids and your community, your principal and everyone around you, not just for yourself."

When Rodriguez ponders the impact her teaching community is having on the lives of her students, she comprehends the importance of her mission and says that makes her even more determined to help U.S. Catholic schools flourish.

"You can incorporate spirituality of Catholicism in everything you do, and this is what I'm able to convey to the kids in my class," she told CNS as her students read their books. "Whether it's a math program, or you are talking about current events. We discuss how war affects us and then we give a prayer. So they humble themselves and are able to pray for others, think of others, put themselves in the shoes of others in a spiritual way.

"If you can get them interested on a spiritual level, they really feel it inside their hearts. They can connect to it," Rodriguez said. "With that it gets them excited to learn things, like math facts, or to take the time to really comprehend what they're reading. "It helps them become not only academic learners and achievers, but it makes them good people."