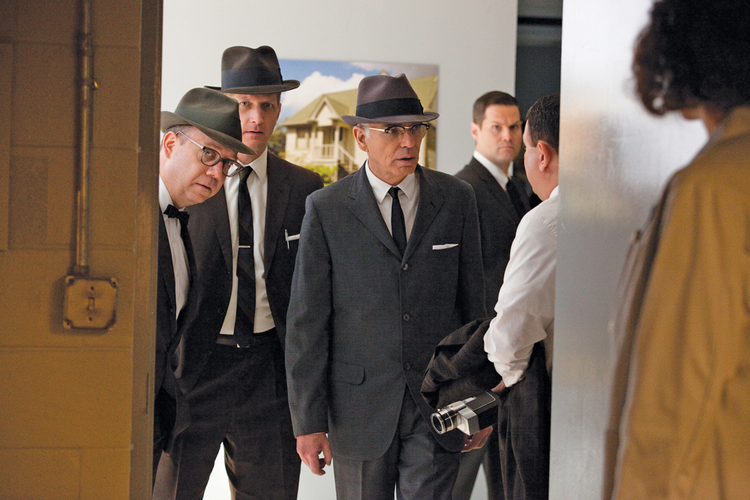 The most important news photographer of the 20th century was a Russian-Jewish immigrant clothing manufacturer from Dallas, Tex., who almost left his camera home on the day his life went crazy. Abraham Zapruder, whose half-minute film has fueled a half-century of conspiracy theories, recorded a presidential assassination, wept, said he thought the gunman was behind him and sold Life magazine the rights to his movie. Today its 26.6 seconds can be watched on YouTube.

The accomplished actor Paul Giamatti plays Zapruder in Peter Landesman’s Parkland, a film whose intent seems to be a kind of sweeping up of Kennedy assassination ephemera, a celebration of all the marginal participants who have been neglected since Nov. 22, 1963, by the likes of Oliver Stone (“JFK”) or Neil Burger (“Interview With the Assassin”) or any of the other filmmakers who have tried to nail down the ineffable plot points in the Kennedy narrative or make up their own. Landesman, who was accused of his own creative reportage when he wrote about sex slavery for The New York Times Magazine, does not really have an aggressive objective regarding the “truth” of the Kennedy assassination; his editorializing manifests itself mainly through omission or adherence to the official line.

But it is hard to imagine anyone, including the film’s makers, approaching “Parkland”—the name of the Dallas hospital where Kennedy and then Lee Harvey Oswald, and a few years later Jack Ruby, all died—with zero presumptions about the single-bullet theory, the man with the umbrella, the questions surrounding the entry/exit wounds or the burning of the infamous Oswald letter. This last bit is executed late in the film by the F.B.I. agent James Hosty (Ron Livingston), in a scene reimagined by Landesman with an air of ritual and “Godfather”-evoking cross-cutting between Parkland and the lighting of the eternal flame beside the Kennedy’s grave at Arlington, after which a conscience-wracked Hosty says a Hail Mary.

Suffice it to say, there is a strong strain of visual Christian commentary going on throughout “Parkland,” including the haloed close-ups of the crucifix placed on Kennedy’s chest, the administration of last rites by the Rev. Oscar L. Huber (Jackie Earle Haley), the attentiveness to the president’s spiritual needs by the supervising nurse Doris Mae Nelson (Marcia Gay Harden)—all of thelm real people, usually overlooked by history, their lives having immediately become the collateral damage of a madman’s act. And as far as “Parkland” is concerned, that is madman in the singular—no second gunman on the grassy knoll.

Even those born long after the assassination have their opinions about the Kennedy murder. What is Landesman’s opinion? Basically that there were a lot of good people who got caught up in and/or trampled by the action surrounding the events of Nov. 22. As well as some truly miserable characters for whom “Christian” seems an alien concept—Marguerite Oswald, for instance, the mother of Lee Harvey Oswald, who numbers herself among the principal victims of the assassination, much to the mortification of her son Robert (the terrific James Badge Dale). Marguerite, portrayed with a possessed brilliance by Jacki Weaver, is almost unbearably awful, but she also gives the movie an astringent quality it otherwise lacks, which is welcome.

“Parkland” was produced by the American Film Company, which was behind the Lincoln-assassination film “The Conspirator,” directed by Robert Redford (which just adds to all those mythic Kennedy-Lincoln parallels). The company was founded by Joe Ricketts, according to its Web site, in order “to celebrate the extraordinary characters and events from American history…with the vision that films can entertain while changing the way audiences view our collective past.” While the site also notes that Ricketts founded TD Ameritrade, it neglects to mention that he served on the board of trustees of the neoconservative American Enterprise Institute, whose members were onetime architects of much of the policy of the George W. Bush administration and include Paul Wolfowitz, Newt Gingrich and John Bolton.

Still, it is hard to find a political thread running through “Parkland,” unless one equates religious enthusiasm with Americanism. And this “Parkland” certainly does. Had Landesman spent a bit more time on his characters and narrative, he might have made a more watchable movie, but of course he has a lot of people to work into the mix: Dr. Charles Carrico (Zac Efron), the hospital intern who first worked on the wounded president; Forrest Sorrels (a very convincing Billy Bob Thornton), the supervising Secret Service agent at the assassination; Zapruder’s assistant, Marilyn Sitzman (Bitsie Tulloch), who was with her boss while he shot his film; the Kennedy aide David Powers (Gil Bellows) and Oswald himself (Jeremy Strong). It is quite a cast, some of whose members have only small roles, but all work effectively. One of the things Landesman seems to get very right is the mix of sadness and anger felt by all those on the scene, and how it manifested itself in a jockeying for jurisdiction and an aggressive assertion of territory. The wrestling over Kennedy’s casket during a dispute among the F.B.I., the Secret Service and the Dallas police is beyond embarrassing, but it really happened. The city of Dallas, which managed to let a president and his assassin get murdered in the same weekend, does not come off well: “What a [expletive] place to die,” someone says, and no one argues.

“Parkland’s” contribution to Kennedy assassination lore is limited. The dead president’s face, virtually unmarked as he lies on a hospital gurney, seems to be modeled after the autopsy photos, which are themselves a subject of controversy. The whole issue of the trajectory of the assassin’s bullets is skipped; the Zapruder film is not shown (only Zapruder’s reaction to the killing, which is quite effective). Little foundation is set down for the conspiracy theories that would follow.

The point instead is how human complexity and kindness manifest themselves in a time of what is both national catastrophe and a personal crisis for all involved. At the Oswald funeral, attended only by his immediate family, members of the media are pressed into acting as pall bearers; a couple of cemetery employees, touched by the sight of Robert Oswald single-handedly filling in his brother’s grave, lend a hand; that they are black men is not irrelevant, given what Kennedy already meant to the issue of civil rights in the United States. Helping bury the man’s assassin is a portrayal of charity in its purest form, and if there’s an agenda to “Parkland,” that seems to be it.