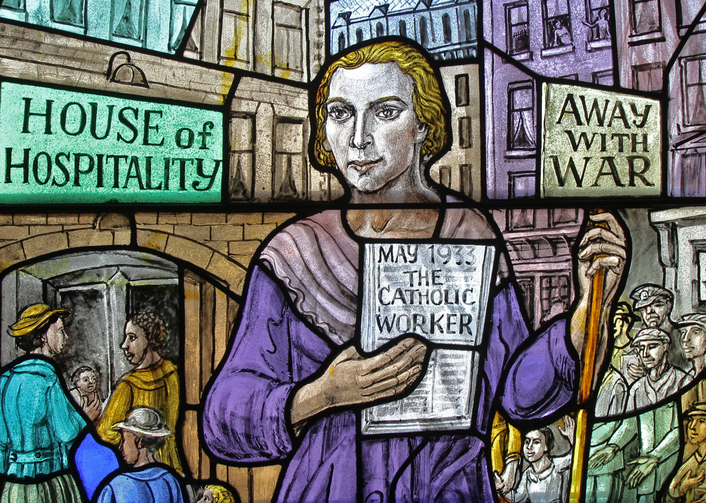 The cause for Dorothy Day’s possible eventual beatification and canonization moved into a new phase on April 19 as Cardinal Timothy Dolan, the Archbishop of New York, opened the canonical inquiry on the life of the Catholic Worker movement founder, gathering evidence to determine if Dorothy Day lived a life of “heroic virtue” in the eyes of the church.

The archdiocese, which is sponsoring her cause, will gather the evidence and present it to the Vatican’s Congregation for the Saints and Pope Francis. After carefully examining the information presented, the Congregation and Pope Francis will determine if Day will be elevated from “Servant of God,” to “Venerable” and become eligible for beatification and ultimately canonization. Msgr. Gregory Mustaciuolo, the “postulator” or chief advocate for Day's cause, said, “Beginning next week, we will begin interviewing eyewitnesses—people who had firsthand experience of Dorothy Day—in all about 50. Together, their memories stretch all the way back to the 1940’s.”

He added that in the coming months, Cardinal Dolan will also appoint a historical commission that will issue a report placing Day’s life in historical context and review her unpublished writings. Theological experts appointed by the cardinal will review her published writings—two readers for each publication—with an eye toward doctrine and morals.

Interviews will extend throughout 2016. Those too frail to travel will be interviewed in their home dioceses, some as far away as Europe. Because many of the eyewitnesses still live in voluntary poverty, caring for the poor, the archdiocese will assist with airfare and lodging for those requesting assistance.

Dorothy Day founded the Catholic Worker Movement with Peter Maurin in 1933 in New York City, following her conversion to Catholicism in 1927. Its “houses of hospitality” minister directly to people living in poverty and operate in over 120 places in the United States and as far away as New Zealand. In addition to providing food and shelter to those in need, members of the Catholic Worker movement publish community newspapers and websites as well as publically promote nonviolence in response to social concerns. Catholic worker houses accept no government funds—a tradition established by Day and maintained to the present. Dorothy Day remained active in the Catholic Worker movement until her death in New York at the age of  83 in 1980.

A few years after her death, the Claretian fathers began collecting materials for an eventual canonization effort. In 2000, at the request of Cardinal John O’Connor, the Vatican provided its nihil obstat, naming Dorothy Day “Servant of God” and opening the canonization process.  Cause of Canonization. The United States Conference of Catholic Bishops provided its formal endorsement in 2012, and the cause moves today into a new stage with the establishment of a canonical Inquiry.

To learn more about Dorothy Day, the Guild, and ways to help forward her cause, please visit: www.dorothydayguild.org.