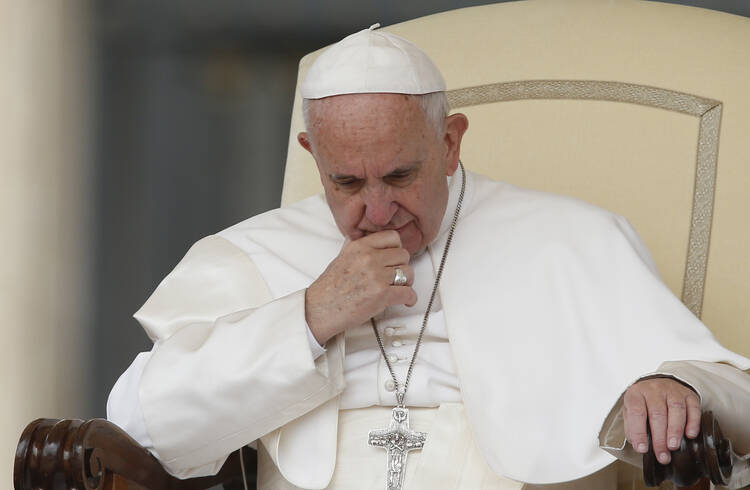 Pope Francis has issued a very important decree regarding the accountability of bishops, which makes it possible now to remove diocesan bishops for neglecting their duties, in particular in regard to protecting minors and vulnerable adults from sexual abuse.

The decree comes in the form of an Apostolic Letter motu proprio released by the Vatican on June 4, responding to the many calls to hold bishops fully accountable for failing to act to protect children and vulnerable adults. With this decree Francis addresses that problem head on.

In it, Francis recalls that already “canon law provides the possibility of removal from ecclesiastic office ‘for grave reasons’” and this applies also to “diocesan bishops, eparchs and those who are equivalent to them in law.”

In the decree, Francis said that he intended “to specify that among those ‘grave reasons’ is included the negligence of bishops in the exercise of their office, in particular in relation to the cases of sexual abuse committed on minors and vulnerable adults,” explaining that this had been envisaged by earlier decrees on this matter. He mentioned the motu proprio issued by John Paul II in 2001 (Sanctorum Sanctitatis Tutela) and the amendments to this by Benedict XVI in 2010.

In the letter, he emphasizes that “the church loves all her children, but cares for and protects with most particular affection those who are small and defenseless.”  Aware of this, he said, “the church dedicates a vigilant care to the protection of children and vulnerable adults.”

Francis said this task of protecting and caring belongs to the whole church, “but it is especially through its pastors that this is exercised.”   For this reason, he said, “diocesan bishops, eparchs, and others who have responsibility for a particular church must exercise particular diligence in protecting those that are the weakest among the persons entrusted to them.”

The decree's first four articles explain how the process for removal can be carried out through the relevant congregation of the Roman Curia. It concludes with a fifth article specifying that the congregration must then submit their decision to the pope for his specific approval. The reason for this, though the decree does not say so explicitly, is that the pope is the only one who can remove a bishop from office. The decree also says that before giving his definitive decision the pope will draw on the assistance of “a college of jurists” specially established for this purpose.

Pope Francis' motu propio also discusses the removal of bishops for other reasons, but its main focus is on dealing with bishops who are negligent in protecting minors and vulnerable adults from sexual abuse.

Update: the post above has been updated to identify the earlier papal decrees to which Pope Francis referred.

Below, Gerard O'Connell's working translation of the motu proprio into English is included, pending the release of an official translation.

ARTICLE 1 has four sections. It says:

No. 1: The diocesan bishop, or eparch or the one, who even for a temporary period, has the responsibility for a particular church, or a community of faithful that is equivalent to it in accordance with canon law (CIC 368 and 313 CCEO) can be legitimately removed from his office, if he has, through negligence, done or omitted to do acts that have provoked grave damage to others, whether it relates to physical persons, or it relates to a community in its totality.   The damage can be physical, moral, spiritual or patrimonial.

No. 2: The diocesan bishop or eparch can be removed only if he has objectively failed in a very serious way in the diligence that is required of him by his pastoral office, even without grave moral culpability on his part.

No. 3: In the case that it relates to the abuse of minors or vulnerable adults, it is sufficient that the lack of diligence is grave.

No. 4: The major superiors of religious institutes and of societies of apostolic life of pontifical right are (regarded as) equivalent to the diocesan bishop and the eparch.

No. 1: In all cases in which there appear serious indications of what is envisaged by the previous article, the competent congregation of the Roman Curia can start an investigation into this, giving notice to the interested party and giving him the possibility to produce documents and testimonies.

No. 2: The bishop will be given the possibility to defend himself, which he can do through the means provided by law.  All the stages of the investigation will be communicated to him and he will be given the possibility to meet the superiors of the congregation.  If the bishop does not take the initiative then that encounter will be proposed to him by the congregation itself.

No. 3: As a follow up to the arguments presented by the bishop, the congregation can decide on a supplementary investigation.

No. 1: Before taking its own decision, the congregation can meet, if it is opportune, other bishops or eparches belonging to the episcopal conference, or the synod of the bishops of the church with its own right (sui juris), of which the bishop or eparch is part, so as to discuss the case.

No. 2: The congregation will make its determinations gathered in an ordinary session.

Whenever it is felt opportune to remove the bishop, the congregation will establish, on the basis of the circumstances of the case, if:

No. 1: To give, in the shortest time possible, the decree of removal;

No. 2: To fraternally exhort the bishop to present his resignation within fifteen days. If the bishop does not give his response within the period envisaged, the congregation can issue the decree of removal.

The decision of the congregation referred to in articles 3 and 4 must be submitted for the specific approval of the Roman Pontiff, who, before taking a definitive decision, will draw on the assistance of a special college of jurists, designated for this purpose.

I order that all that I have decided with this Apostolic Letter given motu proprio be observed in all of its parts, notwithstanding whatever is contrary to it, even if worthy of particular mention.  I decree that it be published in the official commentary of the Acta Apostolica Sedis, and promulgated in the Vatican daily, L’Osservatore Romano, and enter into force on 5 September 2016.

Gerard O’Connell
@gerryorome
Show Comments (
6
)
Comments are automatically closed two weeks after an article's initial publication. See our comments policy for more.
Lisa Weber
6 years 7 months ago
This decree is a positive step, taking necessary action to address an ill of the church. The use of the image of mother is interesting because the action of "mother" in protecting the small and defenseless is exercised "especially through its pastors..." If an action is taken through the pastors, then it would be action of fathers - if one wants to use the image of family. The "mother church" image needs to be discarded because Jesus clearly indicated that the church is a community rather than a family.
Crystal Watson
6 years 7 months ago
But this seems like a step backwards ... "Pope Francis Scraps Abuse Tribunal for Bishops Who Cover Up Pedophile Priests" ... http://www.nbcnews.com/news/religion/pope-francis-scraps-abuse-tribunal-bishops-who-cover-pedophile-priests-n585841
Carolyn Disco
6 years 7 months ago
Thank you, Crystal Watson, for making clear that this is a step backwards in avoiding bishop accountability. Francis had indicated a desire for a tribunal to handle such cases, but the backlash from curial and episcopal sources apparently won out. Why can't there be any special tribunal or court judging bishops? I fear this motu proprio may get as meager application as the 1917 and 1983 canons have. Throughout decades of the sexual abuse crisis, any number of specific charges could easily have been used to remove bishops who enabled abuse (or were abusers).. The church showed negligible if any interest in doing so. US bishops John Nienstedt and Robert Finn finally resigned, but with no mention that the resignations had anything to do with any (criminal) negligence. If Benedict could not even bring himself to pronounce openly the guilt of Maciel, Legion of Christ founder, of what use is canon law? Maciel's victims, after decades of following its closed procedures, were left hanging with a papal "invitation" to their perpetrator to pray. No acknowledgement that they in fact had told the truth. It is my privilege to know a survivor of Maciel's brutal crimes for whom there has been scant justice. Perhaps we need the particularity of civil law to call a spade a spade. NH's attorney general described episcopal conduct here as "willful blindess, conscious ignorance and flagrant indifference to the dangers priests posed to children." Obstruction of justice, failure to report abuse, accessory after the fact, sworn false statements and even alleged perjury found expression in a detailed investigation by law enforcement. Here is what one petition with relevant citations to remove bishops looked like. It was filed by laity in 2003 exercising their canonical rights in the church. It went nowhere of course, though this website.unknown to us, placed it online for the record. http://liberalslikechrist.org/PetitionvsNHBishops.pdf
Crystal Watson
6 years 7 months ago
Hi Carolyn. I think that at the end of the day, it will be the civil authorities that we will have to rely on render justice on the sex abuse - the church doesn't seem to have the will to do it.
Matthew McCormick
6 years 7 months ago
AMEN!!!! CALL THE POLICE!!!! LAITY, CALL THE POLICE!!!!
Matthew McCormick
6 years 7 months ago
I'll believe it when I see it. I'm getting more that way with the Church.