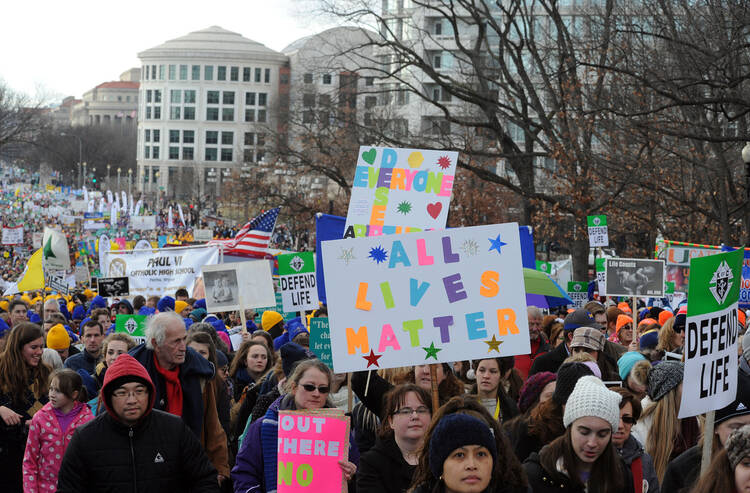 All of the usually expected groups were in attendance at this year's March for Life in Washington Jan. 22, the 42nd anniversary of the Roe v. Wade decision. There were busloads of students from Catholic schools and Catholic universities, evangelical churches, conservative action groups and more. However, one group gathered beside the Smithsonian Castle on the National Mall touting nose rings and fluorescent hair was far from the typical pro-life crowd.

The Pro-Life Alliance, a coalition of "nontraditional" organizations that have banded together for the protection of the unborn, held its first news conference an hour before the March for Life rally began. Aimee Murphy, the group's founder and spokeswoman, addressed the media, stating the alliance's mission is to bring all of its groups together to "abolish abortion regardless of religious stance, political affiliation ... economics, that sort of thing" and to show that there are nontraditional pro-lifers "in the movement."

According to Murphy, alliance members "will all work together to abolish abortion."

Upon starting the news conference, Murphy reiterated the group's stance to unite "atheists, pagans, Buddhists, Muslims and Jews" on the issue of the sanctity of human life and dignity. "Being pro-life does not have to be a Catholic thing, an evangelical thing or even a conservative thing; we at the Pro-Life Alliance coalition intend to show unity in the pro-life issue in light of and despite of our diversity." Murphy went on to say that "alienation of nontraditional groups in the pro-life movement has made them inactive and apathetic" and that the pro-life movement is better served by "remaining united in diversity, rather than creating division by infighting."

The groups in the alliance include Life Matters Journal, Feminists for Nonviolent Choices, New Wave Feminists, Secular Pro-Life, And Then There Were None -- Pro-Life Outreach, Democrats for Life of America and Consistent Life, with more groups "who will be signing on in the days and months to come."

According to Murphy, "you could outlaw abortion with Republicans alone or with Christians alone, but you cannot create a culture of life without the support of every human being; peace cannot be attained by mere factions."

Other speakers from groups such as New Wave Feminists and the Democrats for Life of America followed Murphy in stating their desire to create a culture of life across all walks of life.