Missed Connections: ‘The Humans’ offers a fresh take on the family drama. 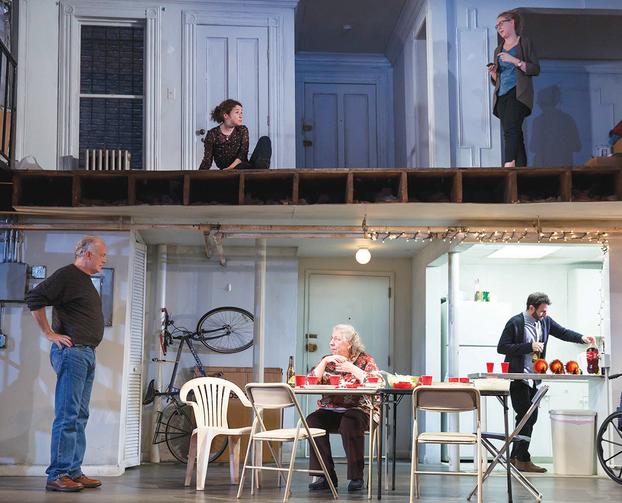 The social-conservative notion that the family is the basic unit of society is uncannily mirrored by the common leftist and feminist critique of the family as a factory for authoritarian values—a basic unit, all right, but of a corrupt and joyless social order. You can sometimes hear a similar complaint about American playwriting: that it keeps returning, like an aimless adult child who never moves out, to the family as a default template for drama. From Eugene O’Neill to Arthur Miller, from Lorraine Hansberry to Tracy Letts (“August: Osage County”), the “great American play” often seems stuck in the living room.

Of course, many iconic American plays, from “Our Town” to “Angels in America,” have a much wider canvas. What is more, a focus on family is hardly a uniquely American predilection (see the Oresteia, “King Lear,” “A Doll’s House”). It is among the signal achievements of Stephen Karam’s stark and beautiful new play The Humans (now running Off-Broadway at the Roundabout’s Laura Pels Theatre through Jan. 3, 2016, and scheduled for a Broadway transfer next spring) that it seems, from its first moments to its last, to transcend the confines of the “family play.”

Yes, Karam assembles a basically intact nuclear clan over a Thanksgiving dinner, at which they bicker, josh and mutually disapprove across generations. There are tensions, revelations, half-reconciliations, a bit too much alcohol consumed. But context is everything: The setting for this uneasy gathering of the Irish Catholic Blake family of Scranton, Pa., is the low-ceilinged basement of a largely unfurnished duplex apartment in New York City’s Chinatown, into which Brigid (Sarah Steele) has just moved with her sensitive, grad-student boyfriend Richard (Arian Moayed). Brigid’s parents, Erik (Reed Birney) and Dierdre (Jayne Houdyshell), have driven in for the meal from Scranton, bringing with them his dementia-stricken, wheelchair-bound mother, nicknamed “Momo” (Lauren Klein), for what Erik grimly calls “her last big trip.” Also on hand is Brigid’s sister Aimee (Cassie Beck), a lawyer recently dumped by her longtime girlfriend and hence going through the familiar first-holiday-without-a-loved-one jitters.

And yes, this is one of those dramas in which a faltering patriarch gives a toast, a little too emphatically and with more than a trace of desperation, about how family is all that really matters, even as he is watching his own fray and crumble before his eyes. Erik voices this sentiment twice in “The Humans,” but with a kind of abashed diffidence that suggests he is trying to convince himself as much as his wife and daughters. He never quite makes the sale, but Karam has written no big, declarative speeches to strip this flawed father of his illusions or to give us a clear sense of where he has arrived by play’s end. Instead, as far as dialogue goes, Erik simply makes a brief announcement, faces a moment of reckoning and some testy exchanges—and then it is straight into the logistics of getting everyone home safely. (Call a car service? And how much will that be?)

Indeed, the big moments of Karam’s play aren’t strictly in the dialogue. There’s a warm but wary Irish family singalong, a pre-meal prayer that fleetingly snaps Momo back to coherence, a few startling spills and spats and a climactic fit of writhing dementia and subsequent calming that are as harrowing yet tender as anything I’ve seen on a stage. Meanwhile, the lights in Brigid’s new apartment keep successively failing; there are shocking, never-explained thumps and bumps from an upstairs apartment and the occasional forbidding hum of the trash compactor. It is no spoiler to say that these eerie, rootless environs ultimately prove strangely both enveloping and isolating—a literal dark night of the soul.

If this all sounds unremittingly bleak, rest assured that Karam—whose previous plays include the tetchy “Speech and Debate” and the sleek, yearning “Sons of the Prophet”—is also a nimble showman with an eye for small, comic absurdities. There are laughs amid the aches and pains, in other words, though they spring less from a joke-writer’s eagerness to please than from the playwright’s sense of family itself as the ultimate inside joke. Under the director Joe Mantello, the play’s flawless cast executes an exquisitely subtle choreography of eyerolls and small exasperations, not to mention barely suppressed arguments-in-waiting, that give the play’s characters a convincing scope beyond their 90 minutes’ traffic on the stage. We get the sense that the Blakes have lived, and will go on living, for better and worse, outside our time with them.

Still, there’s no way around it: This is a heartbreaking play, and not only because Karam has matter-of-factly folded into it so many markers of millennial middle-class malaise: economic insecurity, health-care horrors, even the long twin shadows of 9/11. But the most tragic thing about “The Humans” is its unflinchingly authentic depiction of the way most families in fact don’t have the big, cathartic fights and clean breaks we often see in plays and films—that instead we spend so much of our time together just dealing with the exigencies of living, cleaning up after ourselves and each other, snatching moments of connection and comfort but otherwise managing or medicating our problems rather than resolving them. Like poor, anxious Erik, we will all eventually call that car service and wait in the dark for it to arrive.

Rob Weinert-Kendt, an arts journalist and editor of American Theater magazine, has written for The New York Times and Time Out New York. He writes a blog called The Wicked Stage.