Mental Illness: Can Parishes Do More to Help? 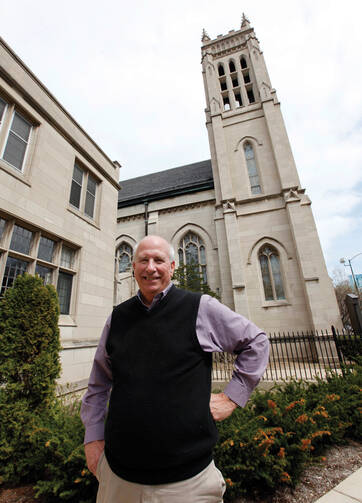 When Deacon Tom Lambert’s wife was hospitalized for open heart surgery, friends brought meals to the family’s door. “For three or four weeks, every day at 6 o’clock the bell would ring and a different family would bring us dinner,” he said.

Those neighbors and fellow parishioners were responding to a need. But a different illness in his family some years later garnered no response.

“When our daughter was diagnosed with mental illness, no one came to the door,” he said.

That was 25 years ago, and Lambert, who co-chairs the National Catholic Partnership on Disability’s Council on Mental Illness, said awareness is essential to overcome the stigma associated with a disease of the mind. In the United States, severe or persistent mental illness affects one in 17 Americans. The mental illness disability rate has more than doubled since the 1980s and increased six-fold since the 1950s.

Nancy Kehoe, a Sacred Heart sister and clinical psychologist, is the author of Wrestling With our Inner Angels: Faith, Mental Illness, and the Journey to Wholeness. When she began working with people with mental illness 30 years ago, faith issues were ignored because mental health professionals were not trained to respond adequately when a patient spoke about spirituality, she said.

“It was really unheard of in 1981 to have anyone suggest that it would be worthwhile to have a conversation with people with serious mental illness about religion because up until then, it was really just seen as part of their symptoms or a defense,” she said. “Either people pathologized [faith] or they ignored it.”

Contrary to the prevailing belief that faith was a part of a patient’s mental illness, Sister Nancy soon discovered that it was often part of an individual’s inner strength. She organized a group for people who wanted to talk about mental illness and religion. The group meets monthly at St. Paul Parish in Cambridge, Mass. When people struggle with a severe mental illness, they often feel isolated. Their behaviors may put others at a distance, and they may have difficulty holding a job, keeping relationships and living on their own.

Deacon Lambert said that many people at Sunday Mass privately struggle with mental illness and that the vast majority are managing their illness well.

“Nobody’s going to come up and say, ‘Well, I have schizophrenia, but I go to work every day, I hold a job, I have a marriage.’ But I guarantee there’s a lot of people who are in that situation,” he said.

As “people of compassion and justice,” Deacon Lambert said, Catholics can help by creating safe havens for people to talk about their mental illness and allow their faith to be part of their healing. Even a prayer intention at Mass may spark hope, he added. (Information about various ways that parishes can reach out to its members struggling with mental illness can be found on the Web site of the National Catholic Partnership on Disability at ncpd.org).

His faith was crucial in helping respond to his daughter’s diagnosis, Lambert said. “Through prayer and turning things over to the Lord,” he remembered, “saying we’re going to deal with this situation with the strength and hope that comes from God and our faith. That’s really what got us through, quite honestly. It’s as simple as that.”

From AP, CNS, RNS, Staff and other sources
Show Comments (
1
)
Comments are automatically closed two weeks after an article's initial publication. See our comments policy for more.
Bruce Snowden
8 years 10 months ago
Even Saints can be mentally ill! Years ago I heard Father Benedict Joseph Groeschel, CFR, a priest I consider holy and a good friend of mine say his Patron Saint, Benedict Joseph Labre from France, one of eighteen children, was mentally ill, obviously benignly so. Saint Benedict Joseph Labre tried to become a Religious Brother but instead spent his entire life as a homeless man, a beggar, a “hobo” given to much prayer and charity, unbathed, smelly, poorly clad, lice infested body, a friend to all and befriended by all. When word spread in Rome that he had died, tens of thousands of people rushed to the church near where he died crying out, “The Saint is dead!” This is a very abridged account of an interesting and unusual life of a man, a Saint for whom his parish did nothing to help his mental health issue – or maybe they helped a lot by recognizing his holiness! In my Parish on the other hand, there was another homeless man, a “hobo,” well-known and well loved, clearly mentally challenged, but honest and prayerful. For him my Pastor, Augustinian Recollect priest Father Edward Fagan, now deceased, reached out to him with parishioner and help tried to rehabilitate him but he’d always slipped back to his homelessness. He was also given food and money by parishioners and always returned “left-over money” to the giver! One day in early morning he was found dead on the rain-swept handicapped walkway to the Church. He looked like a water-soaked cross, both arms extended out! He loved to make the Stations of the Cross, making his image in death seem appropriate, yet profoundly tragic and sad! The Pastor financed his burial and his Mass was beautifully sung, with hundreds of parishioners attending. Let’s call him “Pete” not his real name – his was a case that was well care for parochially, even though it didn’t solve his problem. I like to think that he’s “up there” rubbing shoulders with Saint Benedict Joseph Labre, also with other once “homeless” souls, deceased parishioners and with our good Pastor, Edward Fagan, OAR!