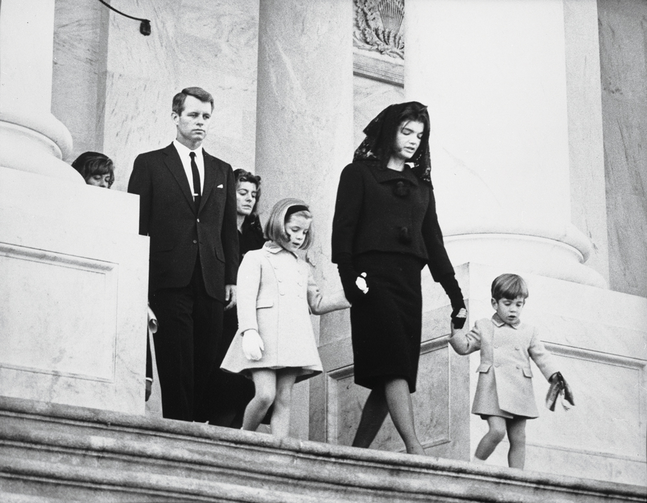 Ten days ago, we were blindingly jolted into a vision of the teetering frailty and mortality of our lives and human institutions. That stark event made us realize how constantly and how precariously any man’s life—even a life hedged with such divinity as is a king’s—sways over an abyss of blind chance, unreason and evil. Indeed, when the life so overtaken by malice or madness is that of the acknowledged leader of the entire free world, we are all engulfed in his personal tragedy. In an hour like this it comes clear that

The cease of majesty
Dies not alone, but like a gulf doth draw
What’s near it with it. It is a massy wheel
Fixed on the summit of the highest mount,
To whose huge spokes ten thousand lesser things
Are mortised and adjoined; which, when it falls,
Each small annexment, petty consequence,
Attends the boisterous ruin. (“Hamlet” III, 3)

On such a scale must we measure the sorrow and distress we feel as we look back on the brutal assassination of President John F. Kennedy.

Word of the infamy of November 22 thundered upon us with the heart-stopping suddenness of a midair collision or of a step over the brink into darkness. At one moment, it was noon under a Texas sun and a wide Texas sky. The next moment struck, and with it a long night of sorrow and horror had fallen over decent men everywhere. The first nightmarish news flashes that carried this incredible report around the world have now become an indelible page of history. Whenever November 22, 1963 is recalled, men will invariably retell its story with anger and revulsion.

A young and profoundly loved President has been struck down at the very crest of his power, talents, experience and influence. He fell victim to a senseless stroke of that very violence he had pledged all the resources of his person and his office to restrain. Now he is gone. We pray that he may rest in peace—his noble soul with God for all eternity, his still youthful body awaiting the resurrection of the dead.

We American Catholics mourn John Kennedy neither more nor less than our fellow Americans of other faiths. He was President of all the people of the United States. Catholics took his nomination and election in stride, some voting for him, others against him. We anticipated no special favors from him because of the faith he shared with us. He was simply our President—as he was everybody else’s—and as time went on, many of us came to judge that he was an extraordinarily good President for these turbulent days.

Shortly after Mr. Kennedy was inaugurated, America noted that with his election “the full first-class citizenship of U. S. Catholics” had at long last been ratified. We asked:

How do these now fully enfranchised Catholics regard their coreligionist in the White House? They respect him as their President, and they can’t deny—whether they voted for him or not—a certain natural pride that he happens to be a Catholic. But there is no gloating in the Catholic attitude. Catholics look for no special preferments or special favors, and they will get none. They would be disappointed in the President if he ran things any other way.

Even in those instances where many Catholics (and America with them) judged President Kennedy to be bending over backward in an effort not to lose precious votes in the Bible Belt, we recognized that this was a posture forced on him by the stern exigencies of American political life. Two years ago (1/13/62, p. 462) we said: “Catholics in general are not troubled by the fact that the first Catholic President finds it expedient to walk so softly on so many fragile Protestant eggs.”

But let’s make no mistake about it: Catholics are proud of him. We are proud that he was a devout, practicing adherent of our ancient faith. When Mr. Kennedy sought the Presidency, he realized that he would have to campaign every inch of the way against deeply ingrained prejudice. As we all know, he sought no quarter on the subject of his Catholic faith. He never for a moment pretended that he was anything other than a full and integral Catholic. He made a public issue of his faith in the famous confrontation he held in Houston, Texas, with a large association of Protestant ministers. After a vigorous campaign, he was elected President by a slim margin.

In the three short years since his election, he has disproved all the inherited clichés that were supposed to prove that a Catholic could not exercise the powers of President of the United States. Quietly, most naturally, John F. Kennedy proved that a Catholic could not only be President, but could be an extraordinarily good one. What all the wisdom and learning of so esteemed a thinker as Fr. John Courtney Murray could perhaps never have brought home to the minds of many American Protestants, President Kennedy accomplished ambulando. Catholics are gratefully proud of his record.

Moreover, while the actions of John F. Kennedy in Washington were once and for all demonstrating that an American Catholic could lead his country without in any way jeopardizing the Constitution, another man named John was engaged, far from Washington, in another historic demonstration of the relevancy of Catholicism to the modern world. Someone has already coined a happy set of phrases to describe these parallel achievements: Two Johns—one on the Potomac, the other on the Tiber—have, in the first three years of the 1960’s, changed the public face of Catholicism. These men named John—one, an aged Italian; the other, a young Boston Irishman who went to Harvard—had so much in common. Wittingly or unwittingly, they did so much in common. The entire earth has been their beneficiary. The people of the whole earth mourn them both with a profound sense of loss.

This article also appeared in print, under the headline “May He Rest in Peace,” in the November 18, 2013, issue.

This editorial was published by America on Dec, 7, 1963, following the assassination of President John F. Kennedy on Nov. 22. We republish it here in honor of the 50th anniversary of his death.