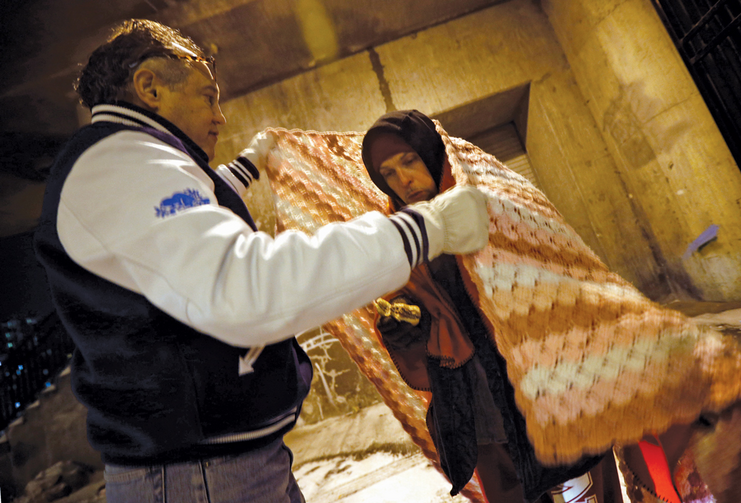 Jesus’ teachings offer good news for the righteous, whether they are the poor and marginalized or the rich who are generous with their bounty. All can find a place in the kingdom. Yet there is little comfort for those who expect that their wealth alone will save them. The story of Lazarus and the rich man is a reminder of the fate of the wealthy who ignore the poor in their midst (Lk 16:19-31).

So we should not be surprised by the highly divergent reactions to Pope Francis’ apostolic exhortation, “The Joy of the Gospel.” On the one hand, people across the globe were immediately and powerfully drawn to the pope’s message of hope and social justice. They were stirred by his critique of “the dictatorship of an impersonal economy lacking a truly human purpose,” and they were uplifted by his call for solidarity with the poor (No. 55).

Yet in the United States, a number of the famously rich, and commentators who routinely speak for them, were clearly incensed. “Marxist,” cried a few, and the charge echoed. The pope is “confused,” declared others. And still others tried to deflect the pope’s message by claiming that it was really directed to his own homeland, Argentina, rather than the United States. At least one wealthy individual threatened to withhold a donation for the renovation of St. Patrick’s Cathedral in New York.

Those who presumed to read in the pope’s words a specific economic plan were mistaken. Pope Francis, like Jesus, offered no such plan. (“This exhortation is not a social document,” writes the pope.) Jesus overturned the tables of the money changers not to implement a first-century Glass-Steagall Act, but rather to make a moral point—that the house of divine justice had become a den of thieves. Pope Francis carries Jesus’ message into the heart of today’s capitalism. He reminds us that we need a moral framework for our 21st-century economy.

That message is fundamentally subversive of prevailing attitudes in the corridors of American power, whether on Wall Street or in Washington. And it is crucial for exactly that reason. Far too many of the rich and powerful in the United States are in thrall to an economic ideology that places property rights over human dignity, even human survival. Too many believe that morality is the result of the marketplace.

That is no exaggeration. The doctrine of libertarianism, for example, as expounded by Ayn Rand and her followers, including Alan Greenspan, former chairman of the Federal Reserve, is based on the idea that economic justice is defined by the “liberty” of the marketplace. Liberty in this vision is the freedom to buy, sell and protect one’s property. Neither government, nor regulation, nor even moral self-restraint, should interfere. Taxes, for example, are viewed as a form of servitude to the state, even when the tax revenues are destined to feed the poor, sustain the unemployed, provide health to the indigent and protect the environment for all.

The Church and Property Rights

The church has rightly and consistently rejected the idea that private property rights are sacrosanct. Since the modern church first took up the economic question more than a century ago, notably in Pope Leo XIII’s “Rerum Novarum” (1891) during the first wave of industrialization (and the robber-baron era), it has favored a market economy, yet one in which the rights to private property are embedded in a moral framework. Morality and human dignity must be paramount; property rights should be responsive to the higher calling of justice.

“It is lawful,” says St. Thomas Aquinas, “for a man to hold private property; and it is also necessary for the carrying on of human existence.” But if the question be asked: How must one’s possessions be used?—the church replies without hesitation in the words of the same holy doctor: “Man should not consider his material possessions as his own, but as common to all, so as to share them without hesitation when others are in need…. To sum up, then, what has been said: Whoever has received from the divine bounty a large share of temporal blessings, whether they be external and material, or gifts of the mind, has received them for the purpose of using them for the perfecting of his own nature, and, at the same time, that he may employ them, as the steward of God’s providence, for the benefit of others. (No. 22)

In the same vein, Leo XIII held that voluntary contracts may be deemed unjust when the contracting parties are too unequal in their wealth and power. As Pope Paul VI later put it in “Populorum Progressio” (1967), referring back to these teachings, “The rule of free consent remains subservient to the demands of the natural law.” And on a global scale, Pope Paul VI noted, free trade between nations must also be subject to the demands of social justice.

Church teaching describes the moral framework of property rights as the “universal destination of goods.” Yes, the church avers, property is and should be (mostly) privately owned. Private property boosts efficiency, protects the family and enables the middle class to resist the predations of the state. Yet property must also be understood as a public trust; the needs of humanity must take precedence over individual claims to property, especially when the needs of the poor or the environment are at stake.

In line with this great tradition, Pope Francis aims at nothing less than re-establishing a moral foundation for our local, national and global economic dealings, by spreading the church’s teachings of social justice, which has roots in Jewish teaching as well. But beyond specific doctrines, the pope is invoking universal themes that are shared by many major religions, as well as by agnostics and atheists, whom he recently invited to join in the quest for justice and peace. He writes that an interreligious dialogue “which seeks social peace and justice is in itself, beyond all merely practical considerations, an ethical commitment which brings about a new social situation” (No. 250).

Pope Francis is reinvigorating a widely if not universally shared moral code, one that has been suppressed by the glam and glitter of our media age and hijacked by the idolatry of private property (which the pope likens to the golden calf). With his joy and humility, Francis is trying to awaken us from our stupor, from what he calls “the globalization of indifference.”

Pope Francis appeals to us to reawaken our personal moral awareness. We know not what we do, he tells us, because:

Almost without being aware of it, we end up being incapable of feeling compassion at the outcry of the poor, weeping for other people’s pain, and feeling a need to help them, as though all of this were someone else’s responsibility and not our own. The culture of prosperity deadens us; we are thrilled if the market offers us something new to purchase. In the meantime all those lives stunted for lack of opportunity seem a mere spectacle; they fail to move us. (No. 54)

My own profession of economics has exemplified this deepening demoralization. In its quest for “scientific rigor,” mainstream economics long ago shed its traditional interest in a moral framework. A profession that started out as a field of moral inquiry had, by the 20th century, become a cheerleader for egoistic materialism, with little or no concern for moral inquiry. Human well-being, once a central interest of the moral philosophy of the classical economists, in the hands of 20th-century economists became virtually synonymous with one’s purchases and possessions.

There have been three disastrous consequences of the globalization of indifference. First, society at large, including the elites of finance and academia, abandoned interest in the fate of the poor or even came to blame the poor for their condition. Second, financial markets were deregulated, and market trade became the test of morality itself. Even as the major Wall Street banks peddled toxic assets to unsuspecting foreign buyers, thereby stoking a financial bubble that burst in 2008, the chief executive officer of Goldman Sachs declared that the firm was, after all, doing God’s work since it helped create wealth and jobs. Third, my own profession of economics aided and abetted this process by shedding its professional moral code as many rushed to lucrative jobs on Wall Street. The award-winning documentary movie “Inside Job” exposed an economics profession that had lost its moral compass.

The results are devastating. Income inequality in the United States is at the highest level in a century, if not more. Wall Street illegality and corruption nearly brought down the world economy. And at a time of unprecedented global wealth, impoverished people around the world have often been left to fend for their own survival against terrible odds.

Consider a recent shocking example. The Global Fund to Fight AIDS, Tuberculosis and Malaria is the world’s central institution to fund the fight against these three killer diseases. Through modern science, these diseases are treatable and often preventable. The Global Fund has saved millions of lives by dispensing medicines and preventive measures like anti-malaria bed nets. Yet when the Global Fund appealed for a replenishment of its funds this past year, asking $5 billion from the world’s governments and companies to tend to hundreds of millions of the world’s poorest people, it came up short, raising only $4 billion.

The shortfall of $1 billion will cost considerable death and suffering, as clinics run out of life-saving commodities. Yet this $1 billion is less than the paychecks of several hedge fund owners in 2013. It is less than one day’s Pentagon spending. It is less than $1 per year for each person in the high-income world. Why did the Global Fund come up short? There is only one reason, and no justification: the globalization of indifference.

A reinvigoration of a global economic moral code can be our lifeline in the 21st century. At a time when our societies are riven by unprecedented inequality, when six million children under the age of 5 worldwide could be saved each year from premature death and when reckless destruction of the earth’s environment puts the lives of humans and millions of other species in peril, it will be our attitudes, our moral judgments, that will be the most important determinant of our fate.

At this stage of history, humanity is at a crossroads, with the future course of our own choosing. We have the technical means to solve our national and global problems—to banish poverty, fight disease, protect the environment and train the illiterate and unskilled. But we can and will do so only if we care enough to mount the effort.

We face a moral crisis much more than a financial or economic crisis. And for this reason we must offer our gratitude to Pope Francis. He has lovingly reminded us that our highest aspirations really are within our grasp.

This article also appeared in print, under the headline “Market Reformer ,” in the March 24, 2014, issue.

Jeffrey D. Sachs is director of The Earth Institute, Quetelet Professor of Sustainable Development and Professor of Health Policy and Management at Columbia University in New York City. He is also special adviser to U.N. Secretary General Ban Ki-moon on the Millennium Development Goals and author of The End of Poverty (2005). His most recent book is To Move the World: JFK’s Quest for Peace (Random House, 2013).