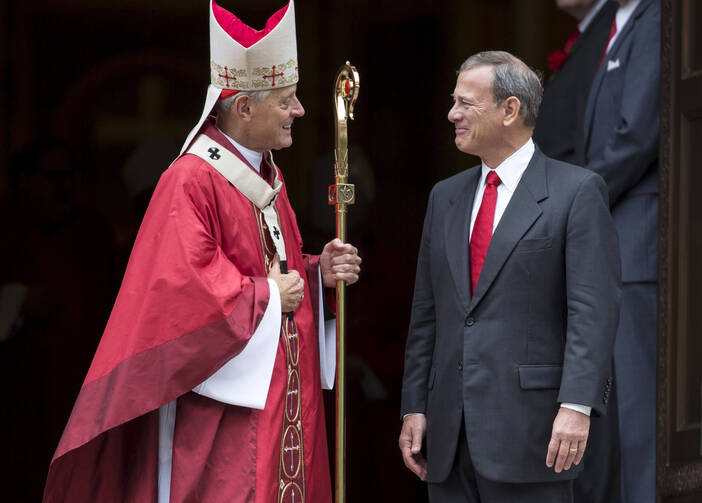 For the 63rd consecutive year, the nation’s political nobility assembled beneath the Romanesque dome of the Cathedral of St. Matthew the Apostle in Washington, D.C., for the liturgical rite that marks the start of a new term for the U.S. Supreme Court. Sponsored by the John Carroll Society, the Red Mass (known as such because the priests wear red vestments), is a rare moment when leaders of church and state gather as one to invoke the blessing of God on those responsible for the administration of justice.

The first Red Mass was held in Washington in 1953. In succeeding years, the congregation has frequently included the president, the chief justice, associate justices, other leading jurists and members of Congress.

This year, in what some lightheartedly referred to as another five-to-four decision, five members of the U.S. Supreme Court took their seats in the first pew: Chief Justice Roberts was joined by Justices Scalia, Thomas, Breyer and Kennedy.

Archbishop Wilton Gregory of Atlanta delivered the homily, telling the at-capacity congregation that their work must effect a “greater spirit of understanding and unity” and that “during the course of this coming year—whether you are a judge, legislator, agency official, or citizen—you will be faced with many perplexing issues that will demand your careful attention and discernment.”

That is an understatement. As Ellen K. Boegel recently wrote for America: “Potential blockbusters already are on the docket and others are in the pipeline. The court is scheduled to hear cases regarding the death penalty, redistricting, free speech, affirmative action, tribal court jurisdiction and state water rights. The court also may take on appeals related to abortion rights and religious exemptions to the Affordable Care Act and same-sex marriage.”

That docket is politically turbo-charged, especially in light of the fact that the U.S. Supreme Court in recent decades has assumed a more robust presence in our national politics than was originally envisioned by our founders. If Justice Antonin Scalia and I were legislators, we would rarely vote the same way. But I have a great deal more sympathy for Mr. Scalia as a jurist, mainly because he has called our attention to the fact that the current modus operandi of constitutional interpretation can subvert the democratic process. The U.S. Supreme Court, says Justice Scalia, has extended its prerogative well beyond the power “to say what the law is” to include the power to say what the law should be, a power formerly enjoyed exclusively by the legislative department of government. “To allow the policy question of same-sex marriage to be considered and resolved by a select, patrician, highly unrepresentative panel of nine,” Justice Scalia wrote in his dissent in Obergefell v. Hodges, “is to violate a principle even more fundamental than no taxation without representation: no social transformation without representation.”

Let me be clear: Both supporters and opponents of same-sex civil marriage should be concerned about how the matter was settled. As America’s editors wrote in a recent editorial: “There is a serious constitutional principle at stake: We the people must consider whether we want major public policy questions like the definition of civil marriage settled by judicial fiat, rather than by our elected representatives or by direct vote of the people.” We need to change this trajectory if we aspire to be a democracy in more than name. But in order to change the system, we first need the courage to say that the process is flawed. More important, we need the courage to admit as much even when, especially when the process produces an outcome we might personally favor.

Matt Malone, S.J.
@americaeditor
Show Comments (
2
)
Comments are automatically closed two weeks after an article's initial publication. See our comments policy for more.
Frank Bergen
6 years 1 month ago
In a society which I can imagine but in which we Americans do not live, our most basic controverted public policy issues would be discussed rather than debated. Our intent would be to find common ground rather than to win, to achieve the common good for the whole community, rather than victory for my side, unconditional surrender for the opposition. Sadly, in this country at this time we are unable to agree on some very basic issues: who should be able to live together with another person in a union recognized in the laws of states and nation as entitling a couple to take responsibility for one another’s health care, to inherit from one another, to equal treatment within our taxation system, and a myriad of other rights of married couples. From my perspective the situation of the same sex couple prior to SCOTUS’ Obergefell vs. Hodges decision was not fair, equitable, just. Realizing that for some among us a basic hostility to homosexuality and to gay persons is key to their opposition to same sex marriage, I believe that far more are influenced by our American tendency to conflate civil marriage and religious — sacramental in the Catholic tradition — matrimony. A conviction that only a union one’s faith community would recognize is a marriage has led and continues to lead many to oppose gay marriage, even after the Court’s decision. Given the inability of the people, the faith communities, the legislatures of the country to work together rather than against one another to reach common ground on the issue, and given that many people were affected by laws they felt to be unjust and unconstitutional, it is hard to imagine SCOTUS refusing to deal with the issue when presented cases crying out for resolution. Would it have been preferable for the issue of marriage equality to have been resolved through dialogue within society, involving the faith communities, all affected populations and ultimately the legislatures? Certainly. But was that dialogue underway and making progress while Obergefell was wending its way to the Court? And how long were those excluded from marriage to wait ‘patiently’?
Frank Bergen
6 years 1 month ago
Substituted corrected version below.