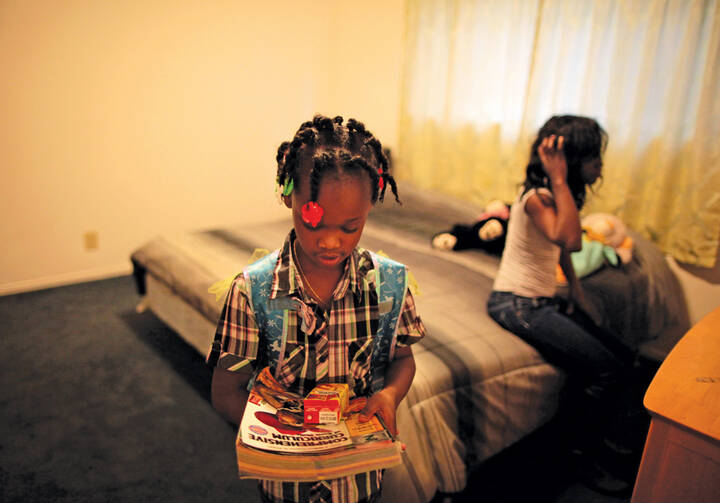 As a society we acknowledge that a college degree opens doors to higher paying jobs. So it is not surprising that a case before the U.S. Supreme Court concerning a Michigan law that prohibits using racial criteria in admissions for public universities is receiving wide attention. Americans may disagree about whether affirmative action is a legitimate way to correct historical wrongs or to promote diversity, but at least there is consensus that a person should not be excluded from higher education solely because of skin color or national origin. Yet today education remains a civil rights issue, though in a different sense. For children who are poor, the issue is not access to college. It is basic literacy.

In 1900, 11 percent of American adults were illiterate. Ten states, including New York and Pennsylvania, counted more than 300,000 illiterate people, according to the national census. Over the century, taxpayer-supported free education through high school prepared many for the skilled trades and shopkeeping jobs. Public schools expanded to offer college-preparation curricula. Private schools, supported in large part by donations, offered a parallel educational system—a form of consumer choice. Community colleges since the 1960s opened doors for high school graduates from every neighborhood. Today’s children, even those in poverty, have educational opportunities beyond the imagination of their peers a century ago. Teachers and parents today are the trustees of that inheritance as they disburse to each child a wealth of knowledge, analytical skills and effective communication methods, and encourage every child to participate fully in this legacy.

Not all children, however, receive the benefit of that inheritance. High dropout rates in many large city school districts make headlines. But recent studies reveal a more extensive scandal. The diplomas awarded to many high school graduates—those who have passed all the tests required by their local school districts—are worthless pieces of paper.

The Education Trust, a nonprofit organization concerned with the education of youth, reported on the results of tests administered by the U.S. Army to 350,000 high school graduates seeking enlistment between 2004 and 2009. As explained in “Shut Out of the Military,” a report published in 2010 by the Education Trust, the army tests aptitude in word knowledge, paragraph comprehension, arithmetic reasoning, mathematics knowledge, general science, mechanical comprehension, electronics information, auto and shop information and assembling objects. Twenty-three percent of the test-takers in this very large sample failed to achieve the minimum qualifying score for enlistment. These dismal results are not unique to a particular race, immigration status or region of the country. Failure rates among white high school graduates in Maryland, New Jersey, Rhode Island, Arizona and Hawaii, for example, all exceeded 20 percent. Many schools promote and graduate young people lacking the ability to qualify for basic jobs in the military—jobs that can provide specialized training and experience that can lead to solid civilian careers. Graduates who fail this test of literacy and technical aptitude are hardly prepared to take their place in civilian society. Not every student needs to attend a four-year university, but every student needs to train for a job that ultimately serves customers or clients.

The signs of failure are sometimes subtle. One public school district recently explained in a glossy annual report to the county taxpayers that two years hence it would require each student to demonstrate proficiency in 10th-grade algebra, English and civics in order to obtain a high school diploma. This new initiative was presented as the Board of Education’s insistence on a higher level of academic performance. But a sense of stewardship might lead taxpayers to rebel at financing the buildings, supplies, books, utilities and salaries for a 12-year education system when only 10 years of performance are required. Local employers no doubt wonder why they should hire high school graduates from this school district rather than from schools with higher standards. These students, to their lifelong detriment, are being deprived of their full inheritance. Parents who understand the subtle message are left to improvise ways to assure that their own children receive a decent education.

“Literacy for Everyday Life,” a study of adult literacy in 2003 by the U.S. Department of Education, shows the cumulative damage caused by such low expectations. In a sampling representative of the adult population in the United States, approximately 20 percent were unable to perform basic tasks involving printed material. Specifically, they had trouble completing a job application form, understanding written instructions and reading a basic health bulletin or apartment lease. They were unable to locate numbers and use them in simple operations like addition, even when the math information was very concrete and familiar. This 20 percent demonstrated, in the report’s terminology, “below basic” literacy skills. Some experts use the term “functionally illiterate” to describe this skill level.

The study showed a straightforward connection between literacy skills and household income. Most of the adults with “below basic” literacy (54 percent) lived in households with annual income less than $20,000. The poverty level in 2003 was $18,810 for a family of four. Meanwhile, higher literacy skills correlate to higher incomes. For adults demonstrating “intermediate” literacy skills, 63 percent lived in households with incomes greater than $40,000. Among adults with “proficient” literacy (the highest level), 65 percent enjoyed household income greater than $60,000. Lower literacy skills confine people to lower pay scales, but the more devastating impact of lower literacy skills is the inability to get work at any pay level. A staggering 50 percent of those with “below basic” literacy skills described themselves as not in the labor pool—with no job and no hope of a job—in a year when unemployment averaged 6 percent. The percentage of adults who described themselves as not in the labor pool is significantly lower at each higher level of literacy skill.

A study by the Pew Foundation in 2005 (three years before the Great Recession) found that 15 percent of American households had a zero or negative net worth. Household net worth is the sum of assets (house, cars, savings and checking account, stocks and mutual funds, retirement accounts, etc.) minus the sum of debts (mortgage balance, car loan, credit card debt, etc.). These households are at the lower end of the nation’s wealth gap. For those with low literacy skills, as the Department of Education study suggests, chances of securing stable, well-paid employment are slim indeed, even in a growing economy.

The correlations between literacy skills, employment prospects and income and wealth levels point to raising literacy skills as a necessary first step in addressing inequalities in civic participation, health, housing, incarceration rates and even life expectancy. The 20 percent of adults who demonstrate “below basic” literacy skills constitute a group in critical need of remedial services. Some of these adults may have had too little pre-school foundation, or school years interrupted by chaotic domestic situations. Perhaps school itself was a traumatic experience. Whatever the reasons for their current illiteracy, this condition is at the heart of their numerous disconnections from society.

People with weak reading skills are unable to participate effectively in our democracy. They are consigned to the 30-second television commercial or the robocall for information about election issues and candidates. They are unlikely to get jobs that require more than menial skills and even less likely to succeed in a small business—an avenue out of poverty for many. The wealth of information in libraries and on the Web is inaccessible. The rights afforded them in an apartment lease, credit card statement or employee benefits booklet are unintelligible. Considered in this light, adult literacy might appropriately be placed at the cornerstone of civil rights issues today. It should not only receive the attention of professionals in education, but should also be the focus of grass-roots efforts by ministers and college students, retirees or others—anyone with a few hours to give to an important cause. A citizenry alert to this issue might cooperate more intensely with teachers and administrators. Voters aware of the growing social costs of illiteracy might support larger education budgets and demand more accountability.

Helping today’s students achieve higher literacy skills at an early age is fundamental to building a better society. President Obama’s call for more pre-kindergarten opportunities acknowledges this reality. To implement it, some communities may need to shift already-scarce resources into this top-priority initiative. This redistribution may be painful for some, but it is prudent, since a child with poor reading skills is unlikely to be successful in upper grade levels. With those skills, a child has access to a lifetime of learning.

North Carolina is embarking on a radical experiment. The state’s education budget for 2013-14 increases the seats for pre-kindergarten programs and establishes vouchers for children in low-income households who choose to attend private schools. But the budget also cancels extra compensation previously paid to teachers who earned a master’s degree, eliminates teacher assistants in grade two and grade three and provides no salary increase for teachers who are already among the lowest paid in the country. Funding is increased to hire recent college graduates under the Teach for America program, but the budget also sets the stage for eliminating teacher tenure in 2018. In total, the state will spend $286 million less on education this year than last. Will these changes produce higher student achievement, especially in the critical area of literacy? In education, as in every area of social action, right moves bring good results and wrong moves cause real misery. No doubt the citizens of North Carolina will insist on timely measurement of results—and on changes as needed.

A century ago, when universal education was in its early stages, rural communities and cities marshaled their resources to build schools. Philanthropists helped pay for schools in areas with weak economies. Literacy efforts were supplemented by Andrew Carnegie, who donated the funds for 1,600 public libraries in the United States. Today, a child can carry all the volumes of those libraries in an iPad that weighs less than two pounds. Technology should make learning to read easier. Yet we are falling behind.

In 100 years, we have made progress against the prejudices of race, religion and national origin. One disenfranchised minority remains far behind, however: those with poor literacy skills. These deficits are at the heart of inequalities in income and wealth and of numerous other injustices. In the United States today, it might well be said, “If you want justice, work for literacy.”

Joseph J. Dunn is the author of After One Hundred Years: Corporate Profits, Wealth, and American Society (self-published, 2012), from which this article is adapted.