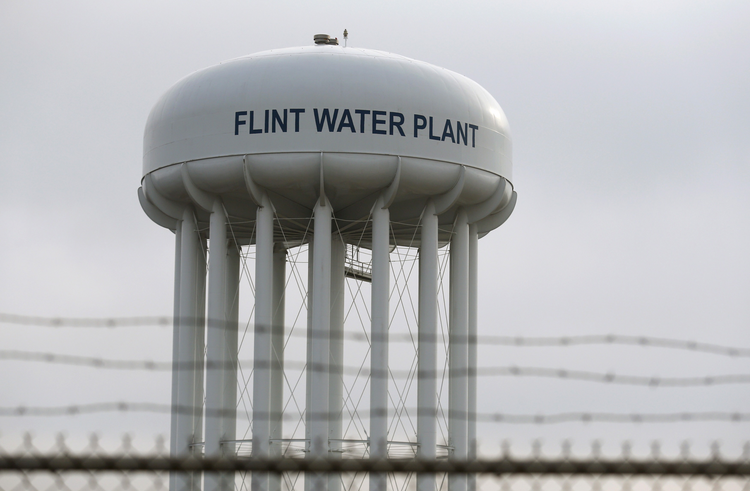 When the news revealed the drinking water in Flint, Michigan, was contaminated by lead, affecting roughly 100,000 people in the city and nearby areas, attention rightly focused on a staggering public health crisis.

However, the crisis may not be Flint's and Flint's alone. According to a report issued June 28 by the Natural Resources Defense Council, an estimated 18 million Americans are at risk of drinking lead-tainted water yet not know it.

One need not look further than Flint to see what the future could portend.

Months after the Flint water scandal broke, Catholic Charities of Shiawassee and Genesee Counties (the latter includes Flint and vicinity) continues to seek for water donations.

"Community members can do their part to provide relief by donating cases or gallons of water, water filters and replacement filters, cash or checks," says Catholic Charities' website. "If you would like to make a donation of bottled water, please note that we can only accept full cases of commercially packaged water or commercially sealed gallon containers of water."

Two Catholic Charities locations in Flint are pickup sites for water every weekday.

A Catholic church in Detroit, itself having seen tough financial times, asked Massgoers June 26 to contribute $3 to buy a case of water, with cases to be delivered to Flint. Earlier this year, the pastor and parishioners of St. Michael Byzantine Catholic Parish in Flushing, Michigan, partnered with Catholic Charities and other churches and organizations in helping Flint with immediate needs, through monetary donations, cases or gallons of water, water filtration kits, and replacement filters.

Even though state and city officials proclaimed in late June that filtered Flint water is safe to drink and use, one can understand the wariness of residents who have been subjected to foul-looking and foul-tasting water coming out of their taps since fall 2014.

The scandal has already brought indictments and the expectation of more, as well as calls for Michigan Gov. Rick Snyder to resign, as well as congressional hearings and demands that federal Environmental Protection Agency administrator Gina McCarthy resign.

By the Natural Resources Defense Council's calculations, there are 5,000 water systems in the country that could have tainted water, but either the EPA doesn't report it or the water utility never tells the EPA, according to Erik Olson, director of the council's health program. He made the remarks during a June 28 conference call with reporters on the study, "What's in Your Water: Beyond Flint."

The council, a New York-based environmental advocacy group, is a party to a lawsuit to get a federal court to order that Flint residents be provided safe drinking water. Other plaintiffs include Concerned Pastors for Social Action and the American Civil Liberties Union of Michigan. Defendants include state and city officials, including state appointed emergency managers of the fiscally troubled city.

Flint "doesn't even show up with lead violations in the federal government database that is supposed to show such problems," Olson said.

"There were more than a thousand water systems that serve 3.9 million people that showed lead levels at 15 parts per billion. That's the level that triggers action — or is supposed to, at least," he added, under the federal Safe Water Drinking Act.

Water utilities, according to Olson, can pull a variety of tricks to fool federal authorities about lead that would make a Volkswagen diesel engineer blush. They test at preselected taps, and not random taps as they are supposed to; they test at service lines they know do not have lead, which also is against the rules; they remove the faucets' aerators, which can allow lead to circulate more freely; they run the taps slowly, as turning taps on high also can dislodge lead; or they use collection bottles with narrow openings, which would require a slow-running tap to capture the water.

Kristi Pullen-Fedinick, a member of the Natural Resources Defense Council's health program, who assisted in the writing of the group's report, said utilities can be found in violation of federal water regulations one of three ways: health-based violations, when utility systems are not doing everything they're required to do to protect the public; the monitoring of violations, when they fail to monitor water for lead; and the reporting of violations, in which they fail to report lead or other contamination.

It can be a logistical and public relations headache for utilities to deal with lead issues, especially when there's no guarantee they'll have the funds to make the fixes, Olson acknowledged. Even though "we've known since Roman times that lead was dangerous," he added, the lead industry of a century or more ago convinced municipalities that lead was "a preferred material."

Olson and Pullen-Fedinick mentioned Pope Francis' 2015 encyclical "Laudato Si'" and its effect on moving the needle on how people think about the environment.

"I know there's certainly been a lot of emphasis on that in the climate context. I haven't heard the Holy Father's encyclical being cited in the water context," Olson said. "But there's been some change in views on lead service lines. I think that's a fairly recent thing. Maybe the encyclical expedited it. But 25 years ago there was no mention of it at all."

In "Laudato Si'" Pope Francis "addresses who we need to consider: the poor and the outcast. The issue that we're seeing with contamination is that it particularly falls on low-income communities or communities of color," Pullen-Fedinick said, adding the encyclical points out the need of "coming to that consensus and really trying to protect those most in need of protection."

Sen. Richard J. Durbin, D-Illinois, who joined the conference call briefly, said clean water is "a public health issue of the highest magnitude," adding he is co-sponsoring legislation to address the matter.