Gotta Sing! : The state of the American musical is strong. 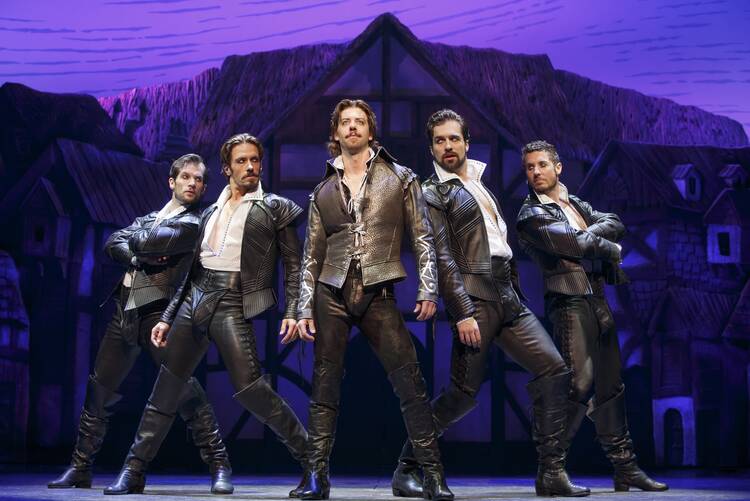 “Some people watch TV, we sing,” says Tanya, a middle-aged prostitute who’s part of the downbeat tableau vivant of Lisa D’Amour’s grittily sentimental new play Airline Highway, now on Broadway. Tanya is explaining to an outsider, a young high schooler from Atlanta, why her tribe of New Orleans motel residents occasionally breaks into lively group song, trading raps to the accompaniment of an overturned plastic drum.

The Big Easy might be one of the few remaining spots in the United States where the sight of people breaking into song wouldn’t raise an eyebrow. Another, of course, is New York’s commercial theater district, where the word “Broadway” is almost a synonym for “musical.” If jazz and the blues are America’s essential native musics, the Broadway musical is arguably our country’s great indigenous narrative form, with roots in minstrelsy, vaudeville and operetta. While its purported Golden Age was roughly between the 1930s and the ’50s, and its Dark Ages were the British-dominated 1980s of “Cats” and “Les Miserables,” the American musical is currently in the pink of health, if we measure by the current Broadway season (and it shows plenty of vital signs beyond Broadway, as well).

This is true whether we look at brand new musicals, at revivals, or at the odd, chimerical hybrid genre that seems to be a Broadway specialty of late, an original-ish work constructed from spare parts—a hit song catalogue, a popular Hollywood movie. The lauded new musical An American in Paris is a bit of both, grafting a new dance-oriented show onto the chassis of the 1951 film by Vincente Minnelli, and soldering it with tunes and concert music of George Gershwin. The show opens with a stark, gorgeous ballet set in post-World War II Paris, danced to the second movement of Gershwin’s Piano Concerto in F, and concludes with a lengthy, Balanchine-style ballet set to the lush, strutting Francophilia of the title tune. Director/choreographer Christopher Wheeldon and librettist Craig Lucas have largely succeeded in knitting together convincing excuses for their talented cast to sing and dance for two-plus hours, which is all such a property requires, though Lucas’s attempts at adding postwar gravity to the formulaic plot are often jarring, as when the strapping, square-jawed lead, Jerry Mulligan (Robert Fairchild), segues from describing a former troopmate’s splattered brains to a vow to fight for his right to love a lithe young French dancer (Leanne Cope).

Less fleet-footed is a new revival of Gigi, Alan Jay Lerner and Frederick Loewe’s sly, frothy musical about a young girl’s coming of age in Belle Epoque Paris, which began as a lavish MGM film musical in 1958 and was later adapted for the stage. Much has been made of the surgical revisions by the writer Heidi Thomas, who, among other things, has taken the tune “Thank Heaven for Little Girls” out of the mouth of an old lecher and given it to the two women who are grooming their young charge, Gigi, for life as a high-end courtesan. But far more damaging to the work’s already wispy charms is the way it’s been tailored to the limited stage talents and one-note charisma of Vanessa Hudgens, of “High School Musical” fame. The name of Disney is too often invoked as a pejorative to denote robotic, faux-naif vapidity, but the shoe fits here.

The choreography in “Gigi” has a certain snap and flair, but its choreographer, Joshua Bergasse, has done much better work as choreographer of the season’s best show, new or old, musical or otherwise: an all-stops-out revival of On the Town, the sassy romp that Leonard Bernstein, Adolph Green and Betty Comden churned out in 1944, directed here by John Rando. For starters, few musicals of any era still sound as fresh and vivid as Bernstein’s score, and though the script is little more than a sexy farce about three young sailors looking for dates on shore leave in Manhattan, it’s a sturdy, uncynical contraption that moves the piece along seamlessly from song to dance and back. It’s glorious, and as good a defense of Broadway musical comedy as an art form unto itself as I’ve ever seen.

There’s a countervailing American musical tradition, though it’s often thought of as the mainstream: the earnest mid-century classics of Rodgers & Hammerstein, which owe a bit more to European models of operetta, not to mention the well-made play, than they do to vaudeville and song-and-dance. Few shows of theirs demonstrate both their strengths and their weaknesses more clearly than The King and I, the 1951 musical drama about an English schoolteacher in 19th-century Thailand, which is now in a sumptuous Lincoln Center Theater revival, directed by Bartlett Sher and starring Kelli O’Hara and Ken Watanabe. On the plus side, it has a melodious Rodgers score and strong, compelling characters at its center; on the debit side, its midcentury liberal ideas about race and culture, though well-intentioned, don’t amount to much more than West-knows-best moralizing. While O’Hara and Sher last breathed bracing new life and subtlety into Rodgers & Hammerstein’s “South Pacific,” another tale of an East-West clash, their work on “The King and I” is subdued to the point of somnolence, as if by soft-pedaling the show’s conflicts it might seem less offensive.

To give credit where it’s due, we have the tradition of the self-serious American musical to thank for Stephen Sondheim, a pupil of Hammerstein’s who took away from his mentor the lesson that a musical should not only have something to say, but that it could be about anything and take nearly any form. Sondheim’s heirs include the fiercely empathetic composer Jeanine Tesori, whose new musical with Lisa Kron, Fun Home, is an adaptation of Alison Bechdel’s popular graphic novel of the same name. Previously represented on Broadway by “Violet” and “Caroline, or Change,” Tesori has the kind of free-ranging musical style that can trace unlikely, often ambivalent emotions and set them quivering in the theatrical space between us and the actors, and it serves her well here with the wrenching, complicated tale of Bechdel’s childhood and young adulthood as a lesbian with a closeted gay father. Staged in the round by Sam Gold, it’s an almost unbearably intimate show about hard choices, but it’s been conceived with love, and it lifts our spirit even as it wrenches our emotions. Music can do that.

Music can also tease and tickle, of course, and that’s where the season’s other great new musical, Something Rotten!, comes in. This eager-to-please comedy about two playmaking brothers in Elizabethan England who invent musical theater as a way to compete with their chief rival, Will Shakespeare, is in the indefensibly silly tradition of “The Producers” and “Spamalot,” only it’s more consistently entertaining than either. Unlike “The Book of Mormon,” with which it’s been compared, “Something Rotten!” has very little on its mind apart from coming up with stupidly clever—or is it cleverly stupid?—ways to keep us laughing. Miraculously, it does. The product of two Nashville songwriting brothers (Karey and Wayne Kirkpatrick), a British writer (John O’Farrell) and, just as important, director/choreographer Casey Nicholaw (who in addition to choreographing both “Spamalot’ and “Mormon” is behind the bumptious “Aladdin”), “Something Rotten!” is the kind of show about which it’s often said, “They don’t make ’em like that anymore.” Well, yes, they do.