GOAL!!: Let the World Cup be a celebration of solidarity and peace, pope says 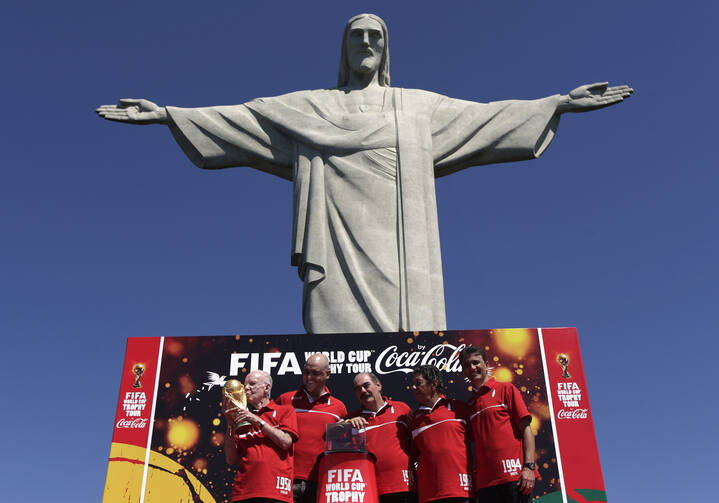 As the World Cup was about to kick off, Pope Francis called on fans and competitors to celebrate the event as an opportunity to promote dialogue, respect and peace.

He also warned against all forms of discrimination on the sidelines, in the stands and on the field: "Let no one become isolated and feel excluded! Watch out! 'No' to segregation, 'no' to racism!"

The pope made his comments in Portuguese in a video message aired on Brazilian television on June 11, the eve of the start of the world soccer championship in Brazil that runs until the final match on July 13.

"It is with great joy," the pope said, that he could greet all "soccer lovers," organizers, players, coaches and fans who will be following the matches on television, radio and the Internet.

The World Cup "overcomes linguistic, cultural and national barriers," said the pope, a lifelong soccer fan who actively rooted for the San Lorenzo team in his native Buenos Aires, Argentina.

He asked that the monthlong event unfold with "serenity and tranquility, always with mutual respect, solidarity and fraternity among men and women who see themselves as members of one family."

The pope said that sports show how to build a more peaceful and harmonious world through important values such as loyalty, perseverance, friendship, sharing and solidarity.

The three most important lessons sports teach, he said, "are the need to train, (the sense of) fair play, and respect for one's adversary."

Sports show how important intense and consistent training and sacrifice are for becoming better, the pope said. If people are to be more open and peaceful, it will require the same kind of investment in time and effort.

The idea of fair play helps people "overcome individualism, egoism, all forms of racism, intolerance and exploitation," he said.

A culture of every-man-for-himself, he said, "represents an obstacle to a team's success in soccer" and in life, as ignoring or neglecting others hurts society.

Lastly, "the secret of victory on the field and also in life lies in knowing how to respect my teammate and my adversary. Nobody wins on his own, neither on the pitch nor in life," he said.

The pope called for an end to intolerance, discrimination and racism so that everyone could walk away a winner.

Given that "at the end of these world (championships), only one national squad can raise the cup high as victors, learning the lessons that sport teaches us will make us all winners, strengthening the bonds that unite us," he said.