A Global Peril: The state of religious freedom today 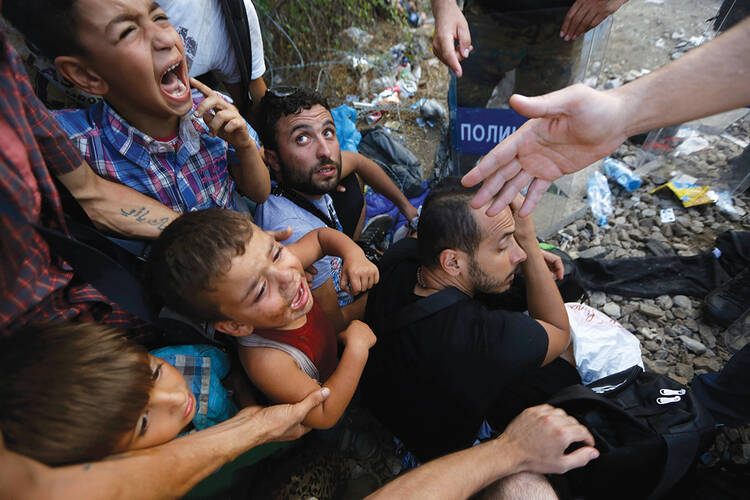 The status of religious freedom in the world is not something to celebrate these days. The situation in the Middle East remains dire. Hundreds of thousands of people have been displaced, and religious minorities are being persecuted and slaughtered. But this sad state of affairs is not unique or limited to that region. South Asia has recently seen a disturbing increase of sectarian violence against Christians and Muslims. Together the Middle East and South Asia are home to most of the major religious traditions of the planet. Not surprisingly, they are also home to many of the violations against religious freedom.

“Freedom of thought, conscience and religion” is guaranteed as a human right in Article 18 of the Universal Declaration of Human Rights, to which most countries of the world have bound themselves by treaty and international law. Nevertheless, the sad fact is that abuses against freedom of religion are probably the most widespread and varied of all abuses. Issues involving the freedom of religion vary from the requirements of the Affordable Care Act in the United States to the genocidal tactics of ISIS in Syria and Iraq. They run the gamut from the legal to the existential.

In evaluating the status of religious freedom in the world there are, on the one hand, almost more resources than one can handle. The U.N. special rapporteur for freedom of religion or belief regularly reports to the U.N. secretary general on the status of freedom of religion. The Pew Research Center also reports on restrictions and hostilities toward religion on the level of governments and society. Its last report, “Latest Trends in Religious Restrictions and Hostilities,” appeared in February 2015. The European Parliament Intergroup on Freedom of Religion or Belief and Religious Tolerance published its latest annual report, subtitled “The State of Freedom of Religion or Belief in the World,” in June 2015.

While these studies are crucial to understanding the situation of religious freedom in the world, events outrun the official reports, which are always at least one year out of date. By monitoring the news throughout the world, an interested reader has no trouble keeping up to date with a steady stream of almost daily reports about the persecution of one or another religious group.

The emergence of ISIS in Syria and Iraq in June 2014 added to the misery of religious minorities already under great strain from the breakdown of society in Iraq and the civil war in Syria. The plight of Christians in the Middle East has received considerable coverage in the media in the past two years. Groups have been formed to defend and protect Christians and to accept (in some cases exclusively) Christian refugees. Thus, for most people in the Western world, the plight of Christians is relatively well known and documented.

We often hear that Christians are “the most persecuted religious group in the world.” To some extent that is true, largely because Christians are the largest and most geographically dispersed of all the world’s religions. Demographically, Christians offer the most convenient “targets of opportunity” for those who would abuse freedom of religion.

The Middle East deservedly receives a great deal of media coverage over persecution of religious minorities, as some of the most egregious violators of freedom of religion are found there. The group Open Doors sees Iraq, Syria and Iran as among the nine countries in the world where Christians are enduring “extreme persecution.” The European Intergroup on Freedom of Religion or Belief notes: “The Kingdom of Saudi Arabia is one of the worst violators of FoRB in the world. The degree to which the country restricts the right of freedom of religion or belief other than Sunni Islam is unique and extreme even by the standards of other violators.”

But abuses against freedom of religion and religious minorities are not restricted to the Middle East. Ever since it achieved independence in 1947, India has experienced sectarian tensions and outbreaks of violence. Tensions between Hindus and Muslims resulted in the creation of Pakistan (and later Bangladesh), but especially in northern India there have still been clashes between Hindus and Muslims and, to a lesser extent, Sikhs for decades.

Recently, there has been a disturbing increase of sectarian violence throughout India. Narendra Modi, who was elected prime minister in 2014, is a member of the Bharatiya Janata Party and also a member of the Rashtriya Swayamsevak Sangh, a right-wing Hindu nationalist movement that has been at times involved in sectarian violence. Some Hindu extremists—including members of the B.J.P.—have initiated ghar vapsi, or “homecoming,” supposedly to convert Indian Christians and Muslims “back home” to Hinduism. Monetary rewards have been offered for converting a Christian or a Muslim to Hinduism.

As reported in Christianity Today, the Evangelical Fellowship of India documented 600 violent attacks against Muslims and Christians in India in the 300 days from May 2014 (when Prime Minister Modi took office) through March 2015. Christian churches have been attacked and burned. Christians have been beaten or killed. In March 2015, a 74-year-old nun was assaulted and raped in Ranaghat, West Bengal, during an attack on the Convent of Jesus and Mary School.

Few, if any, of the attacks on Muslims or Christians have resulted in arrests, much less convictions, under the present government. Akanksha Narain of the S. Rajaratnam School of International Studies has sharply criticized the Modi government for its silence when faced with sectarian violence. It does not seem that the sectarian violence in India is going to abate soon.

Few people in the West have heard of the Rohingya. They are a Muslim ethnic group that has lived for over 1,000 years in the northwest of what is now Myanmar (Burma). Although they have been living in that area since about the eighth century, they are not accepted as citizens by the Myanmar government. Denied the rights and protections of citizenship, the Rohingya have been described as “the most persecuted people on earth,” according to a report last year in The Economist. As many as 140,000 refugees have been interned in refugee camps in Myanmar.

In a situation eerily similar to that in Europe, Rohingya refugees are flooding Bangladesh, Thailand and Malaysia, where they often receive a very cold welcome. The government in Myanmar has offered the Rohingya citizenship on the condition that they renounce Islam and accept Buddhism, the religion of the majority in that nation. Understandably, few of the Rohingya have been willing to do this. As a result, almost 1.3 million Rohingya live a precarious existence in Myanmar, disenfranchised and persecuted in their own country, not welcomed by neighboring countries and, for the most part, unknown to the rest of the world.

The situation in the Middle East and these two examples, one from the largest democracy in the world and one from a relatively unknown group that is threatened with extinction, indicate that the status of religious freedom in the world at the start of 2016 is not good. Discrimination and outright persecution are fairly widespread. The Pew Research Center report shows that religious minorities continue to suffer for their faith. There is a further note, however, that is disturbing but which might point to a possible solution.

Although there are no “pure” conflicts (i.e., purely religious, purely ethnic, purely political, etc.) and there are inevitably many forces that play primary or secondary roles in conflicts, the presence of sectarian violence is deeply disturbing. And although there are countries that profess to be atheist and that—sometimes violently—discourage religion, most of the countries where freedom of religion is abused have some type of “religious marker” in their self-identity. All too often the conflict is between two or more groups who self-identify religiously. In parts of the Middle East, it is Muslims against Christians, Yazidis, Mandaeans and others. In other parts of the region, it is Sunnis against Shiites, Ahmadiyyah and Zaidis. In India, is has been Hindus against Muslims and Christians. In Myanmar, it is Buddhists against Muslims. Not long ago, it was Catholics against Protestants in Northern Ireland and Orthodox against Orthodox in Ukraine.

This is not to say that religion is the sole source of the problem. It is, however, to recognize that in far too many places religion is at least part of the problem. Patterns exist around the world that simply cannot be ignored—or are ignored at our own peril. Twenty-five years ago the Swiss priest-theologian Hans Küng gave a lecture at the University of California in San Diego titled “No Peace Among Nations Until Peace Among Religions.” The sad status of freedom of religion in the world and especially for religious minorities is not something that can be improved by some magic formula. Nevertheless, Professor Küng’s point is very important. All believers need to recognize how our own traditions have helped fuel conflicts. Each of our traditions has been at one time or another not only a victim but a victimizer. We then need to work courageously within and between our traditions to build a world in which freedom of religion is not merely an idea but a reality.

Elias D. Mallon, S.A., is external affairs officer for Catholic Near East Welfare. He has been involved with nongovernmental organizations at the United Nations since 2006 and with the Christian-Muslim Dialogue since the 1980s. Funding for the issue in which this article appeared was provided by a grant from the Catholic Communication Campaign. The opinion of the author is his own and does not reflect the opinion of the CCC.

Show Comments (
2
)
Comments are automatically closed two weeks after an article's initial publication. See our comments policy for more.
Tom Fields
6 years 7 months ago
What about the state of religious freedom in America? Christians are forced to accept abortion---homosexual marriage, high taxes, and general hatred and disrespect! Those who hate freedom of religion are similar-- throughout the world and throughout history! God help us!
Gabriel Marcella
6 years 7 months ago
The editors of America must have debated the pros and cons of an article on religious freedom in our own country and probably decided not to include it. This is troubling because there is no question that our freedom is under attack. Until we understand the situation in our society and what it takes to defend that freedom we are less qualified to advance it in other countries.