Skip to main content
Signs Of the Times
November 2, 2015 issue

Francis Calls for Decentralization And ‘Conversion’ of the Papacy

Francis Calls for Decentralization And ‘Conversion’ of the Papacy 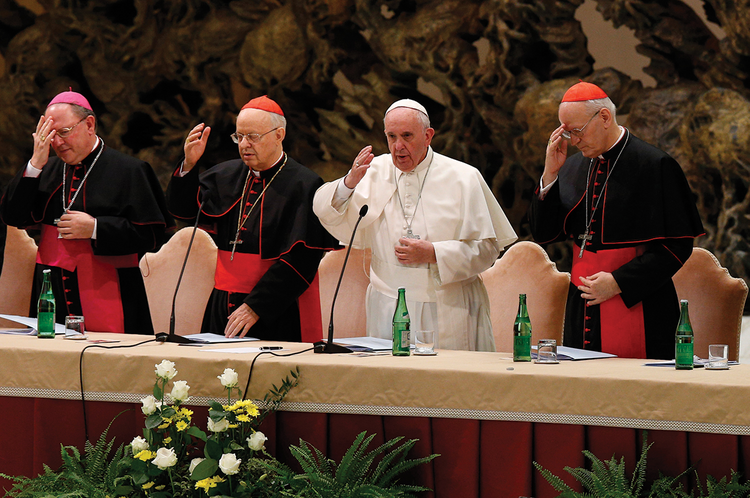 In his address to the synod on Oct. 17, Pope Francis emphasized the need to give new life to structures of synodality in the local churches worldwide. He confirmed his intention to promote greater “decentralization” in the church and to bring about “a conversion of the papacy.” Pope Francis began by recalling that ever since he became Bishop of Rome, “I wanted to give value to the synod, which constitutes one of the most precious inheritances of the last council gathering.”

“The way of synodality is the way that God wants for the church of the third millennium,” Francis declared. He explained that what Jesus is asking of the church today “is all contained in the word ‘synod,’” which means “walking together—laity, pastors, the Bishop of Rome.” This is an easy concept, but it’s one that’s difficult to put into practice, he admitted.

He recalled that the Second Vatican Council had reaffirmed that “the People of God is constituted by all the baptized” and that “the entire people cannot err in believing.” Then, in a statement that has far-reaching implications, Francis declared that “the sense of faith impedes the rigid separation between the Teaching Church and the Learning Church because the flock possesses its own ‘sense’ to discern the new roads that the Lord reveals to the church.” He revealed that it was this conviction that led him to hold the consultations in churches worldwide before the 2014 and 2015 synods because it was not possible to speak about the family without talking to families.

“A synodal church is a listening church, [one that is] aware that listening is more than hearing. It’s a mutual listening in which each one has something to learn,” he said.

The pope’s talk was offered on the 50th anniversary of the establishment of the synod of bishops even as controversy persisted about the process followed at this particular synod. In an interview with America on Oct. 18, Cardinal Donald Wuerl of Washington flatly denied allegations by some of his fellow cardinals and bishops that the fathers attending the synod were “somehow” being manipulated by the pope and the synod structure that Francis approved.

“I wonder if some of these people who are speaking, sometimes surreptitiously, sometimes half-way implying, then backing off and then twisting around, I wonder if it is really that they find they just don’t like this pope,” he said. He suggested these charges may have already “tainted” the synod process in the public eye and so cast a cloud over its outcome.

“I thought the pope’s speech…focused exactly on where we need to be,” Cardinal Wuerl said. “The church ‘with and under Peter’ moves forward. There are always people who are unhappy with something that is going on in the church, but the touchstone of authentic Catholicism is adherence to the teaching of the pope.”

Cardinal Wuerl has a long experience of synods, having attended seven as a bishop and having served as general rapporteur at one. He insisted that he hasn’t seen even the slightest hint of manipulation at this synod. On the contrary, he says, the bishops have greater freedom than ever before to speak their minds.

“Now there are some bishops whose position is that we shouldn’t be discussing any of this anyway,” he said. “They were the ones at the last synod that were giving interviews and denouncing and claiming there were intrigues and manipulation. That, I think, falls on them. I don’t see it with a foundation in reality.”

This article also appeared in print, under the headline “Francis Calls for Decentralization And ‘Conversion’ of the Papacy,” in the November 2, 2015, issue.