A Force to Be Reckoned With: Mercy, sin and ‘Star Wars’ 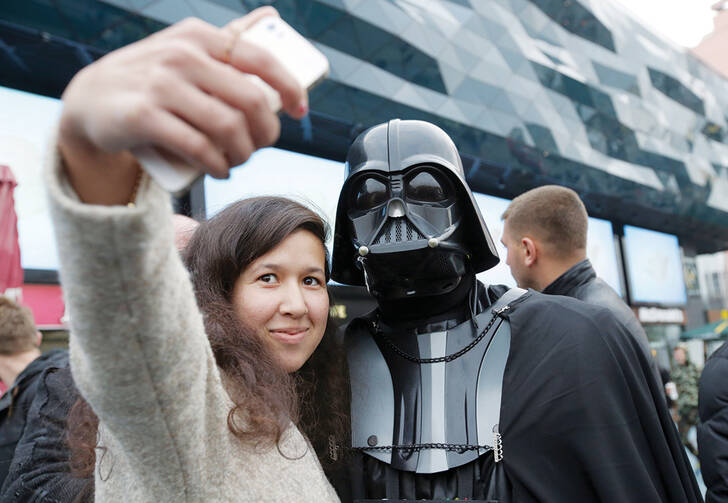 I am not sure any movie has ever had a more shocking ending for me than “The Empire Strikes Back,” part two of the original “Star Wars” trilogy. In it, hero Luke Skywalker has his hand cut off by asthmatic mass murderer Darth Vader, who then says he is Luke’s father. Meanwhile, our other hero, Han Solo, is flash frozen in carbonite and spirited away, perhaps forever. The End.

I was ten years old when “Empire” came out, and I hated it. How was I expected to wait three years to find out what happened? But today “Empire” is by far my favorite “Star Wars” film. (I’m middle aged; of course I like things that conclude in tragedy and loose ends.) But it is the series as a whole that keeps me coming back, and will continue to with the upcoming Episode VII “The Force Awakens.” Within its fanciful stories of wars in distant, long-ago galaxies I still find lessons of faith, sin and redemption.

There is a passing moment halfway through the original “Star Wars” in which Luke is trying to learn how to “feel the Force,” the energy that binds all living things together. And he is having absolutely no luck. Then his mentor Ben Kenobi tells him to put down his helmet’s blast shield, which renders Luke unable to see anything. Not exactly the smartest strategy when you’re trying to keep from getting shot. Of course it works. With the blast shield down, Luke becomes more able to feel the Force and react.

The point of this tale is one that all six “Star Wars” films return to again and again: our senses can be a great distraction. The world around us constantly demands our attention. Figuring out how to proceed amidst its many demands requires us from time to time to step back and listen instead for what is going on underneath. It is counterintuitive, but it’s true.

Most fans of the original “Star Wars” trilogy would just as rather we forgot there had ever been a second. Set 30 years earlier, Episodes I through III are a cacophanous mess of C.G.I. and tin-eared dialogue. But the movie poster for Episode I has always fascinated me. A little boy with a backpack walks away from us through a desert. He appears totally ordinary, but his shadow is that of the man he will become Darth Vader.

How does a person “go bad”? It is another fundamental question of the “Star Wars” saga. The answer is pretty simple: We become afraid. Yoda offers a sort of mathematical formula: “Fear leads to anger. Anger leads to hate. Hate leads to suffering.”

But in “Star Wars,” as in life, fear is also unavoidable. All that we can control is our reaction to it. Sin is not being afraid, or angry or desperate; it is what we do as a result of feeling that way. It is how we try and end our discomfort. In “Empire,” Luke repeatedly gives up on training exercises because they are painful. In the prequel trilogy Anakin murders a whole village to try to alleviate the grief he feels over the death of his mother. Later he goes full Darth because he cannot stand the thought that his wife might die.

There are so many insightful definitions of sin; many of them circle some kind of selfishness, what theologian James Keenan, S.J., calls “a failure to bother to love.” For me, the reminder of “Star Wars” is how sin can also be a reaction to desperation. It is the stuff we are willing to do when we’re trying to stop being in pain.

‘I Know There Is Good in You’

Luke’s mentors, Ben Kenobi and Yoda, are classic wisdom figures—they teach Luke how to do cool stuff like levitate objects and fight with laser swords. But more than that they teach him about being a human being—how acting out of rage or fear will almost certainly get you into trouble; that oftentimes the greatest obstacle to doing good is your own refusal to accept that it is possible, and that the monster you most fear is almost certainly yourself.

But as wise as they are presented, on the most important point of all, Kenobi and Yoda are absolutely wrong. For them, Darth Vader is an enemy to be destroyed. Their long friendship with him has been wiped away by all the horrible things that he has done. There is nothing now but an evil that must be eradicated, they say. But Luke refuses to go down that road. Indeed, not only will he not kill his father, he will not believe that Vader cannot be brought back into the light.

Our society tends to think of mercy in sweet terms: a Hallmark card, Jesus surrounded by lambs and/or children. What I love about “Star Wars” is how it insists that real mercy is an act of radical defiance. It is a choice that goes against the grain, that doesn’t make a lot of sense, can even appear gratuitous or downright dangerous. And at the same time, mercy is the path by which the hero becomes his fullest self. In the case of Luke, what finally makes him a Jedi Knight is not the battles he wins, but the fact that instead of pursuing his cause he chooses to try and save Vader from himself.

When first we encounter the black visage of Darth Vader, it is a mask meant to terrify us, an emblem along with his wheezy mechanized breathing of Vader’s fundamental inhumanity. But over the course of the original “Star Wars” films we discover that Vader’s armor is not a mask as much as it is a prison. It is the life-support system that hides the horrific scars of his own actions. And that’s the nature of sin: It is a prison that we build for ourselves and that, ultimately, we don’t know how to escape. Indeed, we may not think we deserve to. As Vader tells Luke at the end of “Return of the Jedi,” “It’s too late for me, son.”

But the enduring message of “Star Wars,” a fitting insight as we begin the Year of Mercy, is that in fact it is never too late, that there is still good inside all of us, no matter what we have done. We need only close our eyes, close out those distractions and take the hand that is extended to us.