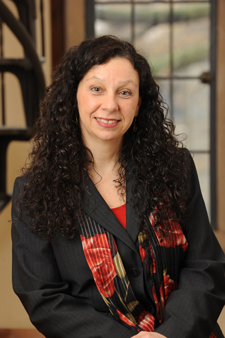 On a sunny Saturday morning not long ago, I set out early for Woodlawn Cemetery in the Bronx. This may seem an odd way to spend one’s day off, but, truth be told, I find cemeteries strangely consoling. Perhaps this comes of being raised Catholic, taught from early on that the dead do not stay dead, which makes the cemetery a pleasant stop along the road to eternity.

It also comes of my childhood memories associated with the graveyard. Every Sunday, my mother would drive our family to St. Mary’s Cemetery to visit the graves of our grandmother and our father. My grandfather, an Italian immigrant with a passion for gardening, would labor around the big family stone, mulching the soil, planting geraniums, pruning the roses and evergreens. My little brother and I would fill the metal watering can from one of the spigots that studded the cemetery road, tote it back to the grave and water the thirsty plants. This was our contribution to the business of caring for the dead. It made us feel necessary and useful. Afterward we would wander among the tombstones, reading the names of strangers and inventing stories about them. Occasionally, we would run races, choosing a prominent stone as “home,” a safe haven that protected us from the invisible “It” we imagined pursuing us. Even the word graveyard suggested the place’s paradox. For us, St. Mary’s was a space for serious play, a proving ground where we tested the limits of human life and faced the brute fact of mortality.

My reason for heading to Woodlawn this past Saturday was not to visit family, but to see a friend—Herman Melville. It might seem presumptuous to regard a celebrated 19th-century American novelist so familiarly, but reading a great writer across the decades is a means of conducting conversation with him and, inevitably, leads to intimacy. As a long-time English professor, I have taught Melville’s masterpiece, Moby-Dick, to thousands of students, (re)read it some 50 times and written a score of poems and a play inspired by the book. Its language and rhythms are inscribed in my mind, carved in my heart, and have formed my imagination.

Melville’s mighty book shares a key quality with the work of our finest American Catholic writers, including Flannery O’Connor: it is God-haunted. Melville’s infamous Ahab is a man in search of meaning. His rage is the rage of every human being who has felt wronged by God, and his revenge is both heretical and heroic. Here I think of O’Connor’s character Ruby Turpin, in the short story “Revelation.” As she enacts the evening ritual of hosing down her prize hogs, Mrs. Turpin challenges God for a perceived insult she has suffered, bellowing at last, “Who do you think you are?” O’Connor once said of Ruby, “You got to be a very big woman to shout at the Lord across a hogpen.” Ahab too is larger than life and does his share of shouting. His quarrel with God is Melville’s as surely as Ruby’s is O’Connor’s, all four demanding enlightenment in language as grand as it is ungodly.

It seems fitting to visit a God-haunted man in a God-haunted place, and, happily, I was accompanied in my graveyard pilgrimage by some fellow friends of Melville. As we wended our way among the rows of stones, I was struck by the similarities among my three companions: all are fiction writers, all are authors of historical novels (a genre dedicated to the resurrection of the past), and all are Irish Catholics. As a poet, an avid reader rather than writer of novels and an Italian Catholic, I was the odd woman out. Yet our common reverence for the ties that bind us to the dead and our (un)common devotion to Melville’s work made a community of us that morning. Our visit was ritual homage to a mortal man whose words had achieved immortality, fulfilling the deepest desire of every writer.

At last we reached the graveside. Each of us had brought a small token and placed it beside the offerings made by previous pilgrims. At the behest of my friends, I recited a poem I had written after my first visit to his grave, “St. Melville.” (This was my adult version of emptying the metal watering can. I felt necessary and useful.) Then we said our farewells, bowed in deference to our friend and parted company, making our way back to our lives—and to our words—awaiting us beyond the graveyard gates.

Angela Alaimo O’Donnell is a poet, professor and associate director of the Curran Center for American Catholic Studies at Fordham University, New York.