A Dreamy 'Awakening' : A ‘deaf musical’ on Broadway 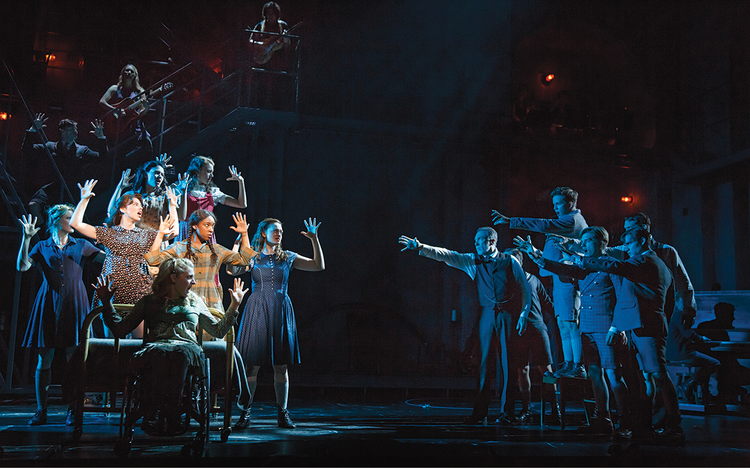 The term “deaf musical” may sound like an especially odd oxymoron, but for those who have been paying attention, it has become something of a miraculous hybrid art form unto itself, developed over the past 15 years by the small Los Angeles company Deaf West Theatre. In their groundbreaking staging of the Huck Finn musical “Big River” in 2001, which made its way triumphantly to Broadway in 2003, a mixed cast of deaf and hearing performers fused sign language and song into an utterly convincing whole. When Huck and Jim sang and signed the bittersweet waltz “Worlds Apart,” the audiological divide subtly but unmistakably overlaid and complemented the tale’s original racial one.

With its new staging of Spring Awakening on Broadway, Deaf West has conjured this unique alchemy again and applied it to a story with communication breakdowns at its pulsing heart. The 2006 musical is based on Frank Wedekind’s 1891 German play, a work often banned or censored for its sexual frankness and its withering attack on what Wedekind diagnosed as the hypocritical, soul-crushing mores of his day. At its dramatic crux is the tragic ignorance of a young teenage girl, Wendla (here played sunnily by Sandra Mae Frank), about sex, which of course leaves her vulnerable to its consequences. These come chiefly at the hands of the swaggering Melchior (Austin P. McKenzie), one of the more precociously worldly and confident of the show’s many hormone-addled teen boys. In the new production, poor Wendla is at an extra disadvantage. She is deaf, and though she has a guitar-slinging avatar (Katie Boeck) to voice her lines and songs, the characters in her life who possess the information she desperately needs about the birds and the bees—her mother (Camryn Manheim), for one, but also Melchior—are able to hear, and their failure to speak the plain truth to her, despite their professed love, has an added sting in this telling.

Deafness also compounds the plight of Melchior’s other lost friend, Moritz (Daniel Durant), whose failure in his studies is engineered by disapproving teachers who do not like his attitude. This injustice is painfully amplified in the Broadway staging as it becomes clear that Moritz, on top of any native deficiencies or distractions, is also forbidden from using sign language in class. Good thing he has a spiky-haired, Billie Joe Armstrong-esque double around (Alex Boniello) to voice his inner torment.

Throughout, Michael Arden’s direction swirls relentlessly around a set resembling an old church under renovation, with tall scaffolding in front of sconce-like niches and the show’s chamber-rock band variously perched or roving the perimeter. As with previous Deaf West musicals, Spencer Liff’s choreography unleashes the full-body theatricality of sign language in a series of sinuous and stunning tableaux. This chimerical movement-and-sound stage language proves remarkably simpatico with the two basic registers of Duncan Sheik and Steven Sater’s score, pop-punk and swoony ballad.

But if this “Spring Awakening” does not feel like a home run, it is not because of an inherent mismatch between the material and the telling. There are simply too many layers here, and the result is a lovely muddle. The central conceit of Sheik and Sater’s musical, and Michael Mayer’s original staging, was its sharp contrast between the britches-and-skirts antiquity of the original setting and the colloquial teen emo of the score. There were essentially two realities and modes of speech, with conjugated Latin in one and lyrics like “we’ve all got our junk” in the other, and that frisson was the show’s main selling point.

Here that contrast is considerably blurred, as the entire show takes place in an unreal, heightened stage world. Characters change costumes onstage, deaf actors acknowledge their singing counterparts, set pieces come and go, actors prowl the catwalks and gather in Greek-chorus-like communion around even intimate scenes. Though this gives nearly the entire show the feeling of a dream and lends many of the musical numbers a hypnotic power, there is a danger in too much mesmerism, particularly with songs that function more as internal monologues and dialogues than as story-advancing scenes. There are a lot of unmoored, free-floating feelings on offer, in other words, and not enough of them stick.

Some of the most affecting moments, then, are tiny gestures that stand out against the general onslaught. There is a hauntingly silent scene of intense discord between Moritz and his father, played by the deaf actor Russell Harvard, that is later punctuated by the father’s open weeping at Moritz’s death—one of the few moments in which the show’s mostly cartoonishly stern adults are allowed a shred of humanity. There is also the shattering image of Moritz straightening his hair and tie just before aiming a gun at his temple, as if putting on his best face for the next world.

But the net effect of this otherworldly “Spring Awakening” is that of a well-sung, extravagantly produced concert version; it moves plenty but fails to move us. This emotional deficit does not do the material any favors. If Wedekind’s original play was a blistering critique of establishment mores and the musical version a kind of ironic pop-punk commentary on the similarities between then and now, this new production might be snarkily summed up as a two-hour commercial for sex education—now with sign language! That is not fair, of course, to the passion and talent fairly overflowing from the stage of the Brooks Atkinson Theatre. Durant, in particular, seems like a bona fide star in the making. A more succinct, less dismissive capsule review of this beautiful but overwrought “Spring Awakening” would be: too much dreaming, not enough awakening.