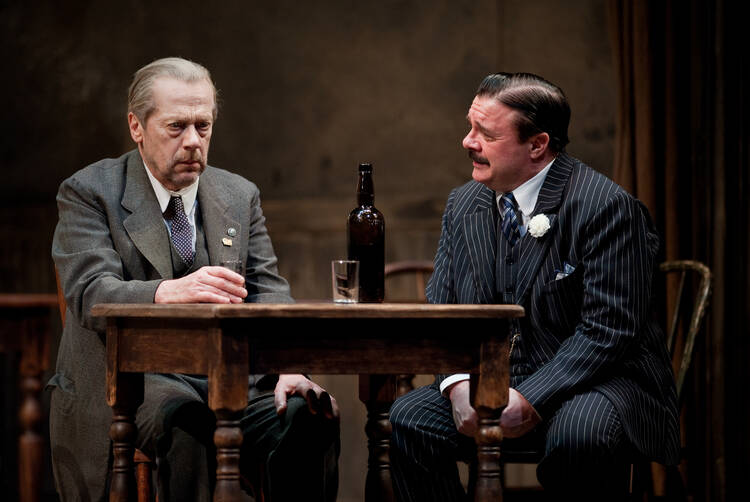 In 1912, at the tender age of 24, an aimless, alcoholic college dropout named Eugene O’Neill tried to commit suicide in a New York City flophouse called Jimmy-the-Priest. By then he’d already been married, had a son and divorced, and there was much more personal tumult to come in his eventful life. But while recovering from his suicide attempt and a bout of tuberculosis that same year, the young O’Neill had time for a lot of reading and reflection, and he found a new calling: to become a serious playwright, possibly America’s first great one.

Nearly 30 years and several dozen plays after that Loyolan rebirth, and well after O’Neill had realized his youthful ambition in spades, he revisited those convivial but unhappy barroom days with the writing of The Iceman Cometh, a huge, unwieldy funeral barge of a play about the transfixing power of self-delusion. Alternately affectionate and withering about its characters’ fatal insignificance, “Iceman” is unmistakably infused with O’Neill’s native emotion, which is a sort of existential survivor’s guilt; and here, amid the play’s toasts and revels, he goes well beyond callow thoughts of suicide to the bleak, Sophoclean notion that it would have been better never to have been born at all. That cheery takeaway message, in addition to the play’s nearly-five-hour length and large cast size, are among the reasons the play is seldom done; though considered a masterwork, “Iceman” has cometh to New York only four times since its 1946 debut.

The play has just returned in a rousingly thoughtful new production from Chicago’s Goodman Theatre, encamped through Mar. 15 at the Brooklyn Academy of Music. The musical association is apropos, for what director Robert Falls’s production demonstrates, among many other things, is that “Iceman” works best as a kind of symphony, with both its large-scaled form and its multi-vocal parts given orchestral heft and balance. Perhaps not coincidentally, at the helm of the cast is a musical theater pro, Nathan Lane, who plays the glad-handing salesman Hickey with his full range of cockeyed charm, sardonic wit and little-boy-lost pathos.

But a sense of the piece’s rough-hewn musicality isn’t all that helps this rambling, repetitious play go down easier than it might. Where most productions stick to a single barroom set, scenic designer Kevin Depinet has come up with four distinct takes on Harry Hope’s saloon, from sepulchral to expansive and back, in a conception that might be called Long Play’s Journey Into Blight. And the cast, many of them Chicago-based actors, doesn’t have a weak link. As the sentimental sourpuss Harry Hope, Stephen Ouimette—a major player at Canada’s Stratford Festival—gives a ghostly glow to the character’s dyspeptic blarney. And the redoubtable classical actor John Douglas Thompson manages to make Joe Mott, a one-time high roller now reduced to odd jobs for Harry, much more than a hoary African-American caricature.

Poised opposite Hickey, who has come to his regular bar with a quixotic new mission to cure its denizens of their drunken “pipe dreams,” are a pair of formidable adversaries with their own submerged drama. Larry Slade, a retired anarchist who’ll tell anyone in earshot that he’s just waiting for death, has a visitor from the West Coast—a young hothead named Parritt, with whose mother Slade was once entangled. If these two often seem like they’re in a separate play from the others, that’s not far off; plot details aside, Parritt’s and Slade’s back-and-forth can be read as young, guilt-wracked, suicidal O’Neill in conversation with his ostensibly wiser, resigned-to-oblivion older self. Slade is played by the lantern-jawed Brian Dennehy, a lumbering, Melvillean figure who embodies the play’s warped, wizened gravity without opening his mouth; when he does, his philosophical rasp is unexpectedly gentle, blessedly circumspect. As Parritt, Patrick Andrews is properly coiled tighter than anyone onstage, and he keeps the play’s dramatic tension sparking along in unexpected and ultimately heartbreaking ways.

If I’ve made O’Neill’s play itself sound like nothing but gristle—something to be chewed around but not enjoyed, let alone digested—allow me to clarify. As smooth and sympathetic as this production is, let’s give credit where it’s due: “The Iceman Cometh” is unbeautiful, sure, but also strong, undeniable, totemic; for all of its artifice and schematism, it has a life force that only need be unleashed to be felt. In fact, you can tap it simply by reading it on the page; O’Neill, whose plays were bestsellers in their day, is eminently readable in a way few playwrights ever are. Like Beckett’s “Waiting for Godot,” “Iceman” is one of those statuary monoliths of 20th-century theater you might think can only be reckoned with, not warmed up to; but both plays can also simply be enjoyed, believe it or not. It’s to this production’s great credit that its high notes of joy and despair are both fully sounded.

“Iceman” also happens to be the other great American play about death and a salesman. Its writing in fact predates Arthur Miller’s classic by a decade. But where Miller’s play hones in on a specifically American sense of disillusionment, a horror at the tragedy of manhood measured transactionally, O’Neill’s salesman, Hickey, gives voice to a more pervasive sense of doom. His long fourth-act monologue, in particular, speaks to a self-hatred so deep it feels itself beyond the reach of grace; it is the cry not so much of the unbeliever but of the miserable sinner who feels unworthy of being believed in. As Hickey lashes out at a loved one who would have the nerve to forgive even his worst transgressions, we see the Mobius strip of guilt that O’Neill’s characters, and he, run laps around: Feeling destined to failure and undeserving of happiness, they resent nothing so much as what they see as the false hope of redemption.

Of course, “Iceman” is also distinctly American, not only in its turn-of-the-last-century patois but also in its portraits of hubris and hustle. Larry Slade rightly calls Harry Hope’s saloon “the Palace of Pipe-Dreams.” Jimmy-the-Priest’s saloon, for its part, was eventually torn down to make way for the building of the World Trade Center.