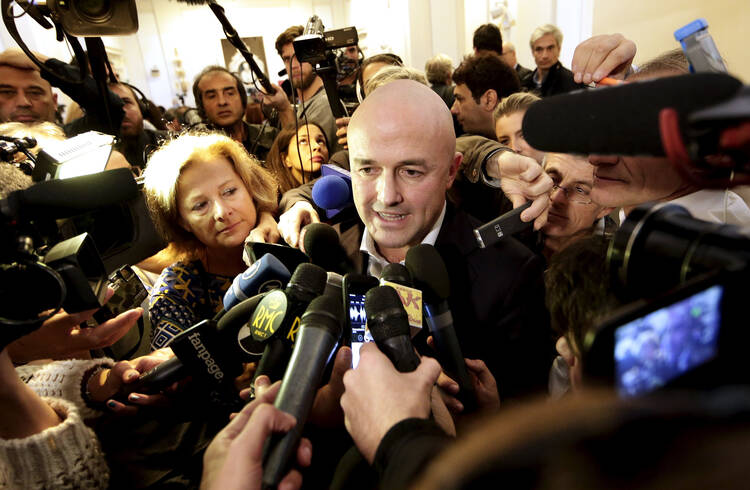 Early in the morning on the Via Veneto, famed for its 1960s “dolce vita” party scene, journalist Gianluigi Nuzzi seeks to defend himself from criticism hailing from a very different part of the city — the Vatican.

“Facts never harm democracy, knowledge and transparency,” he says with conviction, referring to his controversial new book, with copies piled up across the room.

Released on Nov. 5, “Merchants in the Temple” details the battle waged at the Vatican between reformist Pope Francis and the old guard seeking to maintain the status quo. The narrative is woven through a series of secret documents and recordings of high-level meetings obtained by Nuzzi, focusing on financial woes. The book has inevitably angered the Vatican.

But the author is confident that exposing the inner workings of the Holy See is the right thing to do: “I’m not harming the church. It’s these stories which harm the church, these people that take the money, badly manage the resources.”

The Vatican moved swiftly to counter Nuzzi’s narrative; chief spokesman Federico Lombardi described the leaking of secret documents as “illicit activity that must therefore be prosecuted.”

Days ahead of the book’s release, two people were arrested on suspicion of giving information to both Nuzzi and Emiliano Fittipaldi, who also released a book on the Vatican’s financial workings this week.

The Vatican on Monday announced the arrest of the Rev. Lucio Angel Vallejo Balda, a Spanish priest, and Italian laywoman Francesca Chaouqui, a public relations adviser. They had been appointed by Pope Francis to a temporary body, the Commission for Reference on the Organization of the Economic-Administrative Structure of the Holy See, tasked with pushing through the pontiff’s reform of the Vatican administration, also known as the Roman Curia.

The overhaul got underway shortly after Francis took office in March 2013. “It is no exaggeration to say that most of our costs are out of control. This is a fact. … Our books are not in order, we have to clean them up,” Francis told cardinals at a meeting on July 3, 2013, according to an audio record of the meeting that was obtained by Nuzzi.

The author recounts spiraling employee costs, a culture of nepotism and a system of lucrative contracts granted without open bids or clear budgets. Citing a 2009-2010 analysis by consultancy firm McKinsey & Co., Nuzzi writes that for work such as maintenance, the Vatican was in some instances paying 200 percent to 400 percent above the market rate.

While Francis has hoped to set an example, rejecting the pomp of a papal palace for modest living quarters, Curia cardinals are said to live in “princely dwellings” around 10 times the size of the pope’s residence. One Italian monsignor allegedly expanded his own apartment by breaking down a wall into the home of his neighbor, an elderly priest who was in the hospital at the time.

In detailing the “immense real estate holdings” of the Catholic Church, Nuzzi states that there are around 5,000 properties in Rome and Vatican City where rent falls below 1,000 euros a month and that hundreds are given rent-free to cardinals, laymen, bureaucrats and private individuals.

The pope’s reform commission discovered that the Vatican body that managed property, the Administration of the Patrimony of the Apostolic See, held assets worth seven times the recorded figures.

While details of the Vatican’s extensive assets in Rome and elsewhere in Europe suggest incredible property wealth, some of Nuzzi’s most striking revelations involve the money of individual Catholics around the world.

The Peter’s Pence, a fund of donations to the Vatican from Catholics globally, is described by the author as “an enigma cloaked in the most impenetrable secrecy.” Nuzzi claims little is known about how the money is spent. Of 53.2 million euros donated in 2012, boosted by 3 million euros in interest, a total of 35.7 million euros was handed to the Curia.

But the Vatican denied any wrongdoing. Lombardi stated that while “the pope’s works of charity for the poor are certainly one of the essential uses,” the pontiff may identify other areas where the Peter’s Pence is needed. “The pope’s service also includes the Roman Curia, as an instrument of his service,” Lombardi said.

The process for creating Catholic saints is also likely to catch attention, as an endeavor that Nuzzi states costs an average of 500,000 euros. Referring to internal correspondence between the Congregation for the Causes of Saints, the pope’s commission and consultancy firms,  Nuzzi says there is a complete lack of bookkeeping for costs associated with investigating proposed sainthood cases.

While Nuzzi’s revelations about the enormous costs and the lack of oversight depict the Vatican as mired in financial woes, it is his book’s details about resistance to the commission that portray the challenge Francis is up against.

Throughout “Merchants in the Temple,” the resistance to handing over financial information to the commission is evident in some quarters, while a March 2014 burglary, in which the committee’s documents were stolen, is interpreted as a direct attack on its work.

But it was a meeting of auditors on Dec. 18, 2013, in which they were called to approve the budget for the following year, where the lack of progress was laid bare.

In a transcript of the meeting cited in Nuzzi’s book, Joseph F.X. Zahra, chair of the COSEA commission, outlines his disappointment as the costly budgets show little change: “The fact that the same situations are repeated every year indicates a constant rather than a temporary crisis. The problem is not with procedures but with the mentality and the way of doing things.”

The Vatican has sought to downplay the meeting transcripts and documents that show tension within the highest realms of power, and Lombardi argues that the situation has changed since such meetings were held.

But while Nuzzi agrees that Vatican finances have seen some improvements in recent years, he is unconvinced that the pope’s battle has been won.

“Unfortunately there are these problems. The pope is going through with these reforms, but they’re reforms which are met with difficulties. … This war is still underway.”

Details from “Merchants in the Temple” about the battle waged at the Vatican between reformist Pope Francis and the old guard seeking to maintain the status quo:

$544,000: The average cost of sainthood arranged through the Vatican’s Congregation for the Causes of Saints. Also the price paid for a Christmas tree in St. Peter’s Square under Benedict XVI.

4,789 square feet: The size of Italian Cardinal Velasio de Paolis’ apartment, the largest home in the Vatican’s Palace of the Holy Office. Pope Francis’ own lodgings are said to be around 538 square-feet.

$22: The annual rent charged to one Vatican employee for a 1,044-square-foot apartment on Via di Porta Cavalleggeri, close to the Vatican, based on a lease signed on Nov. 1, 2011.

70: The number of experts brought in from outside companies, such as Ernst & Young, to help the pope’s reform commission.