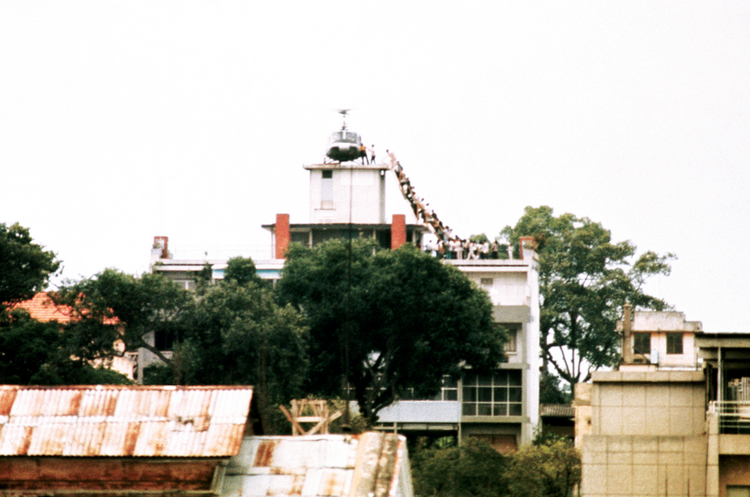 Promises made in good faith, promises broken. People being hurt because we “couldn’t get our act together.” The whole execution of the war being summed up, quite rightly, by the chaos and ineptitude of its last act. And no, we are not talking about the Middle East.

The director Rory Kennedy does not, in fact, draw any of the obvious, academic parallels that might be made between present day U.S. foreign policy and the events recounted in Last Days in Vietnam, her disarming documentary about the fall of Saigon, a movie that is as much about human decency as diplomatic incompetence. Even Stuart Herrington, the ex-Army captain quoted above—and one of Kennedy’s more eloquent eye witnesses to the panic and pandemonium that befell Vietnam’s former capital as the northern forces concluded their inexorable march south—refrains from any such reflection. And yet a hair-raising sense of déjà vu is imparted nonetheless.

But so is hopefulness about the human capacity for good and what happened when, as Herrington puts it, “good people rose to the occasion and did what had to be done.” Kennedy talks to a number of those people, who gives the lie to Richard Nixon’s claim of “peace with honor” and recall the fleeing helicopters and the 420 people left stranded at the U.S. embassy compound, and the thousands abandoned nationwide to be executed, imprisoned and/or “re-educated” by the North Vietnamese. There is among them a profound sense of failure, coupled with humbling modesty about their own accomplishments in the face of overwhelming odds and a task that was impossible on its face—getting all the imperiled South Vietnamese out of Vietnam.

There is little anger exhibited by the men (yes, all men), even when it is warranted. Although depicted as a southern gentleman, and a man who had lost a son to combat, Graham Martin, the U.S. ambassador to Vietnam, seems to have been willfully blind to the terrifying advances of the North Vietnamese. He refused to countenance talk of any imminent invasion, or entertain the need for a real evacuation plan, and forced the people around him to engage in “black ops” (as ex-C.I.A. analyst Frank Snepp puts it): Smuggling Vietnamese out of the country aboard cargo planes and into the Philippines and facing career-ending reprimands if discovered.

Kennedy, whose uncle accelerated the war and whose father eventually fought against it, provides a lot of astounding footage that was not on the evening news in 1975. One sequence, shot from inside a departing World Airways jet, for instance, shows crew members hauling desperate Vietnamese into the plane as it taxies down the runway. That would have been unpalatable, to put it mildly, for political interests back in the United States.

For those too young to remember it all, Kennedy provides solid historical shorthand. The Paris Peace Accords of 1973 called for a cease-fire between the north and the south; the North Vietnamese kept their end of the bargain largely because, as Snepp puts it, they considered Nixon a “madman” who would relaunch the war if he felt it necessary. Then, in August 1974, Nixon resigned in the wake of the Watergate scandal, and all bets were off. A year later, Saigon was on the precipice.

According to Gerald Berry, at the time a Marine pilot who flew exhausting flights ferrying refugees out of the Saigon embassy and onto Navy ships waiting far offshore, there had been four plans considered for getting people out: 1) commercial carriers would be brought right into the harbor, relatively close to the embassy, and as many people as necessary could be brought aboard; 2) United, Continental and other commercial airlines still able to access Tin Son Nhut Airport could load passengers there; 3) fixed-wing aviation could use the airport and fly out hundreds; 4) helicopters, limited in capacity and range, could airlift dozens at a time to those ships off shore.

This last contingency plan was “absolutely the last resort” and of course, as anyone knows who has seen the infamous photos, is also exactly what happened.

How it happened, though, is beyond fascinating. Kennedy and her editor, Don Kleszy, provide both visual momentum and a great deal of poignancy through their reconstruction of events, with certain moments achieving a sublime sense of tragedy. On the morning of Aug. 29, for instance, the citywide signal that an evacuation was underway was to be a weather report over the radio followed by the playing of “White Christmas.” The irony and agony achieved as Bing Crosby croons a Christmas carol behind the tortured faces of doomed Vietnamese is almost unbearable.

A sense of moral conflict informs all of “Last Days in Vietnam,” and not just for the participants. Henry Kissinger, who must have attached all kind of conditions before agreeing to appear in the film (such as, “Don’t ask me any real questions”) makes some anodyne comments about President Gerald Ford’s attempt to get Washington to appropriate $722 million to aid the crumbling South Vietnamese government (Congress to Ford: Drop dead). Martin, who succeeded Ellsworth Bunker as ambassador to South Vietnam and was, obviously, the last man to hold that post, died in 1990. The people Kennedy does talk to include servicemen on both sides and several Saigon civilians, not all of whom met pleasant fates after the last helicopter blew town. But a young man named Miki Nguyen tells the wonderful tale of his father, who commandeered a Chinook copter, flew it and his family to a waiting U.S. ship, dropped his family one by one to the waiting sailors and then ditched his aircraft, surfacing only in his underwear.

One of the other interesting resurfacings in “Last Days,” especially for those who associate him more with having blown the cover of ex-C.I.A. agent Valerie Plame, is the former Deputy Secretary of State Richard Armitage. He had done three and half tours in Vietnam as an Annapolis-educated officer, was the man who spirited the Vietnamese fleet away before it could fall into North Vietnamese hands and was eventually in command of the U.S.S. Kirk, the ship that took on those last desperate helicopter flights out of Saigon.

Regarding all those violations of protocol, procedure and law committed by the operations officers at the center of the Saigon exodus, Armitage puts it pretty simply: “It’s a lot easier to beg forgiveness than to get permission,” he says to Kennedy, who tells a remarkable story, full of such timeless lessons.

John Anderson is a film critic for The Wall Street Journal, Indiewire and Newsday and a regular contributor to the Arts & Leisure section of The New York Times.