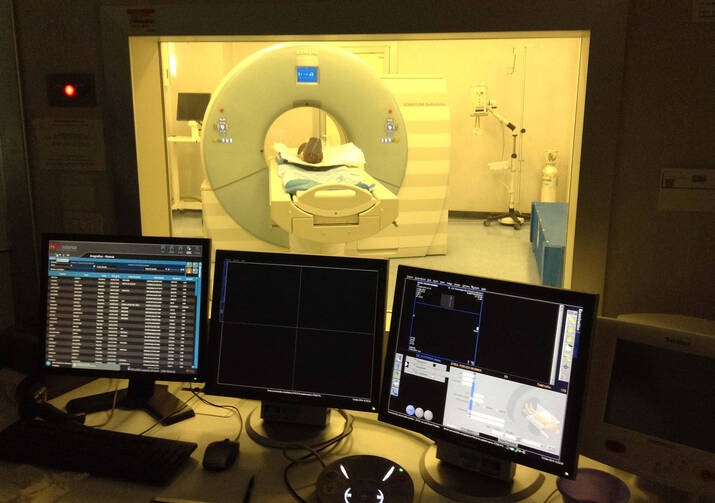 Scientific advancements in imaging technology, genetics and nano research have allowed museums to make new and surprising discoveries about the tightly wrapped mysteries of ancient mummies.

The Vatican Museums also have been employing the latest state-of-the-art laboratory tools and tests to find out more about the ancient mummies in its collections.

Fabio Morresi, an assistant at the museums' diagnostic laboratory, said his job is "like being the CSI of the Vatican Museums," referring to the hit TV show of crime scene investigators who scour every trace of evidence to solve mysteries.

While historical studies are important, museum research today "can't be done without laboratory analysis," said Alessia Amenta, Egyptologist and curator of the museums' Department for the Antiquities of Egypt and the Near East. She and the museums' laboratory experts spoke at a news conference Jan. 22, unveiling their latest discoveries.

Amenta spearheaded the museums' Mummy Project in 2007, using the latest scientific techniques to study and restore the nine mummies in their collection.

Their first two-year round of sophisticated testing revealed the "she" mummy identified on the sarcophagus as "daughter of Sema-Tawi" is really a "he," who suffered from what looks like a benign tumor on the scalp—making it what could be the first case of this kind of tumor for a mummy.

Amenta focused the latest investigation on two small mummies that are one- to two-feet-long, have a painted plaster face covering the head and three-dimensional painted coverings made of plaster and linen bandages called cartonnage.

Amenta said the small specimens could have been an embalmed child, a small animal or falcon or a so-called "pseudo-mummy"—a bundle of wrappings and other materials—sometimes a few bones—that were used in ancient times to substitute a missing or incomplete body of a dead loved-one.

The transfiguration and "divinization" of the deceased was so important for the ancient Egyptians that some kind of physical form had to be designated to send "into another dimension" after death, she said.

They used: X-ray florescence and electron microscopes to tabulate what chemical elements were contained in all the materials; carbon dating to determine the different materials' age; infrared and ultraviolet analyses to reveal colors and images hidden to the naked eye; gas chromatography-mass spectrometry to identify the presence of organic compounds; and CT-scans to create 3D images of the contents inside.

Morresi said they discovered that each tiny package was "like a box full of Legos" containing a random assortment of adult bones, like the long tibia and fibula of the lower leg, vertebrae from the spine and foot bones.

"Every time we got close to an answer" another test result would reveal "something that set us back. The results were schizophrenic, with things saying the mummy could be real and then that it was not," he said because "some materials, techniques and contents were pertinent to the era" and others were not.

For example, the wrappings were from 3,000 B.C., but the bones were from a man and a woman from the Middle Ages.

Other red flags revealing something fishy were the presence of zinc and tin in the paints and a metal laminate often used to darken colors—all elements not found in pigments used at the time. These created an aging effect.

Perhaps the last nail in the coffin of any theory they could be authentic came from the "multiplanar reconstruction" of hundreds of CT-scan images pieced together of 0.6 millimeter-thin sections of the whole object.

By filtering images according to each object's density, "we can 'erase' the thick cartonnage mask and just look at the bandages" or peel off the image of the thin wrappings to just see the dense bones underneath, said Sveva Longo from the museums' lab.

This process revealed something the X-rays did not, she said: a "modern nail" was stuffed inside with the jumble of bones.

All the data taken together proved the mummies were fakes, they said.

While their sophisticated tools helped unlock the mystery, Ulderico Santamaria, director of the diagnostic laboratory, said it helped immensely that whoever made the forgeries was not very good at crafting a convincing con.

"Thanks to the fact he didn't know the techniques very well, we found out" the forgeries quite easily, he said.

Amenta said a fake mummy "is a well-defined category" so it "is not a scandal" to uncover them in their collections.

The industry of churning out fake mummies was widespread even back in the age of the pharaohs 5,000 years ago, she said, making them a legitimate and interesting offshoot field of study.

Creating fakes reached a high point in the 1800s when Europe began experiencing a real "mummy mania" after Napoleon's expeditions to Egypt spread word of the wonders found there and the discovery of the Rosetta Stone in 1799, which helped decipher hieroglyphics and led to the emergence of Egyptology as a new and real science, Amenta said.

Elite Europeans needed proof of their exploits in Egypt and show off to their friends back home, she said.

One monk captured the mood when he noted in 1833, "It would be hardly respectable, upon one's return from Egypt, to present oneself without a mummy in one hand and a crocodile in another."

Amenta said mummies were in high demand from the Middle Ages up to the Renaissance because they were burned and used as a powder in apothecary potions for various ailments.

"The market was so huge," she said, that adjusted for inflation, two pounds of mummy dust would be equivalent to $17,000 today.

Their bodies were also used to create the brown for oil paints aptly named "Mummy Brown," she said, showing how forgeries had been a huge business for hundreds of years.

"What we showed was how this approach" of using modern medical and scientific advancements "was necessary to discover this common phenomenon" in the Vatican's collection.