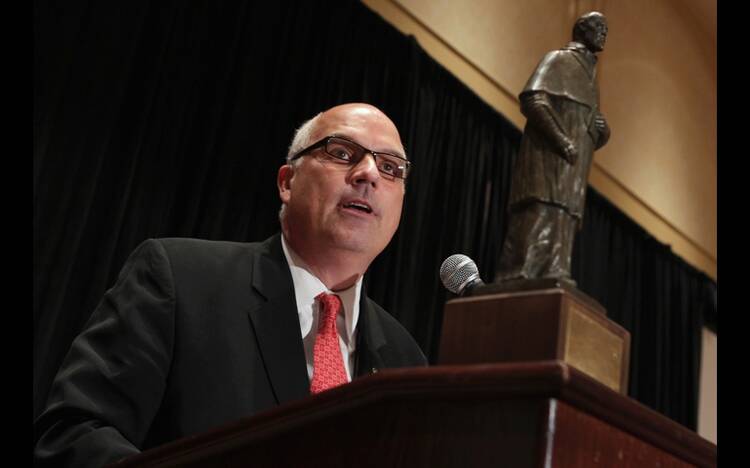 Tony Spence has stepped down from his position as Director and Editor in Chief of Catholic News Service, a position he has held since 2004, after a series of comments on Twitter drew the critical attention of web-based fidelity watchdogs at the Lepanto Institute, LifeSite news and other sites.

An emotional Spence said this afternoon that critics went after him "full-court on the blogoshere” over the past few days. Spence was told yesterday during a meeting with  Msgr. J. Brian Bransfield, the general secretary of the bishops' conference, that he had “lost the confidence of the conference” and was asked to submit a letter of resignation.

The web-based publications, which in the past have frequently targeted Catholic Relief Services and the Catholic Campaign for Human Development, began a drumbeat for Spence’s removal after he posted a series of tweets commenting on impending laws related to bathroom access and other rights for lesbian, gay and transgender people. The Lepanto Institute accused Spence of issuing "public statements decrying proposed legislation in several states that would protect religious freedom and deny men pretending to be women the 'right' to enter women’s bathrooms."

Spence said that the web campaign provoked hate mail to his e-mail account, with messages urging his excommunication and calling him a traitor to the faith. Spence said he did not believe his Twitter comments would provoke such a backlash—“obviously”—but that he had been to his mind merely commenting on developing news on a subject frequently covered by CNS staff.

Spence said that he had anticipated ending his career at CNS. “Sixty-three and unemployed; not the brightest prospects,” he said with a grim laugh. “My plan now is to go home to Tennessee and start over,” he said.

He added, “My 12 years at CNS have been the best 12 years of my professional life; my staff is just amazing and I’ll miss it.”

In 2010 Spence was the winner of the Catholic Press Association's St. Francis de Sales Award.

He said then that when Msgr. Owen Campion gave him his first Catholic press job at The Tennessee Register, diocesan newspaper in Nashville, Tenn., more than 30 years ago, "I thought I would give it a year."

"It hardly took that long to realize it was much more than a job," he added. "It was a vocation. And one I truly love."

Spence thanked his colleagues in the Catholic press for sharing his "love of this vocation."

He served as CPA president from 1994 to 1996 and oversaw the establishment of the Catholic Advertising Network and the Catholic Press Foundation. He also was a co-founder of the Appalachian Press Project of Kentucky and Tennessee.

Catholic News Service is an office of the U.S. Conference of Catholic Bishops and Spence was a member of the conference senior staff. Though part of the bishops' conference, the news service is financially self-supporting by "providing news stories, features and reviews to paying clients that are both secular and religious news outlets," according to a notice on the conference website.