Finding a place for hope in hard-hit Flint, Michigan 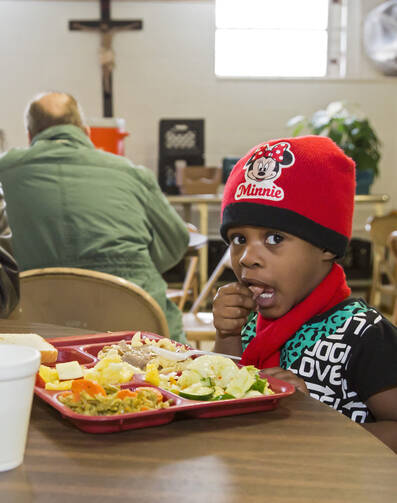 “In the year 2525 if man is still alive…” went the old song. Adapting it to Michigan today, the refrain would be: “In the year 2025, if Flint is still alive....” I certainly think that Flint is going to still be around a decade from now, but the key question is: “What will it—and other similarly distressed cities—look like?”

In the life of a city, a decade can matter a lot. I was born in Detroit in February 1957, and it had a distinct look and flavor to it then, one of burgeoning middle-class prosperity and comfort.

Ten years later, newer cars were on its streets and a few white citizens had moved out, but it was a city I still recognized. Six months later, however, the Detroit riots would put an end to that familiarity.

Fast-forward another 10 years. In 1977, wholesale changes had taken place in some Detroit neighborhoods and regrettably little had changed in others, which remained mired in post-riot poverty or worse. The pace of departure from the riot’s center had quickened. Many families, including my own, had moved to presumably safer, more stable areas.

When I look at the circumstances facing Flint in 2015, what’s missing is the crisis-urgency of an event like the Detroit riot in 1967 or similar upheavals that transformed urban areas during that tumultuous period in American history.

Flint’s experience, however, represents something different. The changes in Flint today versus the Flint of 10 or 20 years ago have not been as dramatic. Flint has not been suddenly altered by a catastrophic event. It never endured a full-blown civic uprising like those of 40 years ago in Detroit or Chicago or a cataclysm like that in Los Angeles following the Rodney King verdicts. Nor have we seen widespread civil unrest in Flint like that in Ferguson, Mo.

Flint’s experience has been one of slow, inexorable decline, less dramatic but nonetheless qualitative and quantifiable, felt as well as measured. The city’s decline resembles more the effect of erosion on a river bank or the steady drip of a rivulet of water upon a stone or rock in its path.

Frequently what captures our minds and hearts is the immediate crisis—the attack on the Twin Towers in 2001, the terrorist attacks in France last year or the tsunami in Japan in 2012. Such disasters provide images and sound bites that are the stock of media coverage. But how do you convey the steady diminishment of a community’s economic base, its job market, housing stock—even its water supply and delivery system? How do you create the sense of urgency necessary for a response?

Flint and other small, declining cities confront a dilemma partly of immediacy—falling into decay, not to crises that might provoke a comprehensive response. Time will tell if the current water emergency will prove compelling enough to inspire the intervention from government and community members that Flint desperately needs.

A Challenge for Evangelization

I am not prescient. I cannot foresee the decade ahead. If you had asked me in 2005 if I could have imagined an African-American president of the United States or gay “marriage” or a dozen other social or cultural constructs, I might have said, “Not in my lifetime!”

But I think I can foretell the future for a community like Flint if something does not change soon. That is why efforts like Faith in Flint, which I coordinate for the Diocese of Lansing, are so important if a 10-year vision that is positive and hopeful is to be realized. Faith in Flint is an initiative connecting the whole diocesan community with the people of Flint—focused on hope, trusting in the Holy Spirit and encouraging the application of some much-needed civic elbow grease across the city and across parish borders.

The poor, the gangs, violence, drugs and crime will always be with us in 21st-century America. But by the guarantee of Christ, so too will the Holy Spirit be with us always, so hope is always with us.

Are we a people of hope, trust and faith and, most important, the Holy Spirit? Can we creatively and collaboratively reimagine our community, recognizing that there is no one answer to Flint’s problems, but perhaps a multitude of them, lacking only our prayer, imagination, determination and force of will to make them a reality?

U.S. Census data indicates that Flint faces a dwindling population that is increasingly nonwhite and less educated than previous generations of residents. How will a dynamic church meet this challenge in the coming years? How will we raise up lay and religious leadership through our Catholic schools and parish faith formation activities? Who are we evangelizing, and what are we evangelizing them to?

The city’s changing demographics simply mean that, as in many cities across the country, this urban faith called Catholicism must be preached, ministered and lived by, in and for persons who are different from urban communities ministered to by the church in the past. That is the true challenge of evangelization (whether it is called old or new) in 21st century America.

While some feel the decline of Flint has become irreversible, that does not have to be the case. The past is unchangeable. It is Flint’s future we must concern ourselves with. Events like Back to the Bricks (the city outdoor auto show), the Crim Festival of Races (a 25-k run/walk event) and other civic celebrations put the emphasis on people gathering together in peaceful, positive contexts. Flint needs more of them.

Faith in the Future

The future is made up of the decisions we make today. Our faith calls us to hope, not despair; trust, not skepticism.

The program Faith in Flint requires just that: faith. Those who believe in the future of Flint need to make an investment in it today. Faith is born of trust.

The Book of Proverbs reminds us, “Without vision, the people perish!” (29:18). In Rom 8:25 we hear, “But if we hope for what we do not yet have, we wait for it patiently.” Faith is engaged because of hope. Without hope, there is no expectation that anything can improve for individuals or communities.

There must be a restored vision for the future of Flint. There must be something in which the people can place their hope, their trust, their time, their talent, their treasure and their patience.

In her autobiography, St. Thérèse of Lisieux, a doctor of the church whose “little way” continues to inspire millions, wrote, “What matters in life is not great deeds, but great love.”

Join me and countless others in this Faith in Flint initiative. Let us adopt St. Thérèse as our patron. Let us be those “action heroes” that our faith calls us to be, a people not of great deeds, but of great love. A people of hope, trust and vision, who indeed do have faith in Flint.

Ronald Landfair is director of multicultural ministry for the Diocese of Lansing and coordinator of its Faith in Flint initiative.