Catholics Have a Lot to Learn About Islam 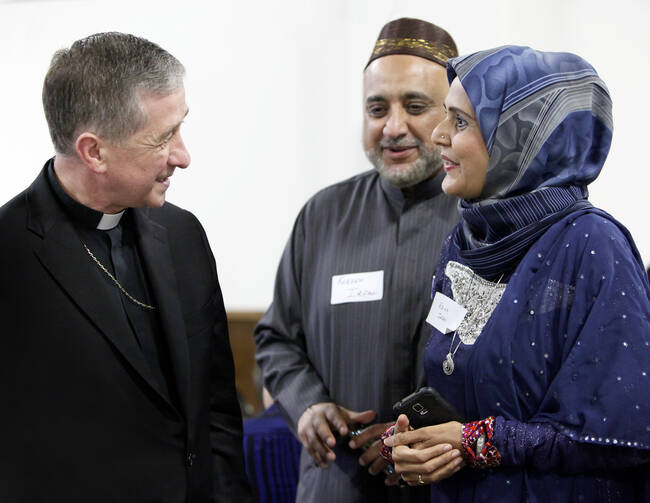 That is according to a report released on Sept. 12 by Georgetown University’s The Bridge Initiative, a program at the Washington, D.C., Jesuit university aimed at improving public understanding of Islam while tracking the public discourse on Islam and Muslim life.

“We hope Catholic educators, catechists and clergy can use this report as a starting point to ask, ‘What do Catholics know; what do Catholics not know; and what do we need to be communicating?’” Jordan Denari Duffner, the author of the report, told America.

The survey also asked about religion and violence. Forty-five percent of Catholics said that Islam encourages violence more than other religions, while 24 percent said it encourages violence as much as other religions. About four in 10 U.S. Catholics agree that “Muslims have sufficiently condemned acts of terrorism committed in the name of Islam” while another four in 10 disagree.

Catholics in the United States are not sure about what they share in terms of religious belief with the world’s 1.6 billion Muslims. About a third of all U.S. Catholics (32 percent) believe that Catholics and Muslims worship the same God, while 42 percent say they do not. About a quarter are unsure.

In Vatican II’s “Declaration on the Relationship of the Church to Non-Christian Religions,” the church affirms that the three Abrahamic faiths—Judaism, Christianity and Islam—all worship the same God. But as the report shows, this teaching is still not fully understood or accepted by all believers.

The report notes that St. John Paul II reiterated Catholic teaching about the three monotheistic faiths worshiping the same God in a 1985 speech to Muslim youth in Morocco in 1985. He said then, “We believe in the same God, the one God, the living God, the God who created the world.”

Denari Duffner noted that Pope Francis often portrays Islam in a positive light, which has affected how the Catholic press in the United States represents Islam. “The way our religious leaders talk about Islam is often the way people learn about Islam,” she said.

When it comes to Jesus, 74 percent of Catholics said Muslims do not hold Jesus in high regard and 88 percent said they do not honor Mary. In fact, Muslims believe Jesus is a revered prophet and that Mary is his virgin mother.

Nearly half of U.S. Catholics, 44 percent, said either that they did not know of any similarities between the two faiths or that they believed there were none at all.

Michael J. O’Loughlin
@MikeOLoughlin
Show Comments (
3
)
Comments are automatically closed two weeks after an article's initial publication. See our comments policy for more.
Leonard Villa
5 years 9 months ago
How about saying Islam has a lot to learn about Catholicism? How about concern about the continuing murder and persecution of Christians in the name of Islam by terrorists instead of what Catholics know about Muslim teaching? How about focusing the dialog Archbishop Cupich has asked for between Catholics and Muslims to interpretations of the Koran which the terrorists claim oblige them to murder Christians and Jews and all non-Muslims? I think the unfavorable opinion of Muslims by U.S. Catholics has to do with world events rather than lack of knowledge about Islamic teaching compared with Catholic teaching.
Peter Connor
5 years 9 months ago
There is a lot to say about this subject, far too much for a comment on an article. But, I would say that the Muslims that attend the mosque just down the street from our home are devout. The kids attend public school but also 'church school,' the men and women arrive to pray at all times of the day and night, and Friday prayer is well attended. I have known these people for over 20 years. I have found them to be peaceful, self-keeping, industrious, and happy to be in our city. They have graciously invited me into their homes and I have eaten their food. If my profile of the Muslims in my midst is fair, then I say there is a place for them here, where I am. I have no quarrel with them. I do not hold them responsible for the carnage perpetrated by other Muslims thousands of miles from here. We see each other, embrace, and exchange 'glad tidings' with each other. I am not afraid.
argentina herrera
5 years 9 months ago
The title should have "American" in front of Catholic because at the root of bias against Muslims is the purely American racism that is so pronounced among American Catholics , the majority of whom are white. The Catholic Church has a history of racism and consequently American Catholics don't think much of people of color and I have had many an uncomfortable encounter in several churches that I have attended. It is as if they are wired to see POC as solely the "needy, poor and wretched" which frames Catholic charity at times as an expression of a weird paternalistic activity.