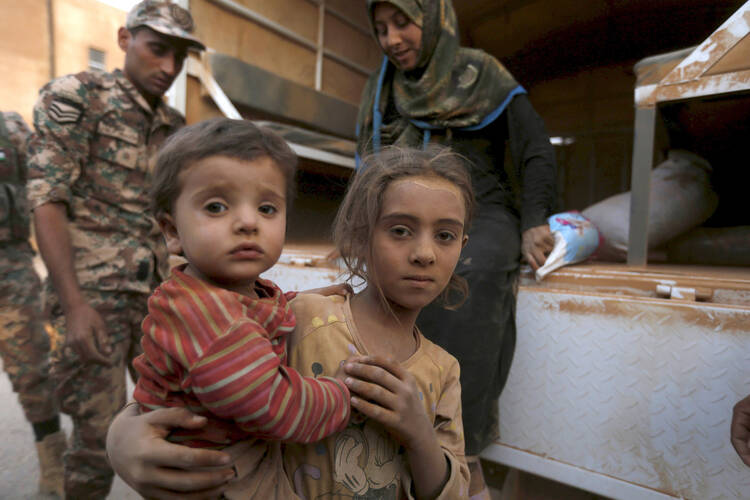 As borders in Europe and the global public conscience continued to be roiled by the Syrian refugee crisis, the Obama administration announced on Sept. 10 that it would seek to admit 10,000 Syrian refugees during the next fiscal year. That number would reflect a significant increase from the 1,293 admitted in fiscal 2015, but it falls far short of the number other nations have pledged to accept. A White House official told reporters on Sept. 10 that the administration would also seek to increase the total number of refugees beyond the current 70,000 set aside for fiscal 2016, so that the Syrian response would not mean cuts in resettlement numbers offered to the displaced in other troubled regions of the world.

“The United States could take considerably more refugees for resettlement if it had the political will to do so,” said Mitzi Schroeder, the Director for Policy for Jesuit Refugee Service/USA. She explained that domestic capacity to resettle people once approved is not an obstacle in the United States. In the past in fact much higher numbers of refugees have been absorbed. After the chaotic end of the Vietnam War, the United States resettled 10,000 refugees a month from Vietnam alone, she said.

But now, according to Schroeder, the “cumbersome and lengthy security procedures” put in place after 9/11 make rapid response to such crises problematic, requiring the deployment of  tremendous resources to get refugees interviewed and approved. She added, “Another impediment is security concerns affecting the work and movement of U.S. government staff in certain parts of the Middle East, limiting the ability to grow the program as it is presently implemented.”

“The President’s decision was for the admission of at least 10,000,” said State Department spokesperson John Kirby. “I think there’s a measure of flexibility here in terms of where the number might end up going. Obviously, nobody wants to see the situation in Syria get worse. Nobody wants to see more, hundreds of thousands more Syrian families have to flee the region…. But we are mindful that it is a very dynamic situation and we’re certainly mindful that under Bashar al-Assad’s leadership Syria is absolutely not any safer or more secure for the people who live there.”

The decision follows widespread demands from Catholic political and religious leaders that the United States, already the world's top resettlement country, respond in a more substantial way to the refugee crisis.

U.S. Conference of Catholic Bishops President Archbishop Joseph E. Kurtz of Louisville, Kentucky, issued a call for a stronger effort on behalf of Middle East refugees on Sept. 10, just a few days after a dramatic appeal from Pope Francis that every Catholic parish in Europe house a refugee family. “I urge all Catholics in the United States and others of good will to express openness and welcome to these refugees, who are escaping desperate situations in order to survive,” he said. “Regardless of their religious affiliation or national origin, these refugees are all human persons—made in the image of God, bearing inherent dignity, and deserving our respect and care and protection by law from persecution.”

Expressing his solidarity with the Holy Father, the bishops of Syria, the Middle East and Europe “and all people who have responded to this humanitarian crisis with charity and compassion,” Archbishop Kurtz said, “I also encourage the U.S. government to assist more robustly the nations of Europe and the Middle East in protecting and supporting these refugees and in helping to end this horrific conflict, so refugees may return home in safety.

He added, “The Catholic Church in the United States—with nearly 100 Catholic Charities agencies and hundreds of parishes assisting refugees to this country each year, and with Catholic Relief Services providing humanitarian aid to refugees in the Middle East and Europe—stands ready to help in this effort."

In May members of Congress urged the administration to accept as many as 65,000 Syrian refugees for permanent resettlement. Vermont Senator Patrick Leahy released a statement on Sept. 9 before the White House announcement, urging "a response commensurate with our nation’s role as a humanitarian leader."

He said, "For months I have urged the administration to dramatically increase the number of Syrian refugees it would accept in the face of this crisis. We must do more.” The senator urged reconsideration of an amendment he offered over the summer to restore $415 million in refugee aid that had been cut from the fiscal year 2016 Senate foreign aid bill, a measure which never made it out of the the Appropriations Committee.

“Many in Washington are looking forward to a visit later this month by Pope Francis, who just this week asked the faithful throughout Europe to shelter refugees fleeing ‘death from war and hunger,’" the senator said. "In the United States, we can do the same thing. We can respond, as we have before, with meaningful action that is worthy of a nation of immigrants with by far the largest capacity to act, as the world expects us to. I urge both the administration and leaders in Congress to do just that.”

Officials from the Jesuit Refugee Service/USA welcomed the new commitment from the United States but suggested that the new numbers should reflect only the beginning of a more comprehensive effort to respond to the deepening crisis. “JRS believes the United States must do far more to ensure that not only Syrians but also refugees of other nationalities seeking protection by flight across the Mediterranean are offered the dignity, compassion and opportunity they deserve.

“While it is good news that the EU nations and the U.S. government are moving to offer more resettlement to Syrians, it should be noted that the current refugee flow into Europe is composed not only of Syrians but also of Iraqi, Afghan, and Eritrean, Sudanese and other African refugees, with equally compelling protection needs.”

JRS suggests that the Obama administration support increasing access for all groups in the Middle East seeking resettlement, beginning with people with close ties to the United States, “for example, the family members of U.S. citizens and former U.S. government employees, in European locations.”

JRS officials point out that even as nations agree to higher refugee thresholds, the current bureaucratic process for registering, vetting and accepting refugees remains onerous and in its current composition will never meet the pressing needs of the crisis. Most resettlement officials agree that it would be best to increase processing resettlement applicants in the adjoining nations where the displaced first sought their escape from the Syrian civil war, that is, before they flee across the Middle East and the Mediterranean to gain access to Europe.

Unfortunately for these would-be applicants the already cumbersome procedure is complicated by a lack of access to U.S. diplomatic staff and State Department capacity to process resettlement applicants. According to current procedures, after vetting by U.N. refugee officials UNHCR, Syrian refugees who want to resettle in the United States must be interviewed by officers of the Department of Homeland Security at U.S. diplomatic facilities in Amman, Jordan or Istanbul, Turkey.

A State Department official said on Sept. 9 that it can take “between 18 to 24 months between when a refugee is referred to us and when they [if approved] end up arriving in the United States.” Security vetting represents a significant aspect of the process. The official added, “What to me is astonishing is how many people inside Syria who have been affected by the war who are dependent on humanitarian assistance or are displaced—there’s over 7 million people displaced—have chosen not to leave Syria but to stay there.

“[That's] one of the reasons we try to get as much aid as possible inside Syria is so that they can survive there—since they’re choosing to stay there, they can survive and not have to flee.” The official said the United States has already spend more than $4 billion on humanitarian aid to support this population since the start of the crisis.

As that figures suggests, resettlement, “while tremendously important for some individuals,” is not the full answer for a crisis of this size, said Schroeder. “More resources are needed to improve the situation in the region to keep the door open for refugees arriving and to make refugees’ lives tolerable while in exile.” That could "alleviate the pressure forcing refugee families to take risky routes to seek better conditions." She added, "Creative thinking is also needed on ways to make refugees safe and self-sufficient in the short term, for example, through a legal status including right to work, until some long term solution can be reached.”

Kevin Clarke
@ClarkeAtAmericaclarke@americamedia.org
Show Comments (
1
)
Comments are automatically closed two weeks after an article's initial publication. See our comments policy for more.
William Atkinson
7 years ago
Stop the blame game, and rhetoric and stand up, Bishops, Catholic Universities, Catholic organizations; and act on request of Pope Francis and take in refugees, every church, every institution, every organization in the catholic Realm and Kingdom of Christ to act. Don't be the bystander, but the Good Samaritan and open the doors to these Christians, Muslims, Jews, all the children of Abraham, and our brothers and sisters and their multitudes of children. Don't wait for slow meandering government, act now.