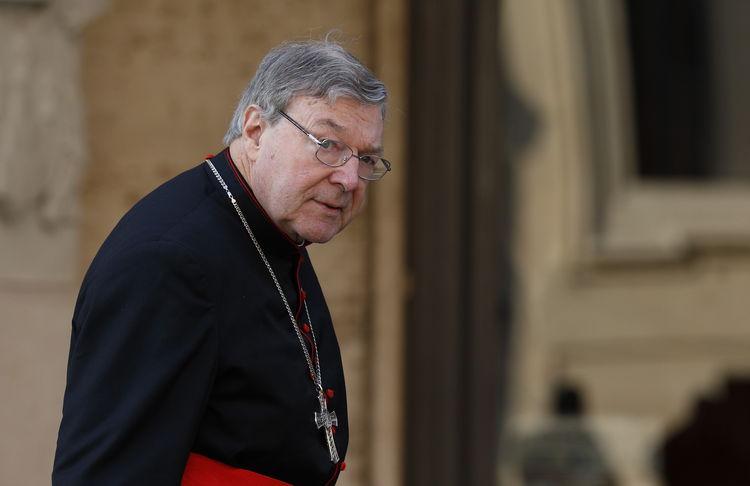 Cardinal George Pell said working-group reports from the Synod of Bishops on the family finally give a true picture of the assembly's views, counteracting what he characterized as a misleading midterm report.

"We wanted the Catholic people around the world to know actually what was going on in talking about marriage and the family and, by and large, I think people will be immensely reassured," Cardinal Pell, prefect of the Secretariat for the Economy, told Catholic News Service Oct. 16, the day the reports were published.

"We're not giving in to the secular agenda; we're not collapsing in a heap. We've got no intention of following those radical elements in all the Christian churches, according to the Catholic churches in one or two countries, and going out of business," he said.

In a surprise move, synod members voted Oct. 16 to publish summaries of comments by 10 small groups into which they had divided to discuss an Oct. 13 midterm report by Hungarian Cardinal Peter Erdo of Esztergom-Budapest. As the assembly's relator, Cardinal Erdo has the task of guiding the discussion and synthesizing its results.

Cardinal Erdo's report stirred controversy inside and outside the synod hall with its strikingly conciliatory language toward people with ways of life contrary to church teaching, including divorced and civilly remarried Catholics, cohabitating couples and those in same-sex unions.

The midterm report was "tendentious, skewed; it didn't represent accurately the feelings of the synod fathers," said Cardinal Pell. "In the immediate reaction to it, when there was an hour, an hour-and-a-half of discussion, three-quarters of those who spoke had some problems with the document."

"The secret for all Catholic vitality is fidelity to the teachings of Christ and to the tradition of the church," said the cardinal, who sits on the nine-member Council of Cardinals advising Pope Francis on church governance.

Cardinal Pell said only three of the synod's 10 small groups had supported a controversial proposal by German Cardinal Walter Kasper to make it easier for divorced and civilly remarried Catholics to receive Communion, even without an annulment of their first, sacramental marriages.

"Communion for the divorced and remarried is for some—very few, certainly not the majority of synod fathers—it's only the tip of the iceberg, it's a stalking horse. They want wider changes, recognition of civil unions, recognition of homosexual unions," Cardinal Pell said. "The church cannot go in that direction. It would be a capitulation from the beauties and strengths of the Catholic tradition, where people sacrificed themselves for hundreds, for thousands of years to do this."

"If people are heading in the wrong direction, there's no virtue in the church saying 'that's good.' A lot of people outside won't accept our views, won't welcome them, but certainly not the people in the pews, the good people," he said.

Cardinal Pell said he expected the synod's final report, currently being drafted by a team of 11 members, would reflect the assembly's views. But he said that if it did not, the synod would not vote its approval before ending its work Oct. 18.

He also noted that the synod would not issue any document with doctrinal weight, its task being to set the agenda for the world synod on the family scheduled for October 2015.

"Our task now is to ask people to pause, to pray, to catch their breath, to realize there's going to be no abandonment of Catholic doctrine, and to work to diminish the divisions and to prevent any radicalization of different factions or points of view," he said.