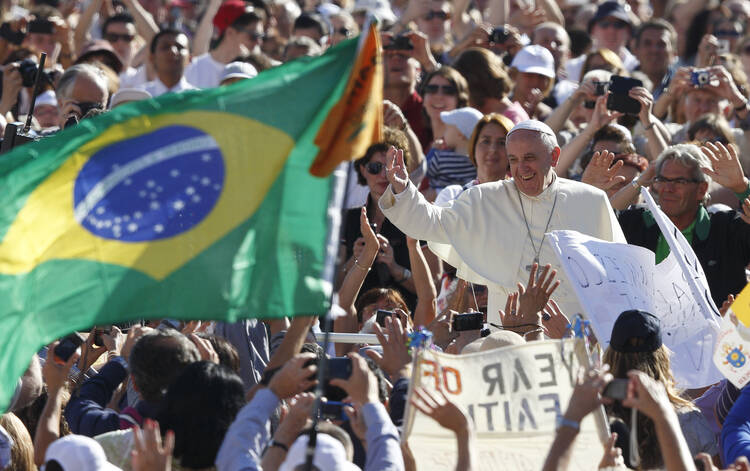 Pope Francis' refreshing messages and his willingness to embrace people of all walks of life can serve as an example for Americans divided by social issues and political ideologies, a Georgetown University audience heard.

Decrying a crisis in leadership in American government, four panelists Oct. 1 offered their take on the first six months of Pope Francis' papacy, saying the pontiff's expressions of humility are welcomed and offer a new path forward for the world.

"I cannot think of a single public figure, whether secular or religious who has inspired the level of civil discourse and substance and exchanges that this man has in just six months. It is remarkable," said Mark Shields, a Catholic and a regular commentator on Public Broadcasting System programs.

"Francis brings that sense of joy, the good news of the Gospel. Most of all he asks the question, not are you better off than you were, but are we better off. It's a message we need desperately in this country and in this world and I'm grateful for it," Shields told an audience of more than 600 at Georgetown's Gaston Hall.

The round-table discussion, titled "The Francis Factor," touched on subjects ranging from the example of servant leadership the pope offers to his growing influence on young people seeking guidance in an uncertain world. Each panelist also credited the pope for offering a new way of leading in a polarized political environment.

In opening remarks, Cardinal Donald W. Wuerl of Washington, described Pope Francis as carrying on the tradition of proclaiming the 2,000-year-old message of the Gospel, but in ways people are unaccustomed to seeing.

"By what he says and how he says it, Pope Francis is offering us a whole new way of seeing these ancient teachings. He's the new evangelization in action, calling us to go out ... to establish a dialogue with all people even those who do not embrace our faith," Cardinal Wuerl said.

Panelist Alexia Kelley, president and CEO of Foundations and Donors Interested in Catholic Activities, said she found Pope Francis offering a servant-leadership style that can help inform public life in the U.S.

"Do we have a day when the pope doesn't bring us to tears?" she asked.

"He's showing it not just in an intellectual sense or an academic sense, but he's living it very symbolically. So it's clear, powerful, and simple words and actions. He's showing us his integrity, an alignment of word and being."

Pope Francis also inspires others by his willingness to meet people "where they are," said Kim Daniels, spokeswoman for the president of the U.S. Conference of Catholic Bishops, Cardinal Timothy M. Dolan of New York. By doing so, his message on issues of peace and justice become clearer for society, she said.

The end result, she explained, is that Catholics better understand that they are called to stand together with poor and marginalized people, whether they are unborn children, hungry families or refugees in war-torn Syria.

"What I find so striking about the symbolism and actions that Pope Francis speaks through is that often they really mirror Jesus Christ," Daniels said. "The crowds come to him. Or particularly the children and the handicapped, we see Pope Francis reaching out and kissing and touching them. It's just a wonderful example of living the Gospel."

"He doesn't talk about loving humankind in the abstract," Shield said. "He's loving and caring to the people he runs into."

David Brooks, New York Times columnist and a PBS and National Public Radio commentator, said Pope Francis "looks like a Christian" through his actions and his public comments to Catholics and non-Catholics alike.

As the panel's lone Jewish member, Brooks said the pope offers society a good example of how to be countercultural in a materialistic world. "(The pope) can confront someone who is materialistic with grace," Brooks said, because he welcomes people into his world and seeks to engage them.

As the conversation turned toward how young people are drawn to Pope Francis, Kelley said the pontiff has given the church a new opportunity to spread the precepts of Catholic social teaching. She expressed concern that the secular political polarization in society has been projected onto the Catholic Church, leaving young people unsure of their role in the church.

"At a spiritual level, young people, like all of us, need something bigger than themselves," she said. "I think especially in our church, that they feel invited and included at the table."

The discussion was the inaugural program of the Initiative on Catholic Social Thought and Public Life, a new program at Georgetown headed by John Carr, former executive director of the USCCB Department of Justice, Peace and Human Development.

Catholic News Service
Show Comments (
1
)
Comments are automatically closed two weeks after an article's initial publication. See our comments policy for more.
Lawrence Lyons
8 years 7 months ago
Yes. This is a man who is truly open to the Spirit. God sends only the very best. How could he possibly fail?