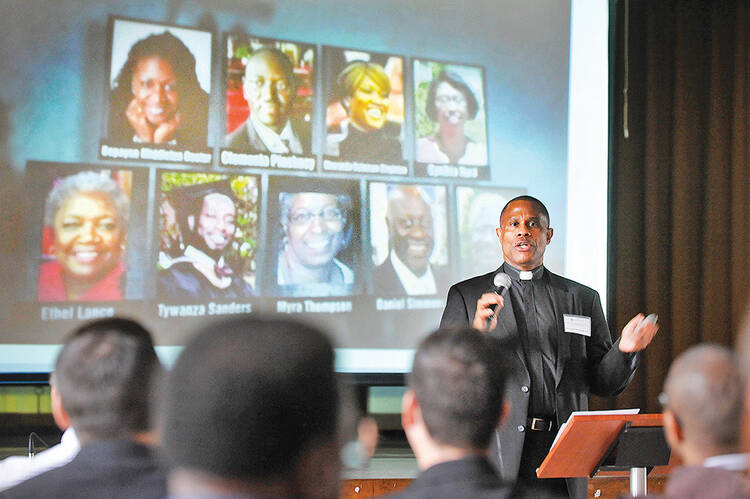 A “seismic shift in demographics” in both society and the U.S. Catholic Church in the coming decades will create a church that is far less white, the Rev. Bryan Massingale told an audience in New Orleans on Nov. 6. The church will be unprepared to deal with that reality, he continued, unless it addresses “the ongoing struggle for racial equality.”

Father Massingale made the comments in an address to priests, seminarians and other officials of the Archdiocese of New Orleans. The author of Racial Justice and the Catholic Church and a professor of ethics and theology at Marquette University in Milwaukee, Father Massingale said the church must become “a proactive agent for racial justice” if it is to “remain viable and relevant in the 21st century.”

He said the issues of racism and racial justice are not spoken of frequently by priests because the topics are so sensitive.

“When we get together, there is a tendency for silence,” Father Massingale said. “We don’t dare say anything because we don’t want to say something wrong or make someone upset. We don’t want to go there. Most of all, as priests, we want to be liked. Your parish is your family. You don’t want to alienate people. So, you’d rather keep silent than run that risk.”

Just as the topic of sexuality is sensitive, discussions about race “become emotional and visceral.” In his years of teaching a course on racial justice at Marquette, Father Massingale said it was not uncommon for “students’ eyes to glaze over. They can’t take any more in.”

“We have to acknowledge those emotions so we’re not paralyzed or overwhelmed by it,” he said.

While the church now is a mix of 60 percent white and 40 percent Latino, African-American and other ethnic groups, census figures indicate that by 2043 white will no longer be the majority race in the United States, he said. Those statistics have “wide-ranging implications” for the church’s formation and evangelization programs.

“The landscape of both the church and society is being significantly and dramatically altered,” Father Massingale said. “If we are going to be Catholic, our future can only be a brown one. The church is browning. It’s inexorable.”

The massacre of nine African-American worshipers in a Charleston, S.C., church is just the most recent reminder of the racial divide in America, he said, adding that there is other “subtle racism” exposed when anonymous comments are posted online in response to news stories involving race and ethnicity.

“Racism is a soul sickness,” he said, “a profound warping of the human spirit that enables us to create or tolerate callousness or indifference toward each other. Racism is a soul sickness that says some lives are worth less than others and some are beyond our concern. We are called to lament, to grieve, to mourn, to be aware because that’s what leads to racial conversion.”

Catholics can confront the sin of racism in a pastoral way by first recognizing their own “fears, blindness and need for education, growth and healing,” he said. “But there can’t be fire in the pew if there’s ice in the pulpit.”

From AP, CNS, RNS, Staff and other sources
Show Comments (
3
)
Comments are automatically closed two weeks after an article's initial publication. See our comments policy for more.
Chuck Kotlarz
7 years 2 months ago
President Lyndon Johnson launched the Great Society Higher Education Act in 1965 to help to lessen the economic divide between poor and rich American families. Blacks residing in liberal dominant states today are 40% more likely to have a bachelors, graduate or professional degree than blacks residing in conservative dominant states. In dominant party states overall, at least 75% of Congressional members and Governors come from the dominant party. The dominant party also has a majority in at least 75% of both state legislatures.
Roberta Lavin
7 years 2 months ago
"Racism is soul sickness" is an excellent opening for discussion. I have sadly found that pastors are all to willing to offend those who believe in equality for women in the Church or in equality for homosexuals, but not when it risks offending or upsetting those with conservative and all manner of bias against others. Words will always ring as rather disingenuous so long as the Church actively discriminates large segments of society in the name of God.
Chuck Kotlarz
7 years 1 month ago
The ACA is helping reduce inequality. In 2014, blacks eighteen and younger were no more likely to be uninsured than whites. See link below for details: http://www.bloombergview.com/articles/2015-12-17/obamacare-is-closing-insurance-s-race-gap