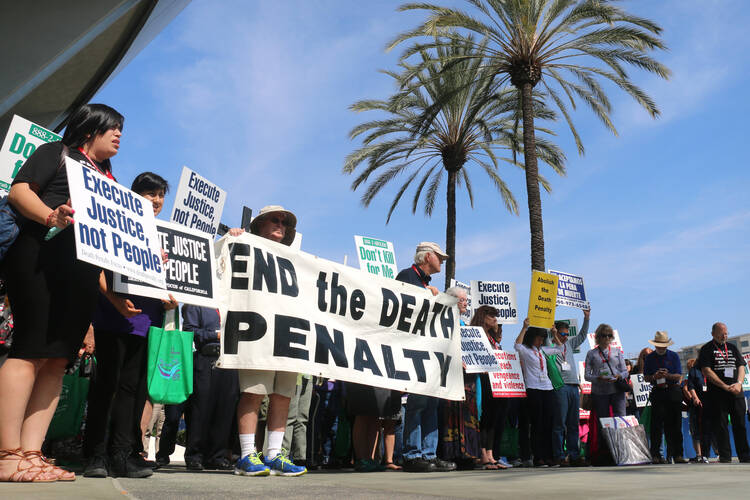 The California Catholic bishops are urging voters to support a November ballot initiative that would outlaw the death penalty.

Proposition 62 would replace the maximum punishment for murder with life in prison without the possibility of parole.

In New Mexico, the Catholic bishops of that state renounced a call by Republican Gov. Susana Martinez for the Legislature to reinstate the death penalty. They urged state lawmakers to reject the legislation. The death penalty was abolished in the state more than seven years ago.

In his remarks, Archbishop Gomez noted that the Catholic Church has consistently taught for centuries "that legitimate governments have the right to impose the death penalty on those guilty of the most serious crimes," he said. But in recent years, he continued, "there has been a growing consensus that the use of the death penalty can no longer be accepted."

"On his final visit to our country in 1999, St. John Paul called the death penalty 'cruel and unnecessary.' And it is true," he added.

The Los Angeles Archdiocese has established a website about the ballot initiative on the death penalty and church teaching, www.killingisntjustice.org.

By opposing the death penalty, Archbishop Gomez said, people are "witnessing to the sanctity of life," but also are not forgetting "the victims of crime and their loved ones." "We entrust them to the Father of mercies and we pray that he grant them healing and peace," he said.

"Killing the criminal does not bring justice to the victims," he added.

Archbishop Gomez also said that U.S. society has "a strange appetite for violence. ... We allow children to play violent video games and listen to music that demeans human dignity. For 'entertainment,' we watch movies and shows in which fictional criminals take other people's lives and commit unspeakable acts."

California's bishops also have urged voters to say no on Proposition 66, which would amend state law in an attempt to speed up the judicial review of death penalty cases. "Any rush to streamline that process will inevitably result in the execution of more innocent people," the bishops have said.

They have urged voters to support Proposition 57, which would increase parole and good behavior opportunities for felons convicted of nonviolent crimes and allow judges to decide whether to try certain juveniles as adults in court.

In the Archdiocese of San Francisco, the Office of Public Policy and Social Concerns is in overdrive promoting the Catholic Church's call for the death penalty repeal.

By mid-September, more than a dozen parishes had formed and trained voter outreach and registration teams.

"Many of our people don't know, if you ask them, what these propositions are about," said Julio Escobar, coordinator for the archdiocese's restorative justice program. He and colleagues Lorena Melgarejo and Carolina Parrales met with the archdiocesan Council of Priests in early September to seek support from pastors for educational outreach visits to parishes and schools which would include after-Mass voter registration.

"The Jubilee Year of Mercy presents a key opportunity for us to respectfully engage and educate parishioners and help them vote according to their values," Escobar told Catholic San Francisco, the archdiocesan newspaper.

Results of a survey of Californians released Sept. 16 showed that more than half of voters oppose the ballot measure to abolish the death penalty.

The San Francisco Archdiocese planned to continue voter registration until the deadline of Oct. 24 and parish educational outreach until the Sunday before election day.

"As California citizens, we have an opportunity to make our voices heard on behalf of the inviolability of human life and for rehabilitation over retribution," San Francisco Archbishop Salvatore J. Cordileone said in a Sept. 20 column in the archdiocesan newspaper.

He recalled being part of a delegation of California bishops who three years ago paid a pastoral visit to San Quentin State Prison.

"We had the opportunity to meet with a number of the inmates on death row, hearing their stories, learning of the misfortunes in their lives, and becoming sensitized to their deep spiritual yearnings and innate desire for God," he said. "The experience put a human face on a tragic human condition that we very comfortably can -- and usually do -- completely ignore."

"This experience also highlights the challenge we as a society face in determining how we can foster peace in this increasingly violent and complicated world. The answer is certainly not by inflicting more violence" through capital punishment, he added.

"There is one seamless teaching on God's gift of life that must be protected from conception in the womb to natural death," they said. "It is always tragic and sad when a member of the community is murdered. These senseless acts must be prevented by calling for systemic change in society beginning with our youngest children. Crime can be prevented, and this is done by an investment in social capital."

In 2009, in lieu of the death penalty, the state of New Mexico "created life in prison without the possibility of parole," the bishops noted. "This renders a perpetrator harmless to society."