The Beginning of a New Journey to Peace in the Holy Land? 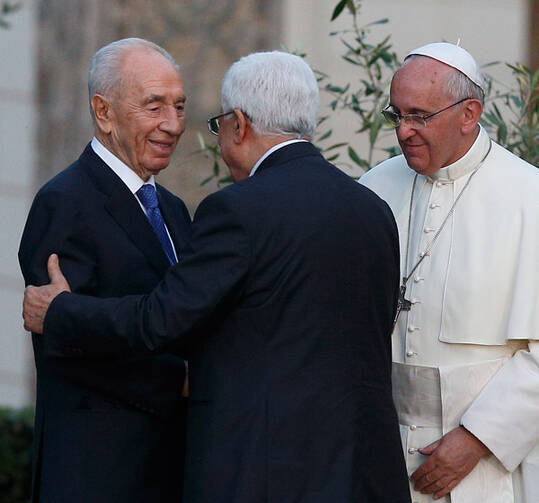 “It is my hope that this meeting will mark the beginning of a new journey where we seek the things that unite, so as to overcome the things that divide,” Pope Francis said in a forceful speech concluding the historic Prayer for Peace in the Holy Land, held in the Vatican Gardens on June 8 and broadcast live by television to Israel and Palestine.

“More than once we have been on the verge of peace, but the Evil One, employing a variety of means, has succeeded in blocking it,” he said, referring to the failed attempts to broker peace between Israelis and Palestinians over the past 66 years. “That is why we are here—because we know and believe that we need the help of God.”

That sentiment was shared by Israel’s President, Shimon Peres, and Palestine’s President, Mahmoud Abbas, elder statesmen who had, as Peres said, “experienced war and tasted peace,” whom Francis had identified as men of peace and men of faith.

For over half a century negotiators had excluded the religious dimension from the peace process, even though most of the Holy Land’s 12 million inhabitants—Jews, Christians and Muslims—believe in the one merciful God. By inviting their presidents to pray with him, Pope Francis brought God back to center stage. Such a high profile event has no precedent in the history of these lands. It was the pope’s brainchild, not the fruit of Vatican diplomacy. He was joined at the prayer gathering by Ecumenical Patriarch Bartholomew I of Constantinople.

Pope Francis originally intended holding it in the Holy Land during his historic meeting in Jerusalem with Patriarch Bartholomew. Political obstacles prevented that, however, so he hosted it in a neutral setting in the Vatican Gardens: a triangular lawn, closed off on two sides by high hedges, with St Peter’s dome in the background. It was an idyllic setting for prayer: only the sounds of water flowing in a nearby fountain and birds singing in the trees broke the silence.

As the sun set, the pope, the patriarch and the two presidents arrived in a white minibus and joined the 18-member interfaith delegations from Israel and Palestine and the papal group. There followed a meticulously prepared hour-long prayer service in three parts: first Jewish, then Christian and Muslim. The format was the same for each: praise of creation, plea for forgiveness, invocation for peace. Each prayer was followed by a musical interlude provided by Jewish, Christian and Muslim musicians.

Israel’s President Peres agreed. “We must put an end to the cries, to the violence, to the conflict,” he said. “We all need peace. Peace between equals.” Peres, who reportedly reached a peace agreement with Abbas in back-door negotiations in 2011-12 only to have it rejected by Netanyahu’s government, said, “Peace does not come easy. We must toil with all our strengths to reach it. To reach it soon, even if it requires sacrifice or compromise.”

President Abbas, who connects well with Peres, said Palestinians “are craving for a just peace, dignified living and liberty.” He added, “Reconciliation and peace are our goal.” Indeed, “we want peace for us and for our neighbors. We seek prosperity and peace of mind for ourselves and others alike.”

After the speeches, Francis, Bartholomew, Peres and Abbas shook hands and together planted an olive tree before retiring to talk in private.

Can Pope Francis’ introduction of God into the Israeli-Palestinian conflict open a new horizon for peace? Can it change the political climate between these two peoples by creating a dynamic that political leaders cannot ignore and in which religion can make a positive contribution? Perhaps we will only know the answers to these questions when the olive tree has produced its first fruit.

Gerard O’Connell
@gerryorome
Show Comments (
1
)
Comments are automatically closed two weeks after an article's initial publication. See our comments policy for more.
Beth Cioffoletti
8 years 4 months ago
If anyone can pull off prayer, Francis can. I am still pondering the power of these photos. The image of Peres, Abbas, Barholomew and Francis from behind, walking down a path together. All sons of Abraham. Does interesting things to our conscious and unconscious perceptions of who and why we are that words can't reach.