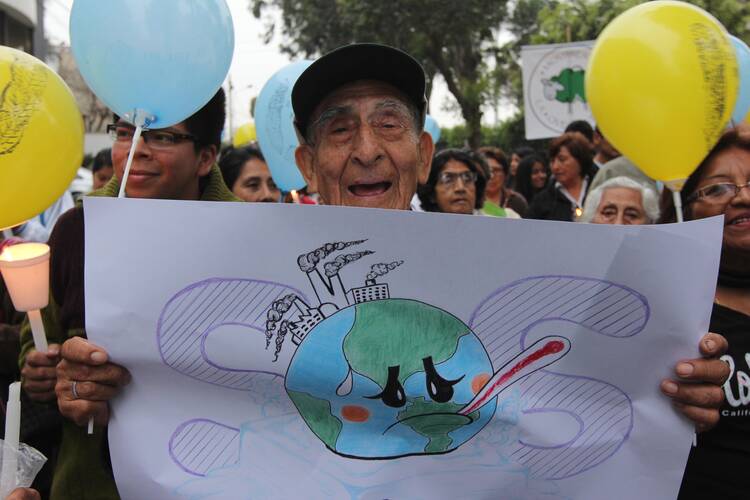 The much-anticipated encyclical by Pope Francis on the environment, expected sometime this spring or early summer, is generating a lot of buzz in Washington and elsewhere.

At the Catholic Social Ministry Gathering, a Feb. 9 panel discussion on climate change and other environmental issues had to be moved to a larger room.

"We usually get 15, 20 people," said Dan Misleh, executive director of the Catholic Climate Covenant, prefacing his remarks. Surveying the scene in the larger room, he added, "It's never been this full."

In St. Paul, Minnesota, in November, there were hopes that an address by Ghanaian Cardinal Peter Turkson, president of the Pontifical Institute for Justice and Peace, at Catholic Rural Life's "Faith, Food and the Environment" symposium would give listeners an early glimpse into the mind of the pope in hopes that the cardinal and the pope were of like mind on the topic. However, Cardinal Turkson was reassigned to coordinate the Vatican's response to the Ebola crisis and never made an address.

But in Washington, like-mindedness can be hard to come by. "Already there are people criticizing the pope" over the encyclical "and they haven't even seen it," Misleh said.

Franciscan Sister Ilia Delio, director of Catholic studies at Jesuit-run Georgetown University in Washington, noted one remark by Pope Francis: "This is our sin, exploiting the earth."

"Do we really love the earth that is our home?" Sister Ilia asked, noting the pope's reference to sin. "It's a collective sin. We have become radically disconnected from the earth and from the poor," she said.

Sister Ilia acknowledged "a little bit of ambiguity" in the biblical injunction of humans to have "dominion" over the earth. "Does nature exist for the sake of human life, and what does that mean for us?" she asked.

She also noted a separate remark by Pope Francis, in which the pope said, "One of the greatest challenges of our time (is) to convert ourselves to a type of development that respects creation." Sister Ilia said the comment harks back to the papal namesake, St. Francis of Assisi, who moved his orientation "from a self-centeredness to a cadre-centeredness."

"We tend to hold on to things as if they are ours, as if we own them," she added. "According to (St.) Francis, anything we cling to or hold on to prevents us from letting God in."

Sister Ilia described sin as "the exile of living in non-relatedness," in which a person acts as if "I don't want to live in relation to the earth or to the poor."

"We have become such capitalists," she added, "we have lost sight of what money is for."

Misleh quoted Cardinal Oscar Rodriguez Maradiaga of Tegucigalpa, Honduras, who said, "Man finds himself to be a technical giant and an ethical child," and asked the audience to consider how that applies to environmental ethics.

If only 5 percent of the estimated 75 million U.S. Catholics got involved in environmental matters, Misleh said, that number would be three times the size of the World Wildlife Fund's 1.3 million members.

Climate change is gaining attention in different and unexpected quarters, he added. "The Pentagon and insurance companies are looking into it. So there must be something to this," Misleh said. "There's going to be some pain as we transition to a more sustainable future."

Eric Garduno, senior legislative specialist in Washington for Catholic Relief Services, pointed to a map of countries colored by the suspected impact of climate change on their populations. Sub-Saharan Africa fared worst of all nations, with those nations directly south of the Sahara the worst of the worst.

The U.S. Agency for International Development is dealing with adaptations to climate change with poor farmers, helping with such initiatives as clean energy programs and dealing with deforestation," Garduno said.

A CRS project in Ethiopia stymied the cycle of topsoil-eroding downpours on barely arable farmland by developing terraced plots that retain the rainfall and help the crops planted on the terraced land to grow.

CRS, the U.S. bishops' overseas relief and development agency, prepared a report, "Tortillas on the Roaster," about the potential for climate change to take out land for cultivation in Central America. "We don't want folks, in Central America or anywhere, to have to make that decision" between fewer crops to plant or trees felled to find new cropland.

Misleh said the Catholic Climate Covenant was preparing for the encyclical's issuance with the help of a 12-week program on the encyclical developed in conjunction with Renew International, and taking part in joint events with interfaith groups that are keeping their eye out for the encyclical.

"Our ecumenical and interfaith partners seem even more excited (about the encyclical) than we are on some days," Misleh said.