'Religious Liberty' on Agenda In Baltimore and White House 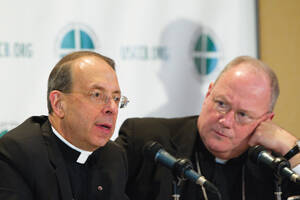 A lengthy report opening the U.S. bishops’ annual fall meeting in Baltimore, Md., on Nov. 14 painted a dour picture of the state of religious liberty in the United States. But an “extraordinarily friendly” meeting at the White House seemed to reduce some of the tension that has been building between the Obama administration and the U.S. bishops in recent months. Following a meeting with President Obama on Nov. 8, Archbishop Timothy M. Dolan of New York, the president of the U.S. Conference of Catholic Bishops, said he left the Oval Office “a bit more at peace about this issue than when I entered.”

Archbishop Dolan described the meeting as “very candid.” According to the archbishop, the president promised to look “long and hard” at the church and state conflicts that have arisen over the last year that the bishops argue represent infringements on religious liberty.

“I would say there were areas of agreement and disagreement,” said Archbishop Dolan; “I found the president of the United States to be very open to the sensitivities of the Catholic community” regarding its concerns over religious liberty. Those concerns have recently been provoked by conflicts over gay marriage and civil union laws that have been driving Catholic agencies out of social services and proposed federal requirements that would compel that all health insurance packages include contraception, sterilization and abortifacients.

Archbishop Dolan said the meeting touched on a wide range of topics but that by mutual agreement with the White House, details of the meeting would not be made public. He added that the current issues related to religious liberty might be an area where there is room for compromise “as long as we’re not compromising our principles.”

Speaking at the general assembly, Bishop William E. Lori of Bridgeport, Conn., chairman of the new Ad Hoc Committee for Religious Liberty, outlined a range of actions by government agencies perceived by the U.S. bishops as threats to religious rights. He explained the Constitutional and natural law concerns the ad hoc committee aims to address and cited some specific clashes between Catholic teaching and federal laws and initiatives. In addition to the interim health care requirements, the Department of Health and Human Services also recently denied a one-year grant to the U.S. Catholic bishops’ Migration and Refugee Services to aid foreign-born victims of human trafficking. The attention has focused on requirements in the guidelines for the new grants that called for agencies to offer the “full range of reproductive service,” including abortion and contraception, to victims.

Bishop Lori also cited the Department of Justice’s shift from defending the Defense of Marriage Act to opposing it in court “as an act of ‘bias and prejudice’ akin to racism, thereby implying that churches which teach that marriage is between a man and a woman are guilty of bigotry.”

He said the bishops see a pattern in culture and law to treat religion “as merely a private matter between an individual and one’s own God. Instead of promoting toleration of differing religious views, some laws, some decisions and some administrative regulations treat religion not as a contributor to our nation’s common morality but rather as a divisive and disruptive force better kept out of public life.”